That’s a question that many game developer ask or just wonder about. I just realized that through the course of years I made games of very different genres, so I checked some stats and came up with the following “ranking” which I hope will be useful to someone:

those represents total sales though, and are somewhat misleading because there are other factors to consider. First, in the visual novel category there are 4 games but the sales difference vs the strategy/simulation isn’t so big, so each individual game on average sold less than the strategy/simulation ones. Second, I should also consider ROI for each game. How much time I spent vs the revenue obtained for each game? I never calculated it exactly but I can fairly accurately say that the first titles (sports simulation) were the best ROI for me (took me 3-4 months each). But it could be so only because they’re also the oldest titles 🙂

Anyway, that’s more a fun statistic than anything to be taken too much seriously, but even talking with other programmers, it seems clearly that RPGs are the best selling genre for indie games. Probably because there aren’t many around (if you exclude RPGMaker ones, otherwise there are a LOT! :D)

Dating sims share also many elements with RPG (statistics, dialogues, relationships, etc), while sports simulations are very hard to make, but can provide good revenues if they’re original enough. Visual novels can be profitable if made quickly and without spending too much on assets, and strategy/simulation last place is really to be taken with a grain of salt: after speaking with many devs who shared revenues with me privately, if you do a good 3d strategy game this genre can easily beat all others, on par with RPGs.

Just a short blog post to inform everyone that the game Vera Blanc: Full Moon is now available for the iPhone, iPad, and as a webgame.
Check the links below:
IPHONE VERSION – IPAD VERSION – WEB VERSION

The web version in particular is quite interesting since it plays until the demo ends, and you can then purchase the game and enter the purchase email and resume playing the game immediately. Let me know what you think about this solution since I might adopt it even for future episodes of Vera series (which won’t be out before next year, as I said). 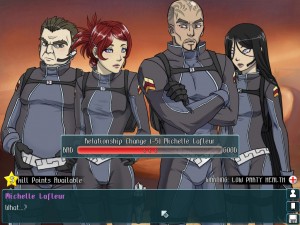 Today’s question is: does make sense to have replayability in an indie CRPG ?

After venturing deep inside the crystal castle to discuss with the supreme wizard of gameplay design face to face (that’s me looking into a mirror), I’ve come to this conclusion: No.

Let me elaborate. With a visual novel or dating sim, or even life simulation like Spirited Heart, having a gallery of several different endings could make sense. Since it’s part of their gameplay: replaying the game choosing a different path, job, skill etc. But a decent RPG should have hours and hours of fun!

Story-based RPGs like Planet Stronghold can last quite a lot of time: I am now writing the part where you venture into the wastelands, and some battles can even lead to “game over”, but in general if you lose a battle you can retry in most cases. This means that you can spend 15-20 minutes in a battle and lose it, and retry with a different party configuration / approach. Even assuming that you will win all battles at first attempt, right now there are already 30 battles in the game. Multiply 30 battles for 4 minutes each (4 minutes is an insane low amount of time, totally unrealistic!) and that makes already 2h of gameplay just for the first 3 chapters (a really low estimate as I said, since doesn’t include dialogues either). The final game will have 10 chapters.

What does this means? It means that this game once finished can last 20-25 hours or even more, like commercial AAA games. I know that SOME people probably replayed Dragon Age or Mass Effect to see different endings, but how many really? I never did that, because I don’t have the time, but even if I had it, after playing the whole game from beginning, I don’t think I would like to replay it from start.

As indie, making CGs is expensive. The ones of Planet Stronghold will be absolutely beautiful, probably the best one ever seen in one of my games. If each ending corresponds to a single CG (like happens with my other games), most people aren’t going to see them all, and that’s a pity. I feel like wasting my money for content that only a minority will be able to see.

So, I’m thinking what to do. Those CG were intented for the romance endings, so each CG would be Joshua or Lisa with one of those characters (won’t say which ones but you can guess). I thought about two possible solutions:

1) I was thinking instead if to integrate them in the story, like The Witcher did (a CG in certain specific point of the plot, with voiceovers, I think that worked really well) or 2) at least make it possible to see them allfrom a certain point of the game.

For example, while each character relationship will influence how well he/she fights into the battle, at a certain point of the plot you will be able to save and from that point you can reach any possible romance ending, no matter what you’ve done before. That way at least player could have only to replay something like the last 2 chapters or so.

I think this solution might work well and that’s the one I’m probably going to adopt, since I want everyone to be able to see all the various endings without having to replay from start.

Obviously, since you pick the gender at beginning of game, if you want to see the ending of the opposite gender you WILL have to restart from scratch with that one 🙂

Just a short blog post to inform everyone that there’s a “story-mode” version of my game Flower Shop available for iPhone. The game has been subtitled “Summer in Fairbrook” to differentiate it from the sequel that is still being worked on and will have a winter theme instead.

This version focuses on the story, so doesn’t include the weekly scheduler or the farming sim, but instead the whole story was re-arranged and now the game features over 9h of reading and 5 different endings.

Definitely a visual novel more close to a book, with a wonderful story and beautiful art (indeed it’s under the “Books” section on the Appstore). The game will be available shortly also on iPad and possibly Android.

More of my games are being ported and will come soon on iPhone/iPad/Android so follow my twitter/blog to know more!

Yep…discussed with the artist Rebecca who is totally busy doing webcomics until this December, but there might be a 3rd chapter of the Heileen series. But really different from the previous games! I don’t want to anticipate too much but while it will have a strong visual novel element, it will also mix with other kinds of different gameplay.

I’ll try to be vague but I have to spoil something so if you haven’t yet played the game, maybe don’t read below 😀

The premise would be that at the end of the 2nd episode, you would end up in the pirate ship with M. Then you would wander around a mysterious caribbean archipelago to find out the missing companions from the first episode. So it would be a sort of “find all the remaining characters”. But it’s not just that: the game would have a bit of RPG (I might even include a VERY SIMPLIFIED version of Planet Stronghold combat) and some adventure parts (use object X on target Y).

For now is all just pure fantasy since I have nothing written down yet, but if this happens it might be:

so yes a rather unique combination as you can see. I like a lot the idea/setting and the kind of resulting gameplay could be quit interesting. If this goes on the game might be done probably by next summer, depending how other projects evolve in the mean time!