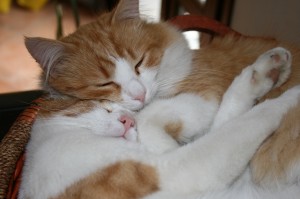 In the picture above, Mirtillo and Othello sleeping together peacefully. I wonder what they’re dreaming ?

I want to wish everyone reading this blog/following me Merry Christmas! 🙂

Then, a quick status update about Planet Stronghold 0.8 (since is the game I’m currently working on). In the recent weeks had some eyesight problems, so the programming has been slowed considerably. I really hoped to have it ready by Christmas since would have made a great present… but sometimes, real-life problems get in the way and so I had to post-pone the deadline to end of the year!

I’m writing the latest two quest, regarding the Apex Rahn and Arnox races, including two boss fights. I think once you play the game you’ll realize why is taking me so long to make… because the game IS long! The part I’m writing now involves all the races, and if you side with the Empire you have to eliminate them, instead if you side with the King/Shiler you will unify them and form one single alliance.

So this part is the “core” of the game, the biggest one. If you played the demo, this part is basically 5-6 times longer than it…and you can play from two different sides, so some parts are different! That is also why the final release price will be $24.95 (so you have still one week to get it at the deal price of $9.95!). And now, for some postmortem-retrospective about the year that is about to end:

I admit I was excited about it (since I am a Wood Tiger in chinese horoscope). Well, my goal for 2010 was to release 5 games, and I was particularly excited about (quoting from my last year post):

And I am producing the art now for a new kind of game style that I hope will be a great success, since I like a lot writing the stories and the storyboards for it. For now I can only say that involves detectives, mystery, and a beautiful blonde girl with a French accent…

I was obviously talking about Vera Blanc, which as you might know, turned out to be a real disappointment in term of sales 😀

So, in 2010 I released The Flower Shop, Card Sweethearts, Vera Blanc: Full Moon, Vera Blanc: Ghost In The Castle. Not only I didn’t release 5 games as I had planned (even if I’m almost done with Planet Stronghold), but most of them didn’t sell well at all! So in all honesty, considering also the other real-life problems I had, 2010 was probably my worst year since I was indie. For the first time in 7 years or so, I didn’t grow my business. During the summer and autumn, I thought it was something beyond my control, the global crisis, the return of middlemen and so on (since also many other indies had very low sales during that period) but if I think about it carefully, it was my mistake for producing games without doing proper “market research”.

Vera Blanc got the most positive reviews I had for a game, on famous sites like Gamezebo & Gamertell. And it has some fans that are eagerly waiting a 3rd episode. Still, it would be foolish for me to release another one using the same gameplay system… so even as indie, you can’t simply do any game you want to do (unless it’s an hobby) but you must also identify the market you want to sell to, and make sure you have the right product. Making a good/original game just isn’t enough, if that game has a very small fan-base.

Next friday, more cats pictures and my plan for the 2011 which hopefully will be a better year 🙂