As you probably are aware already if you follow me on the social networks, my sci-fi RPG Planet Stronghold is now available on Steam. Above you can see the game trailer (the info at the end is outdated though, the game is also available on iOS).

I’ve already talked in the past about the game, in particular shortly after I released it, and is fun how Steam rejected the game back in 2011, and now 3 years later there it is! They have underestimated the power of the Wolves! 😉

Jokes apart, while I still consider Loren my best game, I’m quite affectionate to this one for two reasons: was the last game I wrote completely on my own (however is better if real native English writers take care of this aspect now!) and the first RPG/VN hybrid I made, which saved me from a sure bankrupt and put me back on track to stay indie for more years.

Seasons Of The Wolf Beta

Meanwhile, SOTW beta made a lot of progress in this last week. I admit I am a bit burned out because of how many bugs I fixed and how much balancing tweaks I made!!

First of all, while the stats-derivation method was delivering really well balanced fights (as expected) it had a huge problem: since everything was based on players behaviors, I had no reference for the battle difficulties. I couldn’t tweak a battle, I couldn’t lower or increase HP, Attack, Speed of the enemies because every time they would be different for every player 🙂

So, I had to discard the system after a few updates. Oh well, I’ve tried. Live and learn!

At one point I even took a screenshot of all the 4 difficulty mode of a boss enemy to compare the differences: 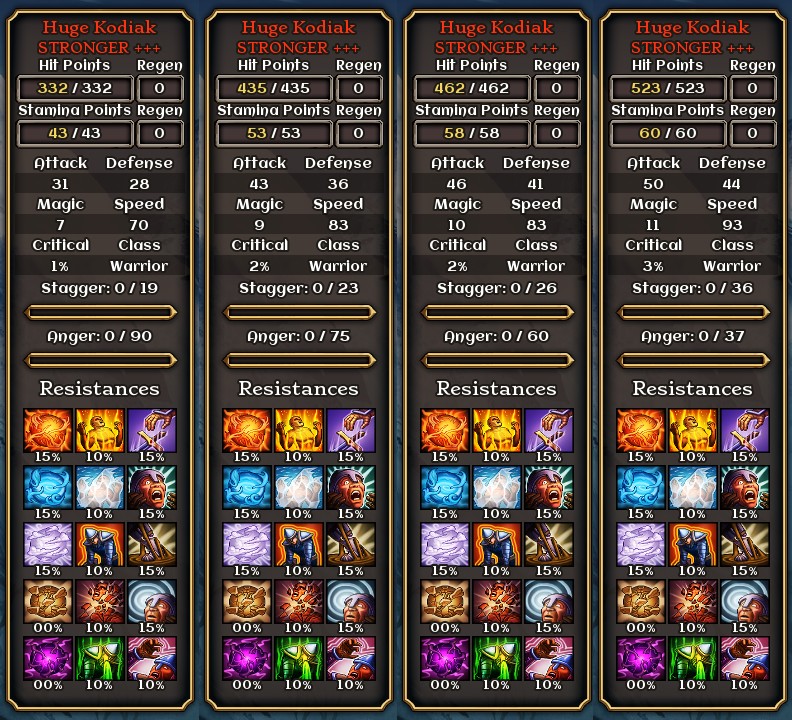 The Huge Kodiak is a boss battle in a sidequest

…yes as you can guess, I went a bit insane 😀

All of this while fixing at least 5-6 major bugs daily (in first days even 10-15!!). It is good of course, and now that I have a much bigger following is even expected, but it was quite exhausting for me. Anyway, now everything seems to be working, so I can move on coding the second Act of the game.

I’m probably going to open preorders once I have finished the second act (and is in beta) so I’m at a good point of the game.

Stay tuned because next week will resume talking about C14 Dating, the new upcoming otome game 😉

17 Responses to Planet Stronghold on Steam