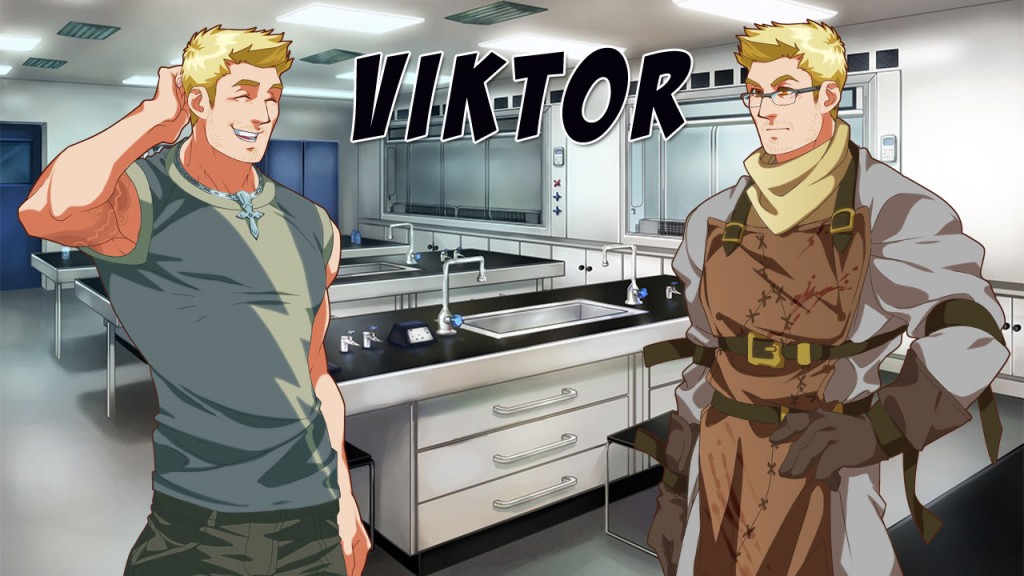 First of all, PSCD is now out on Steam, so if you bought direct you can redeem the key as usual from this site: http://bestanimegames.com/steam/

And now, let’s introduce another character of Love Bites:

Viktor is among the rarest of people, those who are aware of the supernatural, but remain essentially human.  Often such individuals transcend their human self, whether by becoming something decidedly non-human, or else pick up torches and pitchforks to hunt it down.

Viktor is neither; instead, he is a scientist, documenting all that he notices until he can reveal it at a later date.

Initially, he was one of those skeptics who would laugh at someone if they mentioned believing in ghosts, or having seen a UFO.

However, his certainty suffered its first crack when he went on a ghost-hunt and encountered a real ghost.  At first, he assumed he was the butt of some elaborate practical joke, but his fellow classmates were just as astonished with what they witnessed.  In fact, the only person who didn’t seem surprised was his teacher at the time, Nadia.

Viktor eventually wrote the incident off…until, one night at a bar, he noticed something strange with the bouncer.  Whenever he greeted people at the door, the peoples’ breath would coalesce in the warmth, but not the bouncer.  Ever observant, Viktor couldn’t help but notice the reflection of the customers in the window…but the bouncer didn’t have it.

Remembering the ghost incident from earlier, Viktor realized there was more going on around him, and decided to dedicate his life to the paranormal.  While retaining his major in physics, his grades are starting to flag…and irritating his family in the process.  Considering they were covering his college tuition, they figured he was throwing away his future…and their money.

This was a blessing in its own way.  Before, Viktor was quite reclusive, but if he wanted to continue his studies, he would have to interact with the rest of the world.  He enjoyed the independence this fostered, and he wouldn’t go back.

It’s not that Viktor is a party animal, but if he wants to learn more about those who aren’t quite human, then its best to study them in their natural environment, as it were.

With the widening of his world-view, Viktor has come to reconsider just what is science.  After all, it isn’t like the two realms have to be divorced; chemistry arose from alchemy, and astronomy from astrology.  Perhaps those who thought they could reanimate the dead might not have been as wrong as they thought…

I’m making good progress in all the other games: Heirs & Graces scripting is going at good pace, same for Queen Of Thieves (I’m reviewing all the scenes/choices and adding relationship changes and other stuff). Writing is going well on the other games like Undead Lily, Roger Steel and more.

And in case you didn’t know, C14 Dating beta is at a very good point. It’s already completely playable without errors, people are only finding minor stuff and typos, so if you want to check: http://winterwolves.com/c14dating.htm