PSCD free DLC is now out! 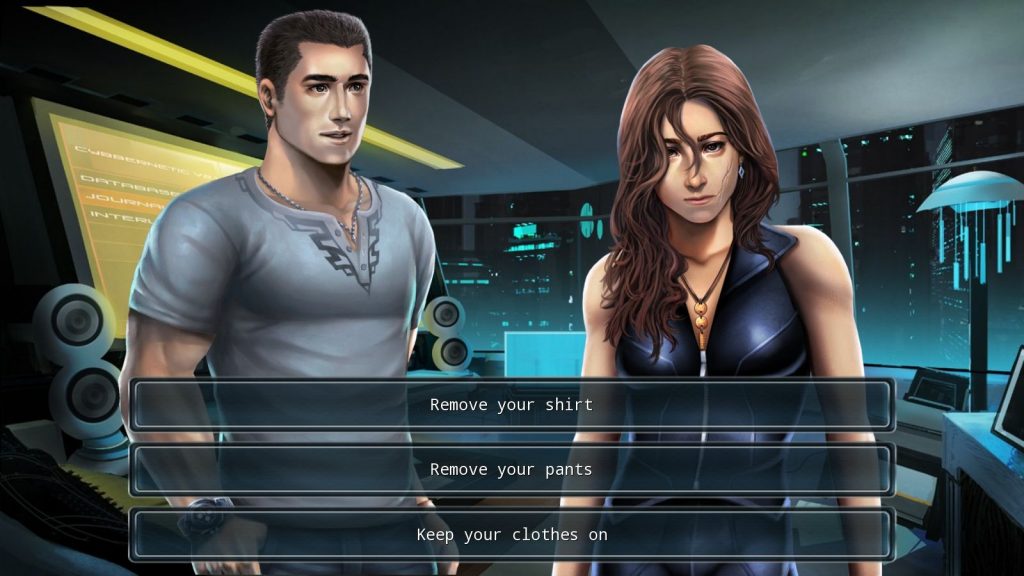 As you can see from the screenshot above, there will be some very “tough choices” in the free DLC! 😉

Jokes apart, I’m pleased to announce that I’ve updated the PSCD live version on my site, which you can download from this page: http://winterwolves.com/pscd.htm with the promised free DLC update contents.

Note: If you have already bought and activated the base game with email/serial, you’ll need to do it again in the game main menu to access the new content!

For those who still don’t know, the free update (which was supposed to be a paid DLC) adds the possibility to romance Kaden, Galina, Lola and Christophe. All four characters are bisex, so in practice this adds EIGHT new romance routes. For free. Yeah, don’t get used to get free stuff like this, since it won’t ever happen again! 🙂

It also adds the “Quick Play” mode, which lets you do quick matches against ten predefined enemy decks. You can also tweak the AI resources, so you can tailor the game’s difficulty to your skills.

The update will come shortly to the Steam version (maybe even next week), since if you bought it only there and not also on my site, you won’t be able to get the extra content yet. I still want to promote it as a DLC (but of course a free one) on Steam, hoping to get some extra visibility for the game, something that it didn’t get on launch.

As for mobile, I wanted to wait for all the content to be ready so I could do the port in a single step (since updating on mobile is a bit of a pain). I am also waiting for an update on Ren’Py libraries (that’s why C14 Dating is not out on mobile too).

Anyway all things considered I think it should be available on Android/iOS/Kindle maybe next month, for sure during this Summer.

Why a free update?

It was a mistake on my part – I was so sure that the game would have been a hit, that I planned a DLC already. Something that you should never do until the game is out 😉

Now I know the game will never be a hit, but not a bad seller either. It’s just that has been much harder to make money as indie in general, vs a few years ago.

Anyway since I had already the romance CGs and all the romance routes written, I didn’t want to throw it away. But of course, I didn’t bother to code all the DLC story (yes, a sort of mini-story of 11 missions was also planned to go along this DLC) even if I still managed to add the Quick Play mode.

As I already posted in my forums, even if I enjoyed a lot working on this card game, unfortunately I couldn’t justify spending more time on this than I already have. My revenues from the game so far (divided by the months I spent working on it) are way below the minimum wage here in my country 😀

But I’m still happy, since now I have a card framework which I can reuse in future games, and I’ve learned a things or two about what people want in term of artwork (hint: cute manga art, avoid uncanny valley effect, etc). I’m an optimist by nature, so even for the projects that didn’t come out well, I think they still provided me valuable info and I’ve always learned something.

As some wise man said (Confucius): “He who learns but does not think, is lost! He who thinks but does not learn is in great danger.”

42 Responses to PSCD free DLC is now out!