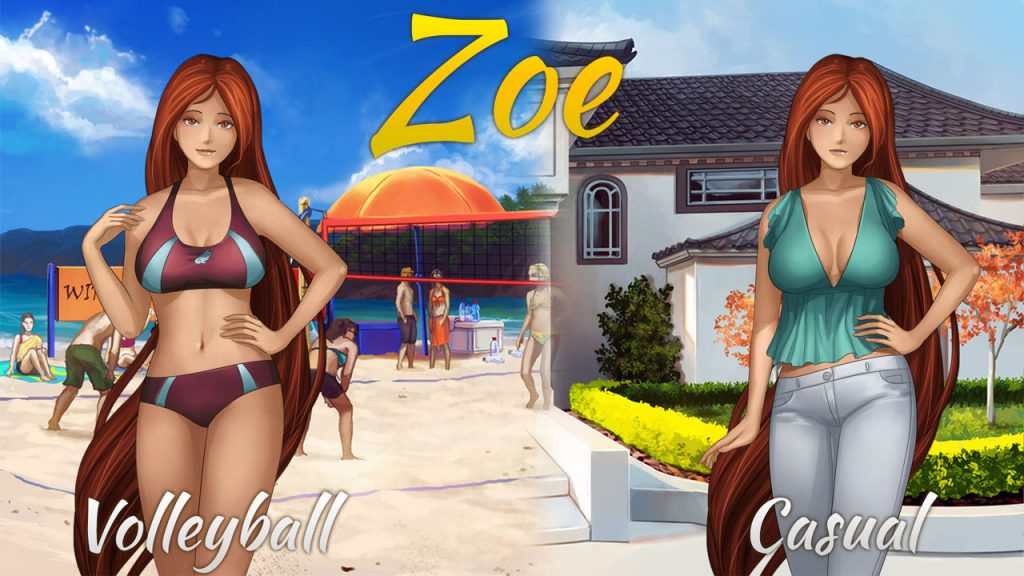 As usual, in the next few blog posts, I’ll introduce the characters of my newly announced game “Volleyball Heaven” with the help of the game writer 🙂

We start with one of the most controversial/unique character of this game (well, she’s in good company though!). The only thing I’ll add is that fans of the Chambara’s romance CGs from Loren can find a new mistress in Zoe 😉

Also, in the introduction images I will show the character in the volleyball uniform and casual outfit. However there are several more outfits and, ahem, underwears that you can see in game… if you really must see the girls dressed. Otherwise, we got you covered! 😉

According to Lana, if Zoe ever wrote a self-help book it should be called ‘How to Lose Friends and Alienate People’.

After her parents die in a light aircraft accident when she was ten, Zoe was formally adopted by Jade’s parents – her paternal uncle and aunt, who perhaps hoped her assertiveness and self-confidence would rub off on her far more reserved cousin.

Never shy of being herself and precociously self-aware, at the age of 14 Zoe announced she was a lesbian. When she was 16, she founded and front-lined Asgard’s first (and as yet only) lesbian death metal band, Apocalypse Sunrise, whose legend lives on even today.

Unmoved by the oft-expressed opinions of her dismayed foster parents but lacking the disposition to acquiesce to the overwhelmingly macho culture of the music industry, she wound up the successful band just shy of her 18th birthday and embarked on the one true cause of her young life – encouraging women to free themselves from patriarchal tyranny.

Using some of her inheritance as a scion of the wealthy and politically powerful Markson family, she founded Diana Gyms, a chain of women-only gyms, concentrating on self-defence and assertiveness training, in part marketing, – perhaps unwisely – to female immigrants and their daughters from cultures even more conservative than the southern United States.

When Kayla arrives, Zoe is entering the final year of her business and sports science studies at Asgard College. Zoe’s boundless energy, abrasive attitude, and extreme competitiveness have given the Asgard Valkyries a notoriety out of proportion to their league performances so far.

Being the final season in which she can play on the squad – and there are quite a few supporters and players who can hardly wait to see the back of her – she is determined that this is the year the team ascends to its full glory and senses in Kayla potential for realizing this goal.

Last but not least, I’ve started a Summer sale on my own site, which will last a week (so until next Friday, the 28th July). No need to enter any coupon, the discount will be automatic on checkout.

Browse the catalogue of games and make your choice!

This entry was posted in dating sims, volleyball heaven. Bookmark the permalink.