Lol I might keep this as a sort of easter egg. I'll think about it :D
Top 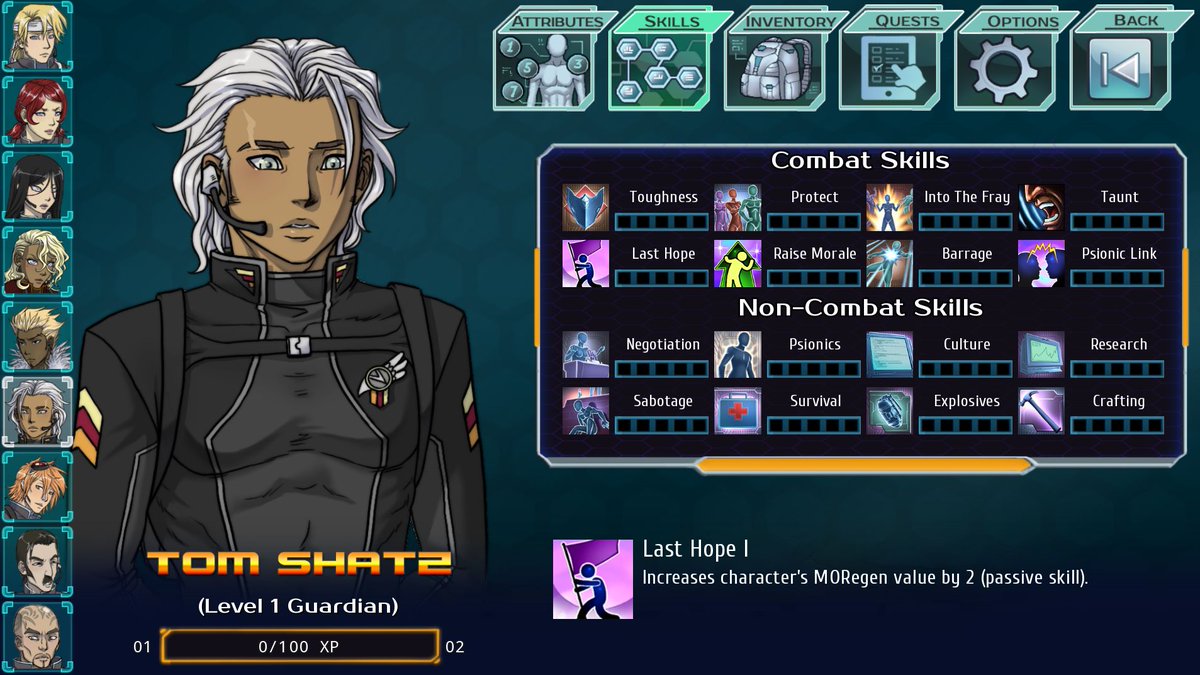 I now have all the skills icons! 77 in total of which 40 brand new (but probably I'll add more as I develop the game for the enemy skills).
As you can see Tom Shatz is the last hope of humanity

today got some art for the crafting part. I'm not going to reuse Amber's system since it's way too complex for my needs (also the resulting items aren't compatible with this framework

).
In practice you'll be able to use resources you collect in the map to craft randomized items (weapons, armors). I think should be fun

I know, I think I will have some fixed values while crafting though. In practice each item has a "key" value: for weapon is damage, for armor is defense.
Then the randomization will affect other stats (magazine size, speed, etc).
But if you craft a 50 dmg item, will be 50 dmg item. This way should reduce the save-scumming. Or if you have a better idea, I'm all ears

How many items are you planning to allow us to craft?

What some games do, and you might consider, is when crafting is secondary, the crafted items have fixed stats. So you just have to go out and collect the materials for whichever items you want. But they're also not the best items (because they're guaranteed). Maybe they're 80% as good as the best items, so you're encouraged to do other content for the best stuff but have a fallback if you have had poor luck or need some immediate upgrades.
Top

I don't know yet - I was planning to allow unlimited crafting as long as you had resources. Like:
for a weapon level 1 - 1 resource (of certain type)
and so on until level cap.
However, since now I know this framework very well, I could also not do crafting but use resources to make your existing items more powerful.
Or do both things if I really want to go nuts

I like your suggestion, even if (personally) I like when there's a bit of randomness involved. But depends on people's tastes I guess. On the other hand, since the looted items and the shop ones will be randomized like SOTW, I guess I could have fixed items for crafting, would probably make sense.
Top

Personally, I'd probably limit the amount of items that can be crafted, so you have to choose who to craft for, and what items you'd like to specialize in, but those items have legendary stats.
Top

Yes the main problem is that since the items have a level like SOTW, you could craft a level 10 legendary but that after you level up 3-4 times become obsolete (well not weak but not legendary anymore). This is a general problem with this kind of approach though (randomized items). The obvious solution would be to have those legendary weapons auto-level up as your character levels up, or as I mentioned before, the possibility to upgrade them still using resources.
As usual the best is to do some experiments and see how it works

jack1974 wrote: ↑
Sun Jun 03, 2018 7:07 pm
I like your suggestion, even if (personally) I like when there's a bit of randomness involved. But depends on people's tastes I guess. On the other hand, since the looted items and the shop ones will be randomized like SOTW, I guess I could have fixed items for crafting, would probably make sense.

It kinda depends on the setup, hence my original question on how big the crafting component is intended to be.

The random item stats thing works when resources are plentiful and easy to get with some time investment. WoW's crafted items have random secondary stats, so if I don't like my roll, I can go farm more. Though if it's too random, this gets really annoying because after the fifth junk craft in a row, people tend to give up on the system and assume it won't be worth the time investment.

You could take the alternative approach and offer super fixed stat weapons. Then have the materials to upgrade them drop (guaranteed drop) on certain key missions throughout the game. That way you know "before x point the player won't have this weapon". Could even be tied into the character side missions.

But if resources are scarce (and there have been a finite number of possible combat missions in most WW games), I'm not sure the random idea works so well. Then you're essentially encouraged to save scum until you get the best result, at which point, might as well give the player the best result to begin with. The mixed approach I initially talked about allows you to craft good weapons, but not the best. And the random part is potentially getting a better weapon from missions and combat.

The difference is random stats on crafted gear feels like a penalty ("wow, I wasted all those mats for that crappy item") whereas a random upgrade often feels like a bonus.
Top
Post Reply
130 posts