After two days if intense tweaking (to not be confused with twerking!

) I think I nailed it. I used calculator and numbers, and now your party does same damage/hp ratio at level 2 like at level 40 (the level cap) of course against the same enemies. In the game I'll randomize a bit the stats of course, but before it wasn't working like this.
Also I tweaked all the skills and reverted back to SOTW system with skills costing a lot of PP, so enemies could have PP Regen, and everything is more balanced.
The main difference for those coming from SOTW is the deteriorating defense, which will prevent battles to go too long in any case, solving probably the only issue of SOTW battle system, that were the battles too long.
Now I remove 10% of current defense every time you hit the target X times (depending on their Resilience values) and this way the defense drop is bigger early in the battle, but lower at the end so you can still turn the tides of a battles.
Yes I'm very pleased.
Now I'm looking forward to seeing some players demolish completely my ideas as always

jack1974 wrote: ↑
Fri Jan 18, 2019 12:37 pm
The main difference for those coming from SOTW is the deteriorating defense, which will prevent battles to go too long in any case, solving probably the only issue of SOTW battle system, that were the battles too long.

The other problem was too many trash battles, especially if you were unlucky in the coliseum. I think there were something like 425 battles including the expansion, and while the boss fights and cutscene ones were great, the trash encounters were repetitive.
Top

Actually I remember an user (fabula) who took time to play all the battles in Loren and compared to SOTW. In the end, surprisingly, the required battles in SOTW were more or less the same as Loren.
The automatic battles of PS2 will help under this aspect too though, you can pause the battle, use some skills (the AI won't use them) and then put back the auto-fight. I tried it a bit and it works and is also moderately fun. Not someting you can do often at higher difficulty levels, but it's possible if you have a party well equipped

I am coding this game in a different way though. There are game overs due to tough battles of course, but in general I'm using another approach:
- for Easy/Normal you probably won't need to do much grinding or complete side-quests
- for Hard/Nightmare, beside of course grinding and optimizing skills/equipment, there will be some timed side-quest (not all, but some are) that give good XP and money rewards.
So the difficulty won't be just "beat battle X against boss Y" but also "finish that sidequest in time by going in the right places in time". Hard to explain with words, once I put the beta out will be more clear

Today after fixing various critical bugs, I resumed writing some camp talk dialogues.
After this not much left to have the first chapter finished. I'm not sure if I'll make in time for end of month but shouldn't be much longer

And I'm at about 71k words for the script right now. Considering it's the first draft, unedited (usually editing they add some stuff so it's longer) and not even the full 1st chapter I think this game maybe won't be as long as Cursed Lands with its epic 300k-something words, but for sure over 220-230k words!
Top

Just sent to SilverHyena (who did a great editing job for Cursed Lands) the camp talk, while today/tomorrow I finish the first chapter main plot. Then, I'll have to write and code the rebel version, since obviously while the main plot has many common points there are also many variants and specific side-quest. This game probably would have been impossible for an external writer to write well, too many variants

I suspect the first chatper only will end close to 80-90k words. Definitely another... SMALL GAME! (tm)
Top 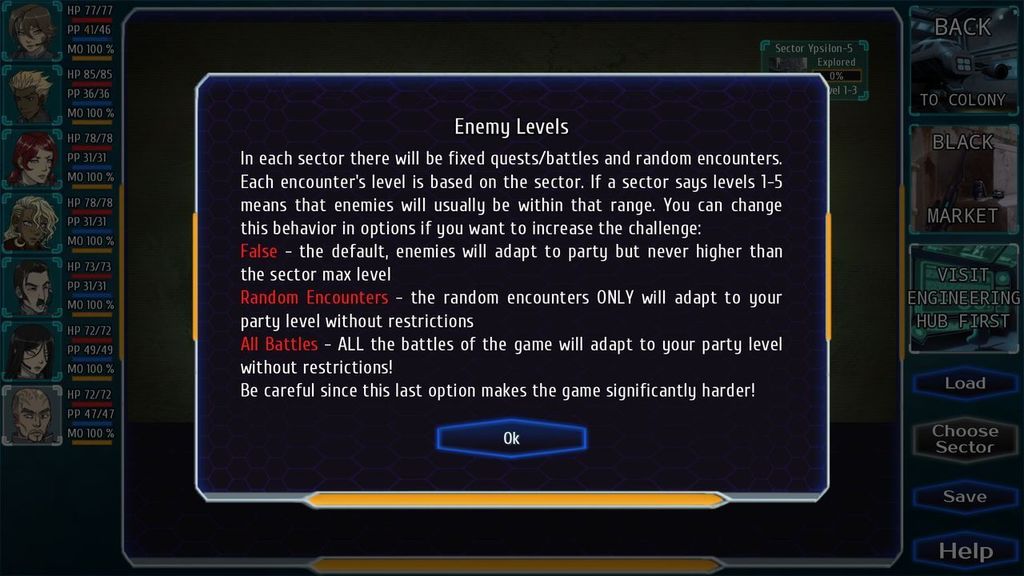 just added OPTIONAL level scaling. This should make everyone happy. Some people (like me lol) might like to go back to a level 3 encounter once you're level 5 and crush the enemies easily, while others might want to always have a challenge. The XP reward will change based on the difficulty, so there will be a reason in doing it too.
Top

I think you should name the setting "Dynamic Enemy Levels" and rename "False" to "Default". I know why you called it False, but that's coding lingo and is likely confusing to non-technical players.

I like Dynamic Enemy Levels wording I'll use that

and actually I didn't use "False" lol, I used Off in the menu! But when I wrote the help text I just read the variable value 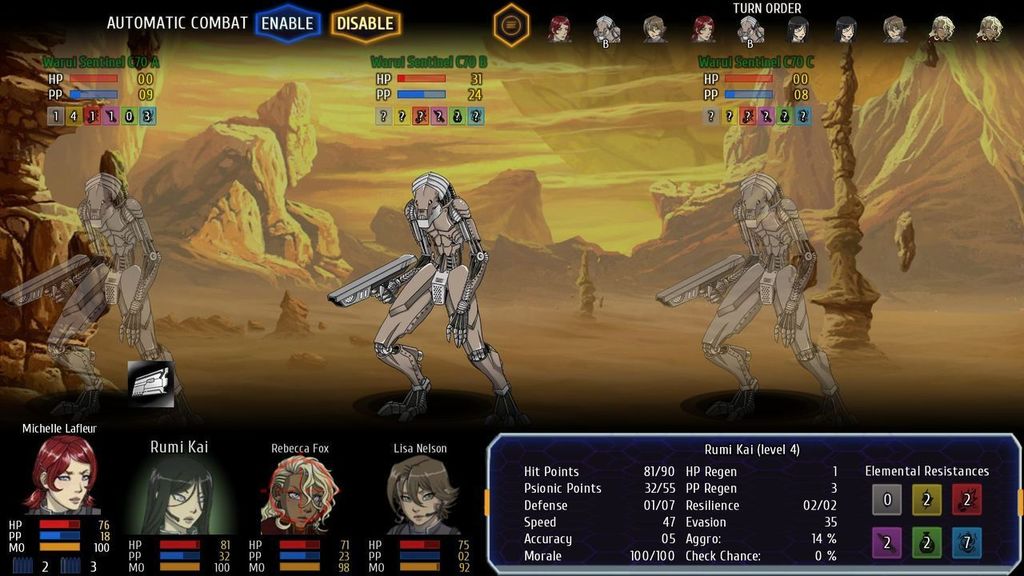 So I added back the HP/PP regen, basically as it was in SOTW, because while testing it was much more fun to play with regenerating stats than fixed bonus increases. Since there's the deteriorating armor/defense in this game, there won't be the risk of battles going too long as it was in SOTW 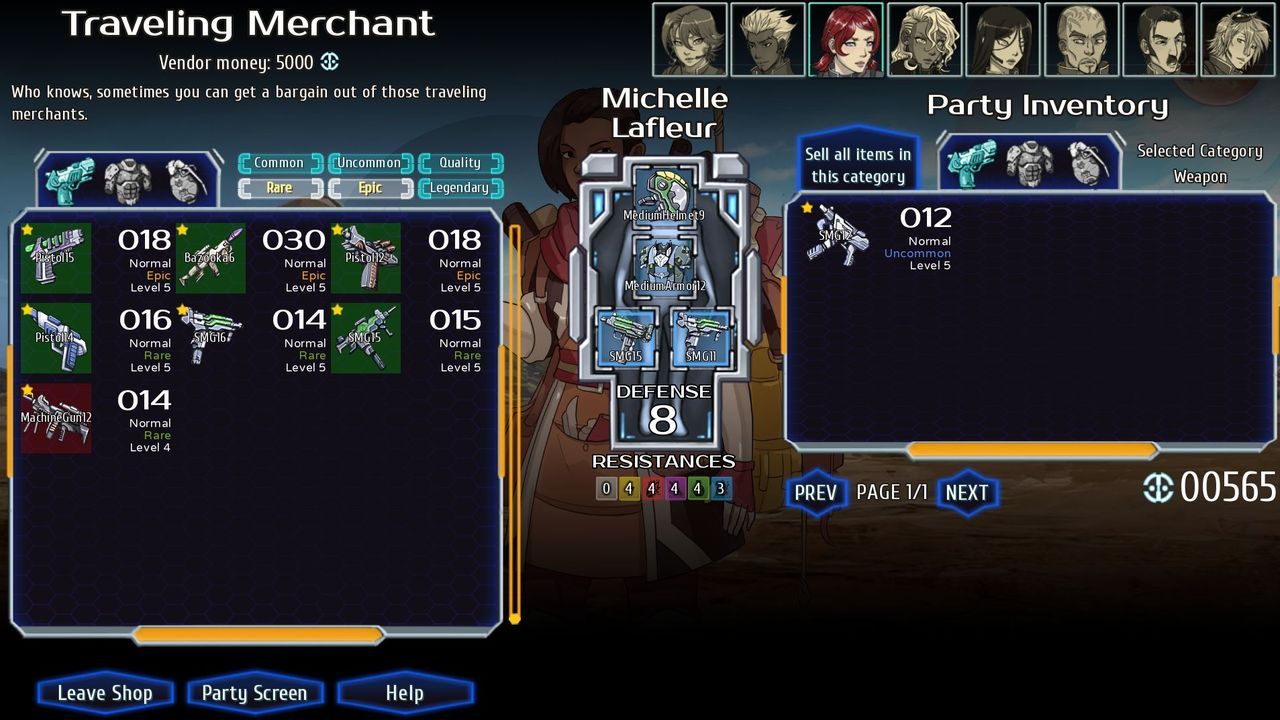 Since there are going to be many items I've added an option in the vendor to filter based on item rarity. I will add that to the player's inventory too