I had to open up PS1 to look at the armor stats there, since it's been a while. Yeah, it's going to be tough to show off five values in those tiny boxes, though a lot of it depends on how you intend to design the armor.

Something that's not clear from the latest screenshot - if I select an item in the shop, is there a detail panel somewhere that shows the specifics? Most of the time weapon damage and type is enough, but there are occasions where the other stats could be important when designing a certain build. For example, I think I optimized for a fast rate of fire on the old game because of the low % to hit/miss accuracy system. Maybe someone will figure something out around magazine size and reload too.

If the answer is yes, then you can just show an average defensive value along with the strongest element type and the player can look at the details section. If the answer is no (or it requires an obnoxious number of clicks), you might want to squeeze some more information onto there. Not just average defense, but also highest defense (value, so I can compare to my gear), and I think weakest element (since when planning gear I wouldn't want to accidentally give my units a vulnerability to a common damage type for the race I'm going to fight next).

One other quibble I had about PS1 was that eventually the "shop" would fill up with so much junk it made it hard to find the useful items. I'm talking about the 50+ low level medkits that kept spawning. I see in the shot above you have 27 pages (!) of gear to browse 9 at a time. It'd probably be more helpful to keep the items around the character's level, or maybe slightly below to provide just enough variety to look for elemental alternatives (for the one boss that has toxic vulnerability), but there's no need to show junk that all of the characters clearly outclass.

Finally, are you planning a gear augmentation system, sort of similar to Queen of Thieves? Not for every piece, but on a more minor scale, can I load toxic ammo or explosive rounds into my hand pistol to change the element type, or will I just need to buy multiple weapons for everyone and keep them up to date?
Top

Troyen wrote: ↑
Sat Dec 09, 2017 10:54 am
Something that's not clear from the latest screenshot - if I select an item in the shop, is there a detail panel somewhere that shows the specifics?

I only wanted to display more info in inventory because in other games like SOTW you had to manually click on each item just to know the attack/defense/etc.

Troyen wrote: ↑
Sat Dec 09, 2017 10:54 am
If the answer is yes, then you can just show an average defensive value along with the strongest element type and the player can look at the details section.

Yes I'm probably going to show an average of the defensive values, and if there's space (but should be OK) the highest value as you said.

Troyen wrote: ↑
Sat Dec 09, 2017 10:54 am
One other quibble I had about PS1 was that eventually the "shop" would fill up with so much junk it made it hard to find the useful items.

Haha don't worry that screenshot is a test I was doing, I autogenerated 100+ items to make sure the item randomizer was producing OK results

In the shop I plan to regularly clean it up and refill only with items around your party levels, like I do on my fantasy RPGs

Troyen wrote: ↑
Sat Dec 09, 2017 10:54 am
Finally, are you planning a gear augmentation system, sort of similar to Queen of Thieves? Not for every piece, but on a more minor scale, can I load toxic ammo or explosive rounds into my hand pistol to change the element type, or will I just need to buy multiple weapons for everyone and keep them up to date?

I'm not yet sure but I don't think so. My idea is to utilize the armor damaging system present already in Cursed Lands, so that the damage type and resistances have some importance, but aren't essential (maybe except Nightmare difficulty).

As you hit the target, he loses 1 point of armor every XYZ hit points lost (to be tweaked but once again works the same as Cursed Lands). Since in this game you can shoot/hit multiple times (I planned the burst to hit an enemy 5 times!) I could also lower the armor based on number of hits, or a mix.

Anyway, this means that even if an enemy has for example 50 explosive armor, if you attack with the same weapon above several times, the armor will slowly deteriorate and you should be able to inflict damage in the end. This is an extreme example since an enemy with 50 armor would be level 10 and the weapon above level 1. I think it's OK if you can't damage an enemy level 10 with a level 1 weapon! 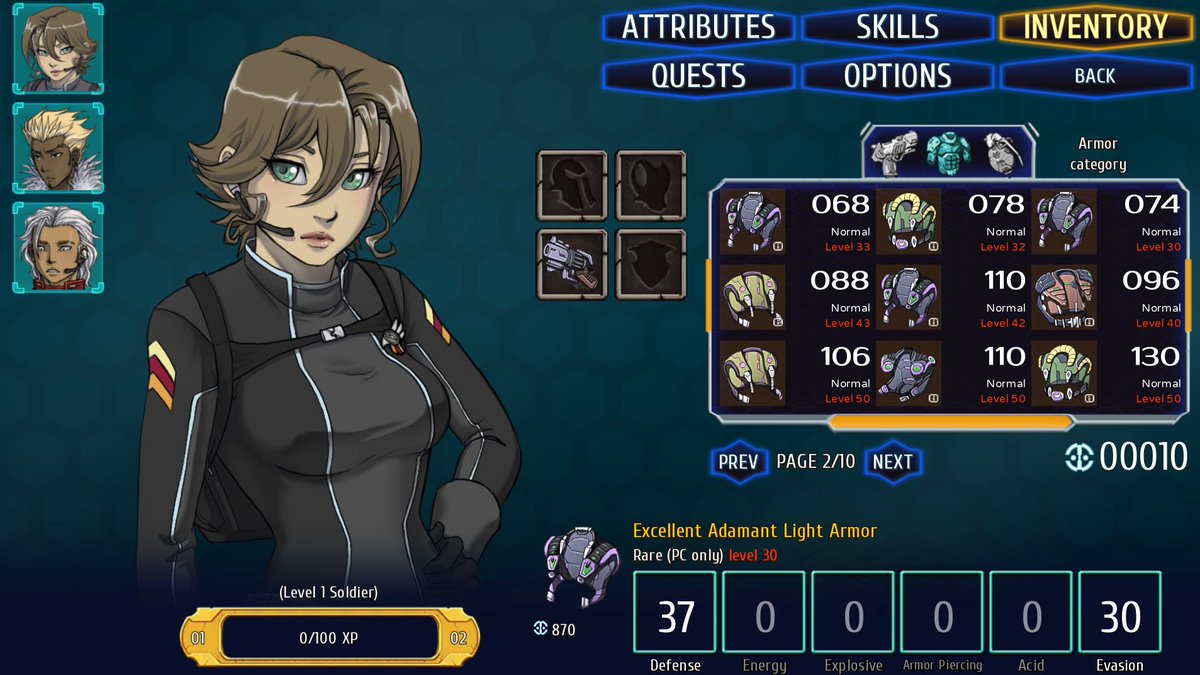 here's a screenshot with the detailed info at the bottom

That defense seems a lot, but this game will have bigger numbers, for example I checked a rare pistol of same level and had 98 damage so more than enough to do HP damage even if some will be absorbed. If I use a similar system for enemies it should work

The new damage/defense system sounds interesting. If I remember correctly there were armor-piercing weapons in the original. If you want to complicate things, you could have those be slower weapons (so no more than 2-3 shots even on the best gun) but have them reduce defense by an additional amount. That way there's a little bit more to it than set everyone to max burst. And maybe explosive could do a small amount of splash damage.

Yes those are interesting ideas

I have set the number of shots depending on weapon type, however I could have the AP weapons have a slower speed, which will mean they'll be slow overall, so it's possible to do it that way. In this game I don't want to go nuts with skills for each character but like the first one offer more customizations, so having different damage types have different effects could be interesting.

I ran some more tests on the armor random generation and results seems good: 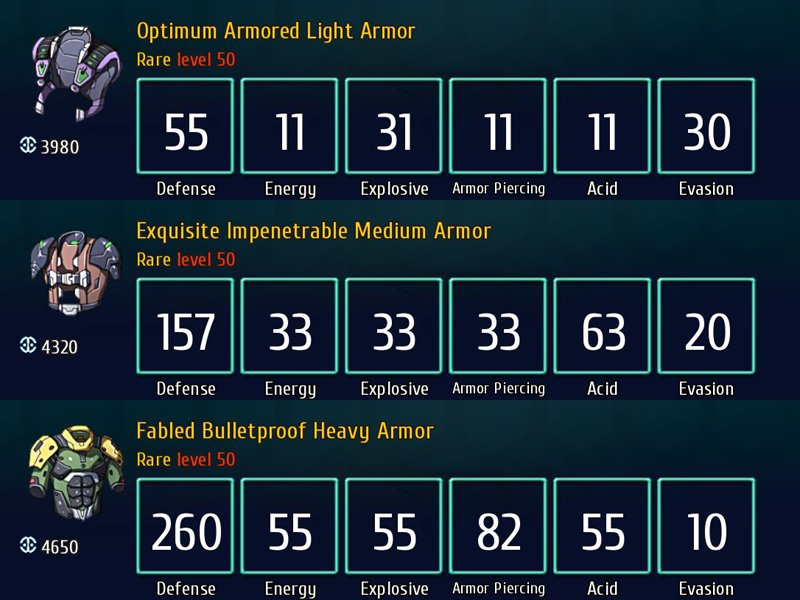 those are small numbers but as level goes up they scale so could be more significant (even 50 dmg of difference depending on armor / attack type).

With those rules will now try to do a test battle, though I'm still waiting for some missing icons like the helmet - like in Cursed Lands there is chest armor + helmet, which in this game will be the only armor to protect against Psionic. Makes sense since Psionic affects minds

Honestly, I'm a little wary about deteriorating defense. I remember you tried experimenting with it early on in Queen of Thieves. The first round, your characters take little to moderate damage, but suddenly suddenly wiped out the next round. I'm not sure how it's different in Cursed Lands, since I haven't got around to trying it out yet.
Top

In Cursed Lands is very different from QoT because in that game there was max 3 party members and much smaller numbers (less HP), I hope to make a demo in next days so you can see it. There are some skills that do damage, but enemies also lose 1 defense every time they take 10-15% of total HP damage (now I don't remember what value I put).
I am doing it to avoid the long-tedious battles of SOTW, where enemies could heal. Now even if an enemy can heal/resurrect, if their defense is low they still take more damage. In CL there are a few skills that also restore defense but are expensive. I think it has a nice balance right now, battles don't last too much but aren't too quick either. So I am hoping to reuse same system here

Does that only apply to enemies or do heroes lose defense too?
Top

To both (like Cursed Lands). It adds more strategy since you need to consider the defense value when healing or buffing (or even who to attack).
Top

I wonder if a system where armour gets it's own hitpoints would be easier. Basically you have two health meters, health and armour. Normally before health is damaged armour must be depleted. But armour hitpoints have a defence value, so they take less damage. Healing for armour would be separate and much harder to come by. It would be binary, either you're armoured or not. Which could be both good or bad.
Also it would allow some sneaky attacks that bypass armour and deal direct but lowish health damage, or conditions like poisoned(irradiated might be better for PS) that deal health damage over time.
RPG Programmer for Winterwolves, currently working on: Amber's Magic Shop
Part-time emotionless AI
Top
Post Reply
291 posts