Yes! As the title says, Cursed Lands, my new RPG, is finally out. The game official page is here: http://winterwolves.com/cursedlands.htm

Like my other games, even Cursed Lands will also be available for mobile and Steam: I only need a bit of time to optimize the game (whenever possible) for mobile, and to do the Steam setup (achievements, trading cards, etc). To be honest I also need a small break haha, but you can still expect mobile/Steam to be available shortly.

And now, I asked the game’s lead writer to write a “guest post”, so here it is. You’ll laugh like me reading the part about “a smaller game” 😀

Hey, I’m Justin Kuiper, lead writer on Cursed Lands. It’s been quite a journey, starting way back in 2015. Celso Riva was considering creating another game in the Aravorn fantasy setting, and I happened to have several ideas for a high fantasy story, including the concept for an “alignment” system based on the four temperaments and using social talents to avoid or escape combat. We decided that these ideas would be a good fit for a game in the Aravorn setting, and I began working on Cursed Lands, a story set before the events of Loren: The Amazon Princess.

I recently went back and read the initial email exchange, and noticed that one of his messages contained this sentence:

“I’d like this to be a smaller game (the others are huge, over 180k words of texts)”

I had to chuckle when reading this message with hindsight, because at over 300k words, Cursed Lands is the LONGEST Winter Wolves game to date! So much for this being a “smaller game,” a game that I originally expected to be done in under a year ended up taking three years to complete. That being said, I’m really glad that we took the time to include all of the story and content that got added, and despite the fact that this game is over 300k words, I don’t feel like there is any “filler:” everything that’s included in the game is there because it serves an important purpose to the story or the characters.

The story of Cursed Lands takes place across several lunar cycles, and the player is tasked with defeating undead that can only be confronted at night, with major story events coinciding with the full moon. The fact that the game’s major story events consist of investigating a castle and battling vampires and various ghouls gives the story a distinct gothic horror feel, but I’d say that Cursed Lands treats gothic horror more as an aesthetic than a genre. Cursed Lands is, at its core, a high fantasy story about traveling the continent and forming a group of allies to do battle against a powerful evil. The characters you recruit and the relationships that you form what I consider to be the real heart of Cursed Lands, whether that means romance or just forming bonds with your companions through conversation and shared experiences. Of course, there’s no better test of friendship than going on a vampire-slaying mission together.

One of the things we decided early on was that Cursed Lands would be a cast of mostly original characters. Karen and Apolimesho appear in the story (along with a cameo appearance by a young Princess Loren and a few other familiar faces along the way), but all of the party members are new original characters. This gave me a lot of freedom to write the story without having to worry about how the personalities and experiences of the characters would affect the Aravorn canon. For example, it wouldn’t make sense if a certain character had visited Castle N’Mar during the events of Cursed Lands, then later appeared in Loren: The Amazon Princess and had no memory of the events from the prequel; creating a new cast allowed us to avoid these potential issues, and also provided me with a lot of latitude in writing the game’s various endings. Having a fresh cast of characters also gave me a lot of freedom to come up with original backstories and personalities for each of the characters, which allowed me to try out lots of different ideas and give each cast member their own little quirks and unique traits.

At the same time, one of the fun parts of working on Cursed Lands was getting to familiarize myself with the lore of Aravorn. While the characters are new, many of the places you meet them are locations you might already be familiar with from other games in the Aravorn universe. You can travel to Hammerhands and do business with the dwarves, or go to the Great Forest and consort with the elves. Having an original cast of characters also made it possible to explore new facets of those areas, moving away from the populated areas of the Great Forest and traveling off the beaten path to discover where the outcasts live, and to explore some of the corrupt aristocrats that form the ruling class of Hammerhands. I think each of the game’s settings represents a mix of familiar and new, taking fresh ideas and enmeshing them with the rich lore of the series.

If you’ve never played a game set in Aravorn, welcome! I think you’ll find Cursed Lands to be a good entry point into the franchise. And if you’re a long-time fan of the series, I hope you enjoy this fresh take on the setting you already know and love. 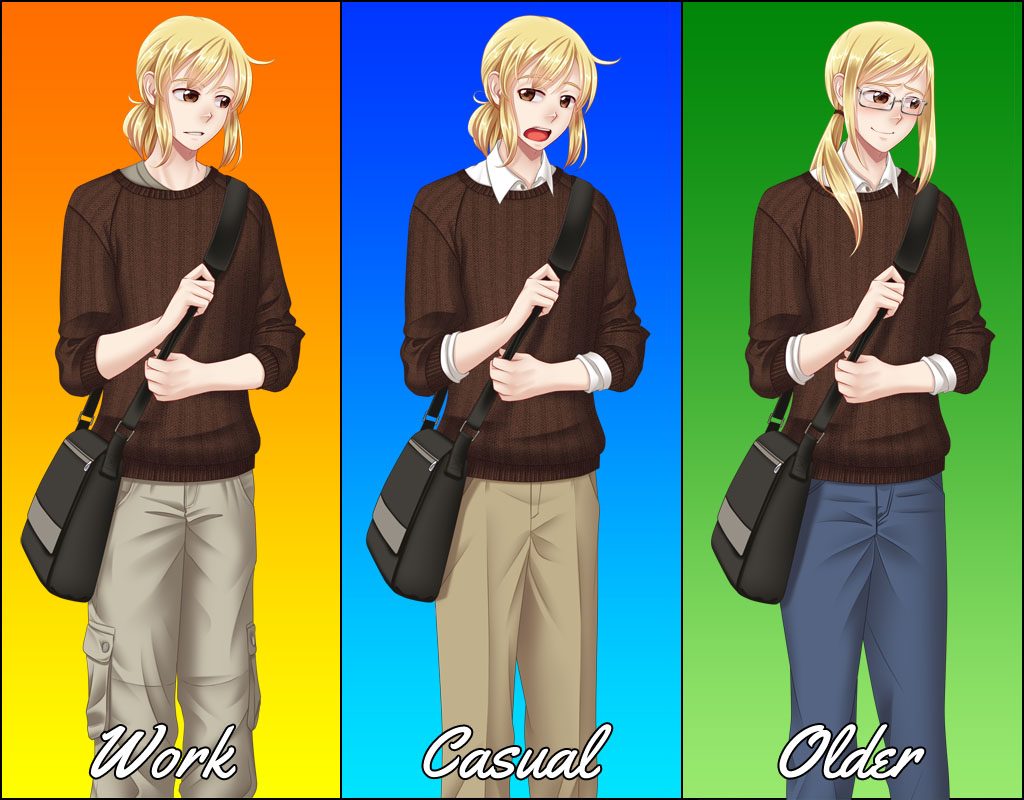 Noah originally started as a secodary character but then evolved into a proper otome romance 🙂 I’m sure that Jill looked at him and thought “aww the classic shy guy with glasses, should be a romance option”. Yes, I’m 100% sure that this is what happened! This is also the last character introduction for this game.

Lacey’s introverted and awkward twin brother. Unlike his sister, he is rather pessimistic and reserved. Sometimes it seems like there’s something amiss between the two, but it’s difficult to know for sure. He spends most of his free time inside writing and sketching in his notebook.

People following me on social media already know it, but just in case you missed it: Love Bites beta has started! More info in my forums: https://www.winterwolves.net/viewforum.php?f=47

As always the beta version might still have bugs, however in this case since it’s a dating sim, all the game content is ready. You can play and reach all the endings, unlock all achievements, etc! 🙂

Cursed Lands should also be officially released shortly, the theme song was made but I also wanted to do the video trailer and the person who usually does them couldn’t work, so I had to find a replacement and this added a bit of delay.

And regarding the next title I hope to finish this year, Volleyball Heaven, the romance CGs are being made right now (the lineart is basically ready but they need to be colored) and the game writer is doing a final review/polish of the story. Starting next month the scripting will begin, and as usual I’ll post screenshots during the development on twitter/tumblr so if you’re interested remember to follow me there.

Of course I’ll still keep working on Planet Stronghold 2 as well but honestly I expect to be able to release at best an alpha demo this year.

This week was my birthday, and I realized once again how lucky I am to be able to do what I do for a living. Thank to you all for your support!