I never set myself any special goals, because I know I don’t need any extra motivation…being able to survive is enough 😀

But this time I wanted to. In my plans, I want to release 4 new games next year! It’s a very ambitious goal, but I think I can make it. They’ll be all sort of adventure games but mixed with other genres. You already know about Spirited Heart, but recently I’m working hard also on another game: Bionic Heart!

Fun because until now I didn’t realize I used same word (heart) on both games! But they’re very different kind of game. Spirited Heart is more casual, and in general in a happy mood. With Bionic Heart instead, I’m hoping to recreate the dark, oppressive atmospheres of sci-fi classics like Blade Runner & Co. Not an easy task of course…! For now that’s all about this game, if you’re curious you can see the main menu image below… 🙂 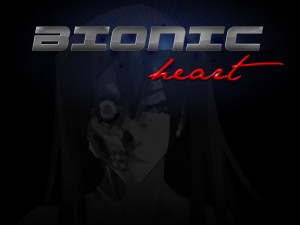 This kind of setting really intrigues me. I’m writing lots of texts and dialogues, I feel really inspired! Also, I’m not making a visual novel this time, but a sort of mix. You’ll have more freedom and choices, but the interface will still be simple and you won’t be stuck like in many traditional adventure games.

Yes, the indie game website Gametunnel, in its popular Indie Games Of The Year awards, included my Supernova 2: Spacewar into the top5 simulation games of the year. While I think my game is more a wargame or a strategy game than a simulation, I’m still proud of have it included among the bests indie games of this year, also looking at the tough competition.

On the development side, some good news: Spirited Heart is going very well, though I think I won’t include a combat sub-game in it (I’m still not sure about that). But the characte generation is done, and also the status screen with all the various game options: Work, Study/Train, Relax, Relationship and Check Status.

It will be a weird game I think. Similar to Cute Knight, but without the dungeon part, and with a slightly different gameplay mechanic. I am also thinking to ask Hanako’s programmer to license the use the dungeon-crawler engine he used in that game, so I finally could resume working on Tower Of Destiny, which is in hiatus-mode since 2005! :/

Anyway for now I’m concentrating on Spirited Heart and 3 more “mysterious games” that will be released during next year. I don’t want to disclose too much, but each game can be described with a word: Poker, Robot and Flower.

Today I finished the character generator for Spirited Heart, my upcoming hybrid adventure/RPG. To be more specific, I should say is a mix with make your own adventure gamebook and a RPG/Life simulation. There are stats, and there is a daily schedule. There will be various jobs, and you’ll be able to attend some specific school courses to improve some of your stats. 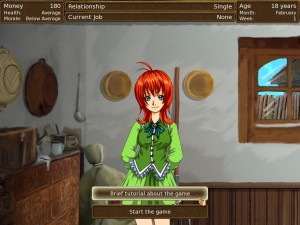 Then, from time to time, there will be random events. Lots of them, which changes based on your race/job, quite a big combination! Differently from the character generation, you’ll still have some options to choose, but some of them will be disabled if you don’t match some specific skill checks.

On the right you can see the actual status screen of the game. From there you’ll be able to select what to do, and you’ll also see the various statistics/skills.

As for game length, I was thinking something like 10 years, from 18 to 28, or maybe even less: since you play every week, each year there are 52 turns, so ten years would be 520 turns, maybe too long!

For those interested I uploaded a very rough alpha version here: