First of all, Happy Thanksgiving! I am running a sale until the 1st December included, all my released titles 50% off: www.winterwolves.com

Discount is automatic, and displayed on the shopping cart. 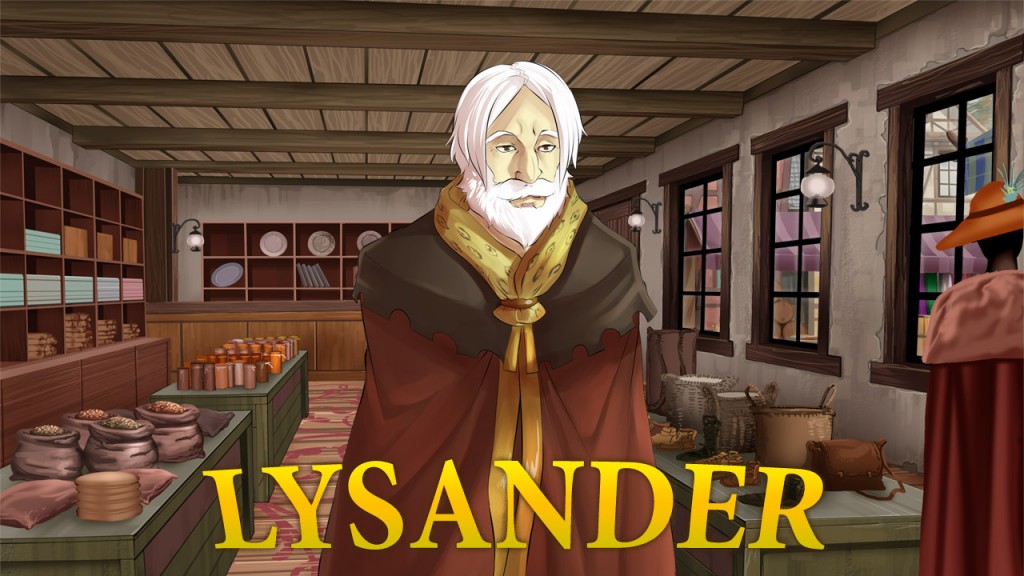 Now that we have seen all the main characters, time to take a look also at the secondary (but not less important) ones. Let’s start with Arianna’s husband and father of the three sisters:

Lysander was the son of a reasonably well off farmer. He grew up strong and joined the town guards as soon as he could, desperate to be more than a farmer. It was while in town that he first set eyes upon Arianna while she was walking about town with a young Raul Capello. He was instantly attracted to her and started to find excuses to meet her as he patrolled the town.

Eventually he succeeded in winning her affections and they were married. They moved to a village a day’s journey from their old home to start a new life. He became the village’s militia captain while his wife became one of the village elders thanks to her myriad of talents.

Life was good until his wife was taken away and he was left with three daughters to take care of on his own. Injury robbed him of much of the feeling in his right arm and that made things an even greater struggle for him. Gone was much of his strength and almost all of his happiness. He became a lonely obstinate man obsessed with avenging his wife but at the same time trying to do his best to be a father to his children. Many mistakes were made on his dual path but he always tried his best despite his many afflictions. The struggle has caused him to age prematurely and many assume he is much older than he actually is.

Recently he has a spring in his step that had not been seen for some time. Most assume it is the return of his daughters that has enlivened him which is partially true but not the whole story.

I’m working hard on the next update which will allow you to play until mission 15 (halfway through the main plot). I hope to have it done this weekend, though is taking more since I have also decided to add all the NPC sidemissions: optional side missions with a small scene for each NPC, which you can access from the map screen during the plot breaks.

Also I found out I put the team talk scenes in a wrong order, so I need also to fix that. Probably means the old savegames won’t work, sorry about that! 🙂 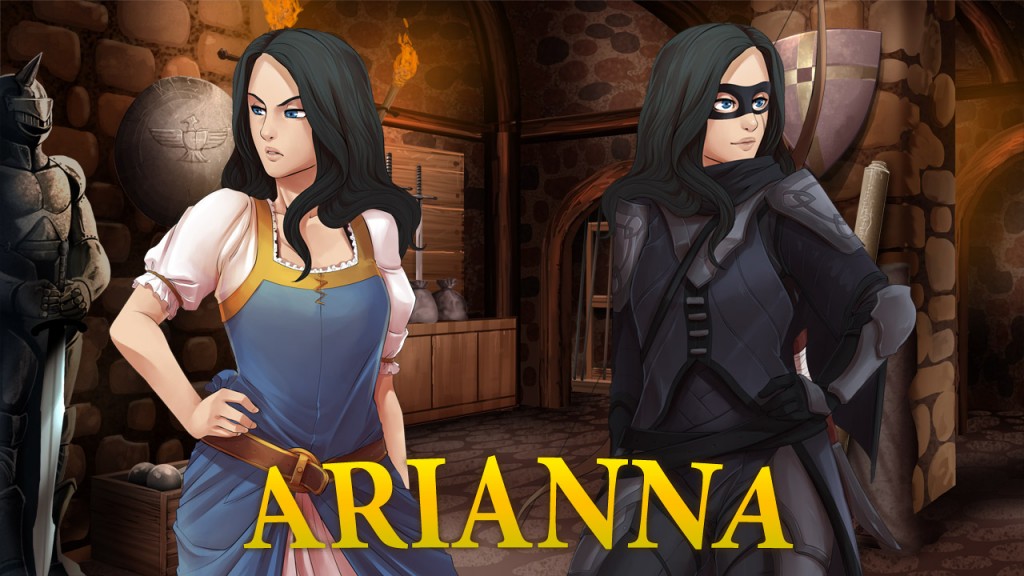 We’ve seen all the main characters and the male/female love interests in previous posts. But there are some more important characters to discover. First of all, the one who actually gives the name to the game:

Daughter of a very successful merchant, Arianna was popular with both nobles and commoners alike. She was often seen in the company of all kinds and no one thought badly of her for it. Most famously, she was fought over by a young Raul Capello and Lysander Spiros. In the end, Lysander prevailed and Raul never forgave him for it. Arianna herself felt great affection for both of them, and likely loved both of them too, but there was something dangerous about Raul that made her decide it was better to spend her life with the poorer Lysander than live a life of luxury with the Capello family.

Arianna is a very strong willed woman with a big heart who finds it difficult to say no to people. It was perhaps why she took so long over her decision on who to marry which led to the grudge that developed between Raul and Lysander. Despite that, she still believes in doing what is right even if that means hurting those she cares for. A quality that came to the fore when Raul took over as the new Lord after his father died. He was a tyrannical ruler and Arianna found she could not turn a blind eye to the suffering as others. She took up the name of the Queen of Thieves and set about doing her best to righting the wrongs inflicted by the man she loved.

Being the Queen of Thieves came easy to her, she had been blessed with great strength, agility, intelligence as well as the gift of magic. Some wondered if she was actually the daughter of normal humans thanks to her amazing abilities. Whatever the case, she never sought to use her blessings for herself and always in the service of others. In the end, however, it was not enough and she vanished twenty years ago never to be seen again, her works left unfinished and the people still suffering under the rule of Lord Raul Capello.

I’ve finally managed to release a beta demo. Please note, that the game length is still the demo length (the first 10 missions/scenes) and like in the past, I plan to continue coding the story on each update. So next big update will have up to mission 15, then 20, etc until I reach the full game length 🙂 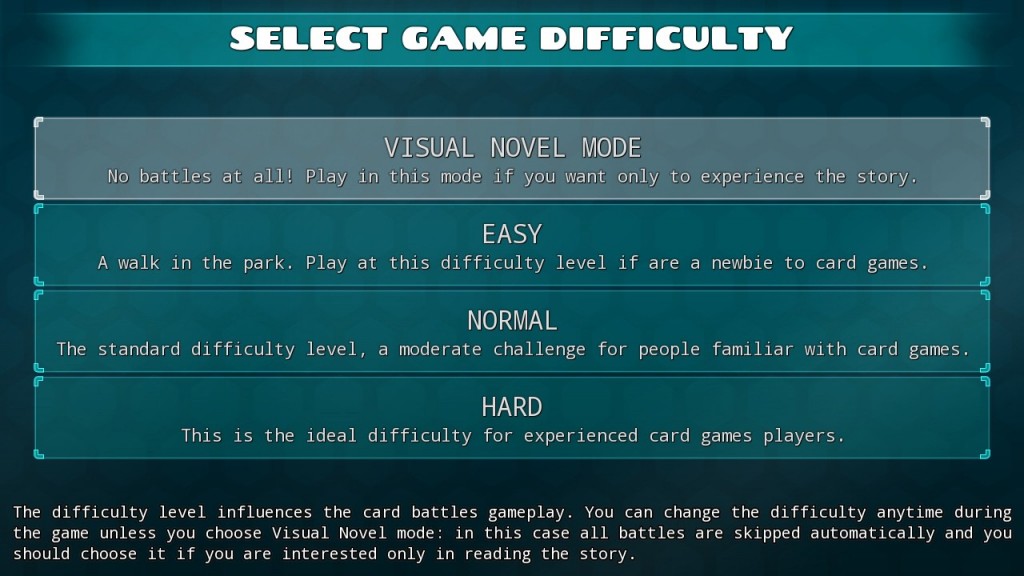 For those who play my games most for the story, there’s a nice surprise: I have added a “visual novel mode”, so you can play the game only as a visual novel if you want. I’ve learned from SOTW that a good amount of people would have liked to read the story, but either don’t like the gameplay, or simply not have time (that would be me…) to play all the battles.

So I thought, why not make everyone happy? Like I’m doing with the romance options, trying to have something for all tastes, whenever I can will try to do the same also for gameplay. In this case, if you choose VN Mode you won’t see a single battle, or deck building screen. Since the game story is quite long (over 200k words!!) and has several interesting romances, it was a pity not let everyone enjoy it. 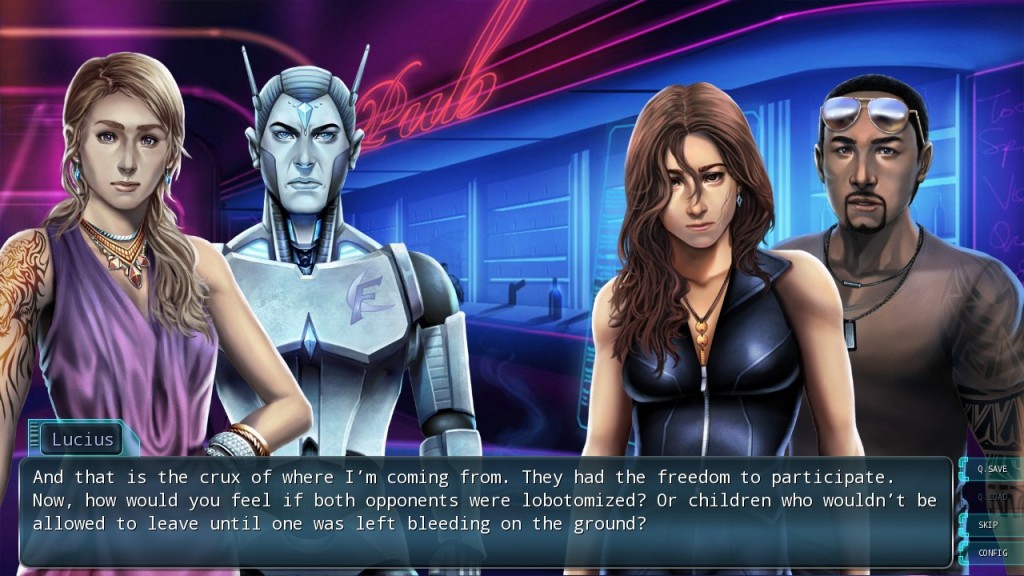 In particular, the otome romance of Diana with Lucius the robot is something really unique, and both funny and touching at same time. I honestly think the story is worth reading just for that (but there are also many other interesting romances of course!).

The game official page is http://winterwolves.com/pscd.htm 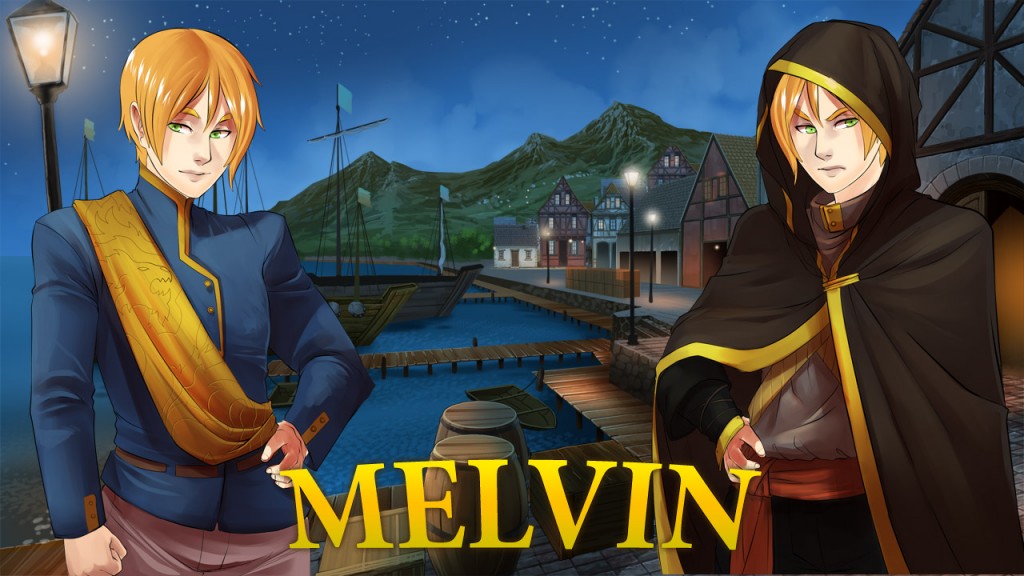 Today we’re talking about the last male romanceable character of the game, the mysterious Melvin. Here’s how the writer introduces him:

Very few people in Ahkra really know Melvin. He is the scion of a long-standing noble family although rumours persist that he is the last of his line, and his estate is essentially empty except for him. His family fell out of favour with Lord Raul due to issues dating back to Melvin’s childhood, and it appears Raul has little interest in burying the hatchet. Mostly, he is seen visiting various business in the city, and buying all sorts of strange items that may no logical sense when put together. No one quite knows what he is up to although there are many who are curious.

Those few who have interacted with Melvin find him rather charming albeit somewhat vain. He tends to agree with any compliments given to him and has gained quite a reputation as a womaniser. Many do fall for his good looks and charming words, thinking they have won the heart of a noble, but all have ended up disappointed when he vanishes after a night of passion.

If you follow me on twitter or read my forums, you know that last weekend I was able to put up an alpha preview version of the game. Since then, this week I am working hard to finish the beta version of the first 10 missions (which will also be the final demo length of the game) for this weekend.

I am at good point, but I spent a bit of time to add some polishing (the basic battle attack animations) and a detailed tutorial on the first battle which should let players who aren’t familiar with such games to understand the basics mechanics.

I am unsure if I’ll manage to finish the demo for Sunday, but of course I’ll try. As always check my twitter or forums for more up to date news! Enjoy some screenshots of the game various features below: 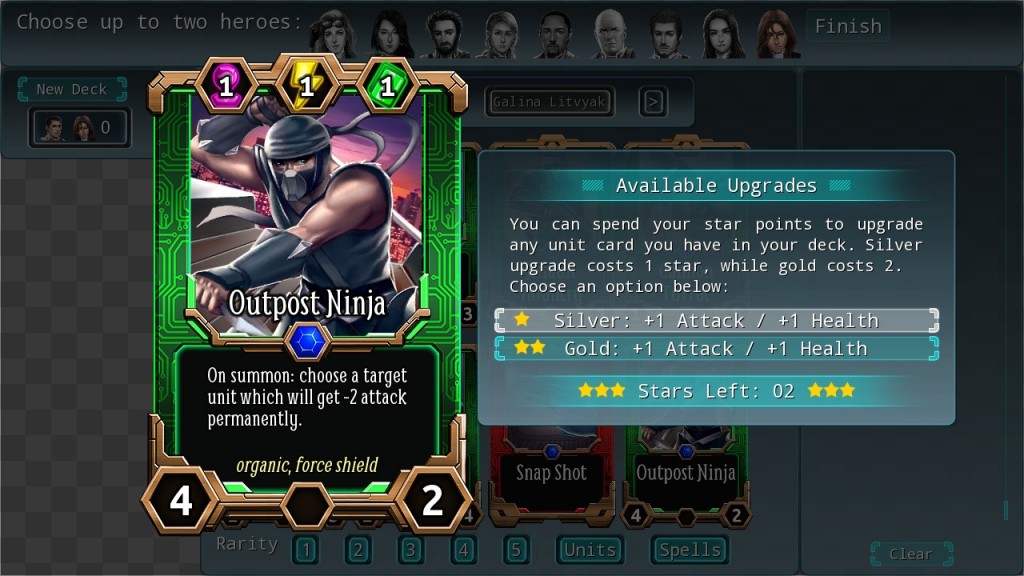 In the deck screen, you can upgrade any card to silver or gold status, increasing its stats 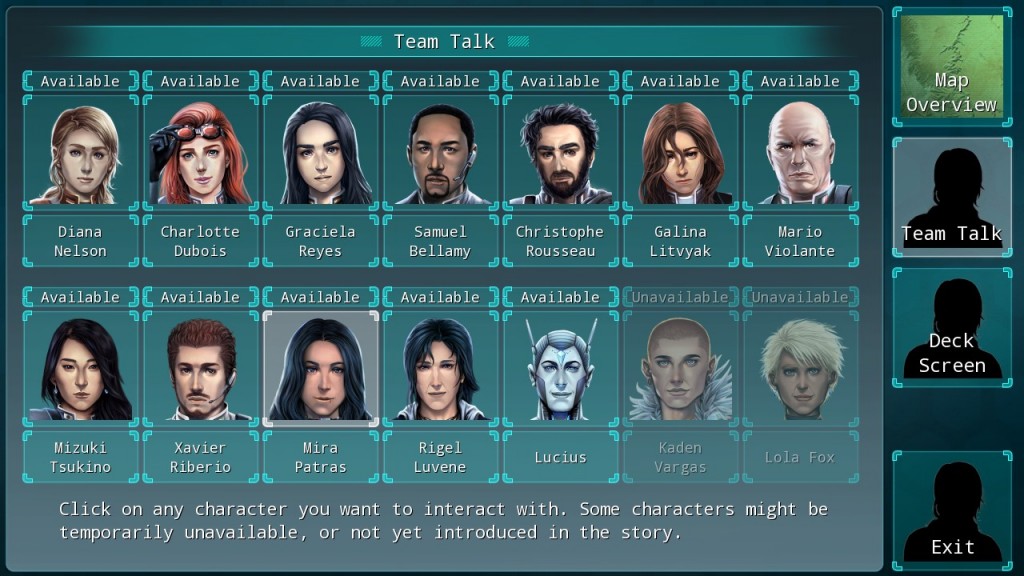 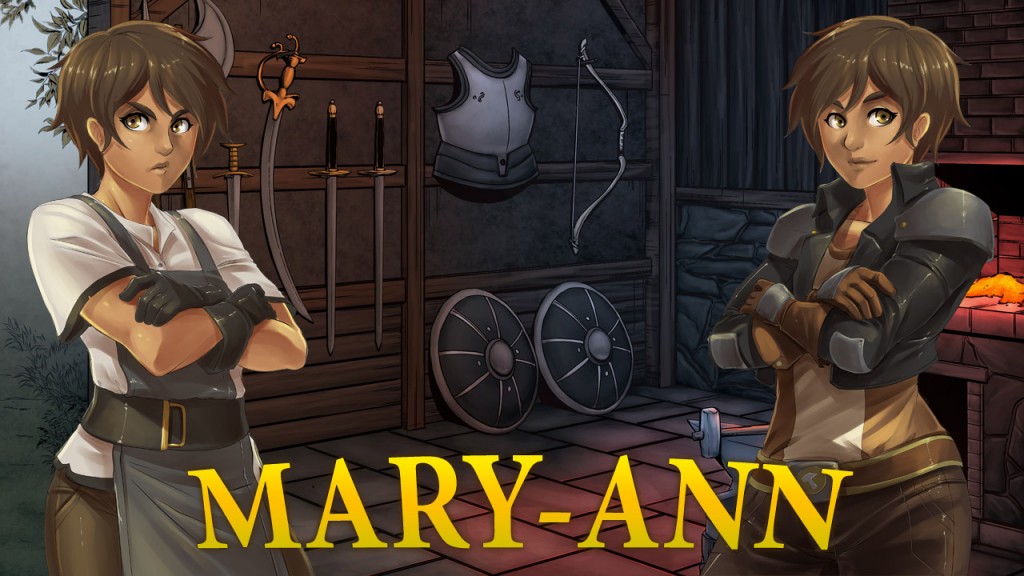 As you know, I like strong female characters in my games. Mary-Ann surely fits the description completely! Below the official intro by the writer.

When Mary-Ann was an infant, her grandparents and parents left the Broken Lands to settle in Ahkra. Her grandfather started a forge in service to Lord Raul’s father and soon her family began to prosper. That ended shortly after Raul came to power. Her grandfather had died by then and Raul had little interest in the services of Mary-Ann’s father. They were cast out of his castle and were left to man a forge in the city. Gone was the creation of unique weapons and armour, replaced by horseshoes and other simple things that any competent blacksmith could make.

Shortly before turning eighteen, Mary-Ann’s parents died and she found herself alone. She decided to take over the family forge and has served as the town blacksmith ever since. Mary-Ann is extremely gregarious and very good at her job also. She is very popular in Ahkra and she often likes to take advantage of that. Deep down, she yearns to do more than what she does now: however she understands that she cannot abandon her family’s legacy.

Mary-Ann is infamous for her sexual appetites and has had a string of female lovers. It is well known she has little interest in serious relationships but most of her former lovers say that blacksmithing is only one of her considerable talents… 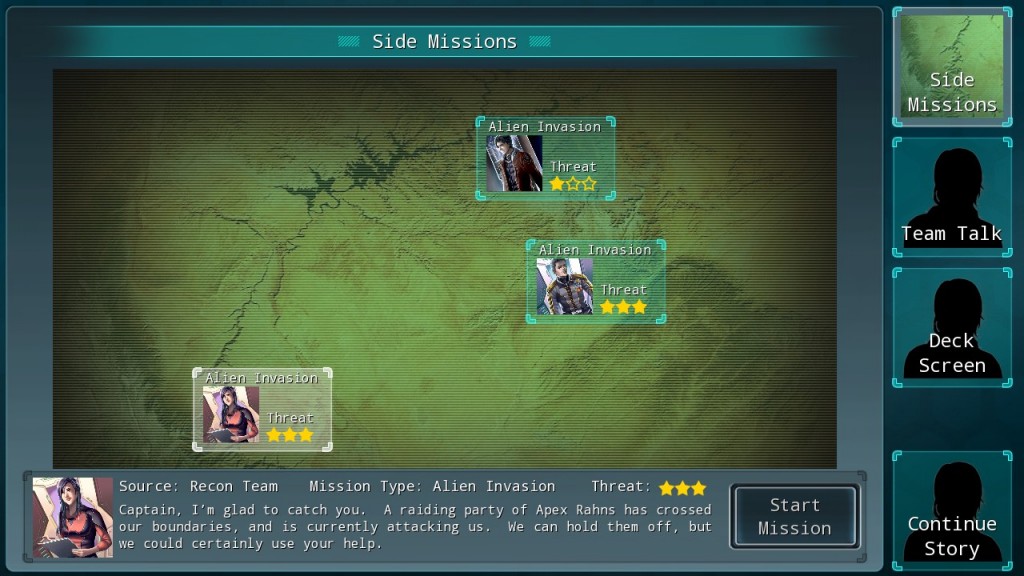 I sent a newsletter last week, offering the possibility to preorder PSCD. The game temporary webpage can be found here: http://winterwolves.com/pscd.htm

My plan was to release a beta demo at mid-November: however things have been going very well, so I think I might be able to release either a shorter demo this weekend, or the beta demo early next week.

Beta demo doesn’t mean the full game, since I am still missing some GUI art, and I also need to code the advanced missions and test/tweak.

I don’t plan to release the game this year, especially considering how crowded it seems to be (both other indies and AAA companies are releasing a lot of games in the next weeks!) but I will probably complete the full beta version before end of year. Which means you could play the whole game in beta in a few weeks from now 🙂