Who wouldn’t like to? Stop playing the Sims and enjoy a fantasy life with Spirited Heart!

Ahem, sorry about the ad. I wanted to talk about the spin-off of my fantasy life simulation game which I released last year. First of all, I’m still in the early stages so is hard to tell when it will be finished. Previously I said maybe for Christmas but at this point I doubt it, since I want also finish Planet Stronghold first.

I can reveal a bit more info about the game itself. While Spirited Heart was set in the imaginary town of Triberg, and the whole game took place there, in this spin-off there will be already a major difference: you’ll be able to relocate in any town of a whole region. Have yet to decide how many towns there will be, but is very likely the amount will be around 20 or so.

This choice won’t be purely to provide more content, but will greatly influence the whole game, for example:

About the last point, I already explained how this game will take advantage of the online feature. The game on each run will auto-update itself, to provide the user with the latest version available. At same time will notify of new features like new towns, quests or items. That is my goal for this game, to start moving finally to the new era of online games. So, except for last minute technical difficulties, the game will be online only (a big step for me, but I feel is necessary for this kind of game).

As you can see from the thumbnail on the side, I’m also investing lot of money on assets to produce a game with great art. I really believe this will turn out to be one of my most beautiful games 🙂

The title and everything in that picture is just a mockup, so definitely a Work-In-Progress! But I think it already shows off the kind of art you can expect in the full game.

That’s it for now, I’m really eager to begin working on this game, but since is probably my most ambitious game ever, I’ll take it easy and cure it in every small details!

I’ll start this post with a quote from Jeff Vogel’s blog (he is the man behind Spiderweb software):

“One of the worst things about what I do for a living is that hardly anyone else does it. You might think that not having competitors is a good thing. It is not. In the game industry, competitors help as well as hurt you. When EA spends millions of dollars advertising Dragon Age and Mass Effect, they aren’t just pushing their games. They are also advertising the whole idea of playing RPGs. Dragon Age makes as many potential customers for me as it takes.”

I really can’t agree more with this – but under the “niche games” perspective. We all know what happened to the casual market. First, Bejeweled and Zuma. Then in a few years, 150.000 clones of those games: then the rise of Hidden Object games, and lastly, the pricewars. That had several DANGEROUS side effect (for us game developers):

What is my take about competition? It’s good, I like it, as long as I can sell as affiliate 😀

Jokes apart, as long as are product made with heart, passion, and not simple clones made quickly to make some fast money, they’re all welcome. For example, I recently played a great game by Sakevisual called Jisei. Is really very well done, and beside the fact that I know the author and the artist well, I honestly think is a good product. It was fun when was released because I was still working on my game Vera Blanc since December 2009: so seeing such a quality game that was started just a few months (I think May) already out BEFORE mine, obviously made me thinking “What, how is possible!?” 😀

But like Jeff says, it’s good, and also I think that we indie devs should help each other (that’s why I often promote games as affiliate to my huge mailing list and other devs to the same with my games). Maybe people playing Jisei will find out about my other detective/supernatural game Vera Blanc (when it will be out, hopefully soon!!), and vice versa, maybe people playing Vera Blanc will also find out about Jisei and love it. 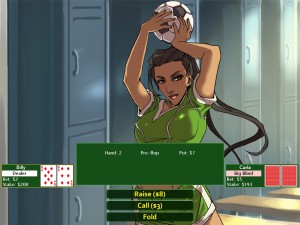 My latest game, Card Sweethearts, is out. So I thought to make a post about the making of it, including some interesting informations for developers about a hard DRM decision I had to take.

As you might imagine taking a look at the screenshot on the right, the game is about poker. In some parts, you can even play strip poker with one of the four women you’ll encounter during the game. The game features beautiful manga art from Rebecca Gunter (don’t bother contacting her, she is full of work until next year!) and uses a custom version of the Ren’Py card-game engine that the programmer Tom made specifically for this game.

The project started a long time ago, so long that I had to look in my emails archive to find out when first I asked Tom if he would like to collaborate with me for this game. It was september 2008! The poker engine took quite some time to make (it’s more complex than you might think, especially the Poker AI of the CPU players) so around the summer of 2009 I had a finished alpha version of the poker engine, all the art for the game and a general plot idea in my mind.

At those times I had released already some other visual novels/dating sims like Bionic Heart. The problem for me in making those games was (actually it still is) the language: since I wanted this game to be humorous, I had lots of difficulties in writing it in english because isn’t my native language. So I hired a person I found on Deviantart to write the game texts.

Sadly, that person quit in middle of the story in autumn 2009: so I was in a very bad situation, with almost everything ready except the story. Once again, I asked my precious collaborator Ayu Sakata (which at those times was proofreading Heileen 2, and started writing The Flower Shop) if she could finish the story. I really can’t blame her for not being too enthusiast about this (even if she never said that, I’m sure she was!), being a poker game with a male protagonist trying to date the girls, and end up playing strip poker with them 🙂

But anyway, she did a great job as always and in April/May we had the final beta version. Now comes the interesting part for developers: the DRM!

Why we decided to drop the DRM

As you can imagine, such a game would be very popular among the warez sites (manga, strip poker, etc) much more than my other regular games. Tom even came up with a neat online activation system, that was using a private/public key (similar to what OpenPGP does for emails) so that the product, once activated on a computer, was tied to its hardware. The user would have been able to “deactivate” the game from a computer to reinstall it to another, but still, was unable to play for example at same time on his home pc and on his notebook.

After some weeks of testing and feedback from friends, developers friends and normal testers, we decided to take the risk and drop it. Why? Well, for several reasons:

So, we released the game using absolutlely No-DRM system. Just a download link to get the fullversion, like we always did.

I don’t know if the game has been already cracked or not (it’s out since just yesterday) but I have the feeling (and the hope!) I made the right choice. The choice of rewarding people who buy games, not punish them with absurd DRM requirements.

I can officially announce that the original team (me, Ayu Sakata and M.Beatriz Garcia) started working on a spin-off of The Flower Shop 🙂

I call it spin-off and not sequel because, even if you’ll re-encounter several characters from the first episode (Uncle Sam, Clara, Marian, and so on) the point of view, the minigames and several other aspects will be completely changed. The first major change is the point of view or perspective: you’ll play as Natalie, a cute young girl which you see sketched on the left of this post by Deji (Garcia nickname).

As you might have noticed from the kind of clothes she is wearing, is definitely NOT summer anymore: it’s cold, it’s winter! The game indeed takes place at end of autumn/beginning of winter (we’re still planning the story so that’s why I’m so approximate) and will see Natalie helping Susana in the flower shop. So the farming-sim of the first game will become a “flower raising sim”, but there are other minigames and metagames that will be present. And they’ll be perfectly integrated with the story! This means that you’ll be able to spend the money you’ll earn in a very interesting way (I don’t want to announce it yet but is really a neat idea) and it will definitely affect more the endings than reaching a minimum earning thresold like was in The Flower Shop.

The game will be called “The Flower Shop: Winter in Fairbrook” (working title, subject to a possible change) and of course, being a spin-off, it means that it’s a completely stand-alone game: those who played the Flower Shop will be pleased to see again some characters and “familiar places”, but the new players will be able to experience the game completely even if they haven’t seen/played the first one.

I can speak for all the team saying that we’re very excited to work on this game, which should be out soon, probably after the summer!