I’m very proud to announce that the BETA version 1.0.3 of Supernova 2 is ready to be tested 🙂 I tested it myself for some days and seems to work fine, but as always, I prefer to be sure before releasing it officially… so if you have already bought the game, you can start playing with the ship customization, or check the new statistics screens, or play in the brand new Skirmish Mode (full speed into battles!).

If you haven’t bought it yet… what are you waiting for !? try the new, longer demo, that will let you try the game for more time than before, with less limitations.

I’ve recently published a game made in collaboration with Hanako Games, called “Summer Session”. It is quite different from my “usual” games, but I was always open-minded and willing to experiment, so when I found a very good manga artist (Rebecca Gunter) and a great writer (the girl who runs Hanako website), I decided to give it a try. It is of the genre of “dating sim”, a sort of adventure game in which you have to try to date out other girls, everything presented in a fun way.

When I played the first alpha, I was already excited because the game was exactly has I had in mind: a fun, relaxing game, with multiple endings so that you could replay it several times, and a small “simulation” part in it (when you have to decide your weekly schedule).

You can download the game for Mac and Pc (a Linux version is also available and will put online soon) in the adventure games section of my site Tycoon Games. Below a few screenshots of the game itself: 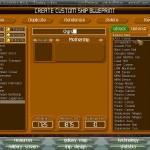 I’m getting excited… I’m programming in these days the Custom Ship screen of Supernova 2, and it’s going to rule 😀

I’ve changed so much in this last update (still in the works) that the game seems almost another game! or better, can still be played like before, but if you enable both Real-Time Turns in management part and the Skirmish Mode, it feels and plays like a completely different game!

Unfortunately I won’t have the time to put the Global Random Events into the next 1.0.3 release yet… but I hope you’ll understand: as it is, is already the biggest update I’ve ever done for any of my games in terms of change of gameplay, new features and enhanced playability (the only other big update I can compare with was when I added the Quest Mode for Magic Stones).

I was very motivated because I got some very bad reviews from people that compared S2 to the classic famous 4X games… the problem is that Supernova 2 is NOT, and NEVER WAS, an attempt to surpass giants like Galciv2 and such. It is a wargame, a classic wargame with good (I hope) rules and units, with a more deep simulation behind it than the usual ones.

Anyway, a pity they reviewed my game in version 1.0.2. I’m sure if they would play the new update that I’ll release probably next week, they would change their mind…yes, I’ve changed also the click sound and the main menu music! 😀