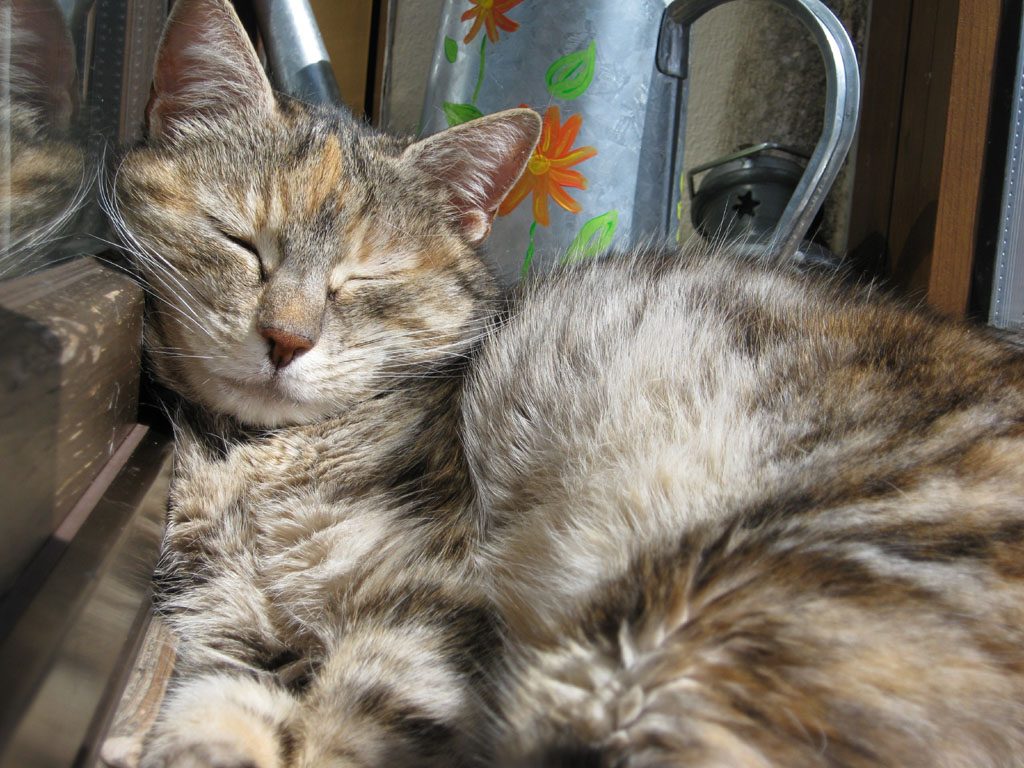 My cat Lilly seems to enjoy this warm Spring

Just a short blog post to announce that I’m doing a Spring sale, from now until the end of the month included.

No need to enter any code, the discount will be automatically applied on checkout.

Yep! Even this year I’m running a Christmas sale! It will last until the end of the year. Below are the details!

For all games released before this year, 50% off! The list includes:

For all games released this year, 20% off. Only exception is Never Forget Me, since it was released only a month ago! Sorry but wouldn’t be fair versus people who bought it at full price.

That’s it! Will make my last blog post of the year the 23rd, but let me wish you happy holidays already! 🙂 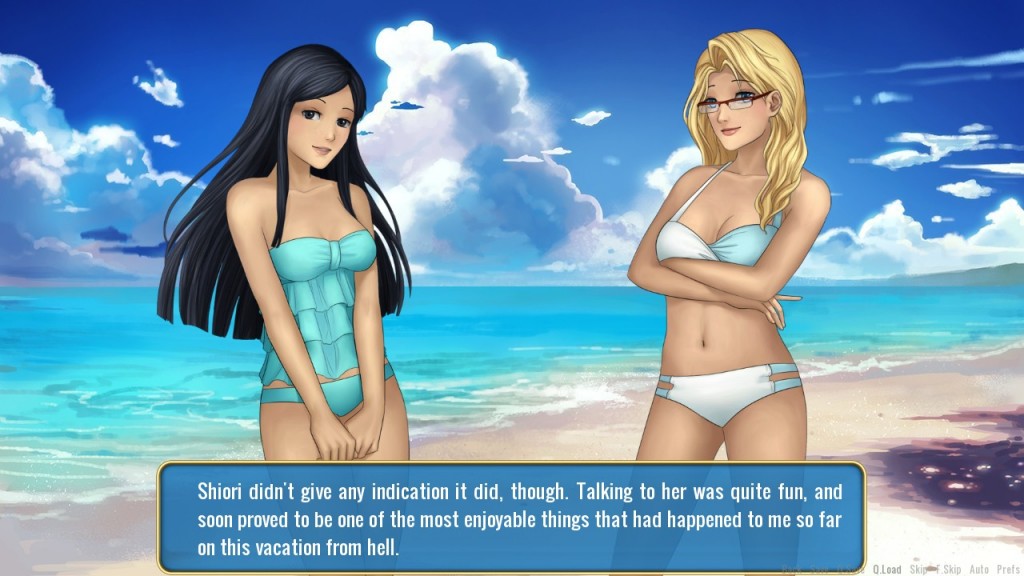 Happy Easter to everyone! To celebrate it, I am doing a small sale:

You can get a 20% discount until Monday (included) for all my games using the coupon: EGG during checkout. The discount applies even on SOTW, though not the DLC obviously since it’s not even officially out yet 🙂

Some updates, starting with the RPGs: both Roger Steel, Loren 2, and PSCD (I include it in the RPG even if is more of strategy/card game) writing and art is making good progress.

I also got all the base art ready for Queen Of Thieves! Below you can see the male romances in the new style (they also have an alternate outfit): 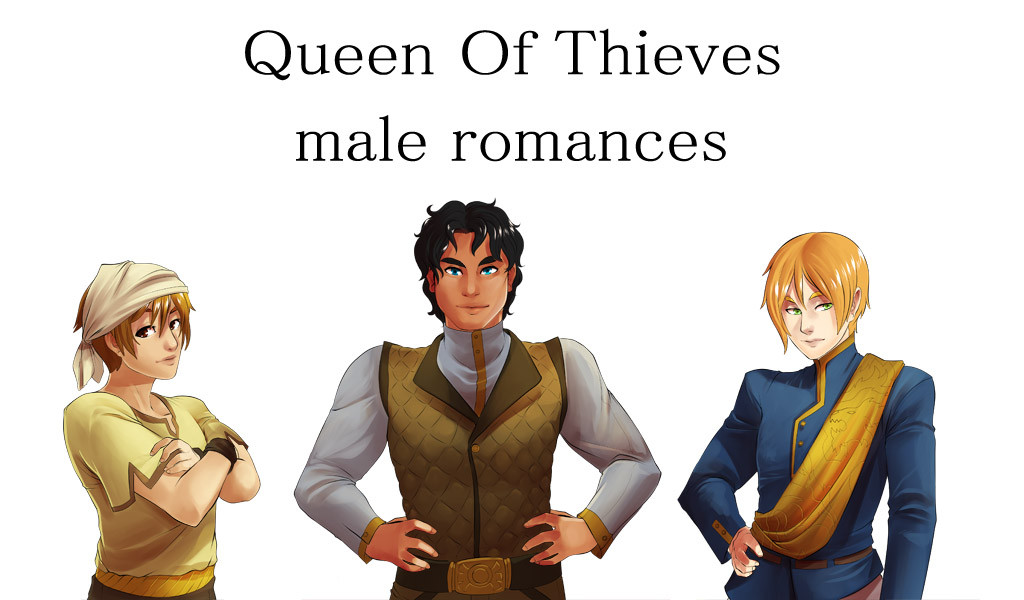 I am only missing the ending CGs/scenes, but I now have all the images for the base game. We’re thinking of adding a few extra outfits and poses, but that’s it 🙂 The writing it’s at good point as well.

Regarding the dating sims, good progresses have been made on all of them as well. It’s true that at this point, Nicole yuri will be delayed for sure on Q2 this year (so wasn’t out Q1 as I hoped) but is also true that the story is much bigger now, with more locations and several secondary characters that now have a bigger role.

Also, the other various dating sims are going at steady pace, as I joked in forums, it might happen that I’ll release two consecutive yuri-only dating sim at one point during this year or next year 😀

For the otome fans no worries: there will be Always Remember Me sequel, and all the RPG (which will be more similar to Loren, so not with complex RPG gameplay like SOTW) have otome contents.

On other news, I’ve started updating the games on Steam with the new Ren’Py, mainly to allow Linux achievements. I’ve also enabled cloud saves! I plan to update also all the demos on my own site later, but apart the Steam related stuff (achievements and cloud saves) there’s nothing really new compared to the versions on my own site.

I know it’s tomorrow, but I want to wish you a happy Valentine’s Day with your beloved one 🙂

To celebrate I’ve done a bundle with (almost) all my games on Indiegala: https://www.indiegala.com/heart

Also, my game Roommates together with many other famous games is on the latest Humble: https://www.humblebundle.com/weekly

What a better way to celebrate Valentine’s Day? 😉

This was a busy week, mostly planning future games. I’ve found two new writers, one of them is writing the Always Remember Me sequel (married/couple life!) and even if she finished only two scenes so far, I’m very happy of the results. There will be 10 scenes for each of the four love interests (Aaron, Hugh, Eddy and Lawrence) so 40 in total. Writer is trying to make one every 2-3 days, so it means that writing will take around 3 months (more or less). The good thing is that after that, I have already some art ready (I plan to add some more outfits to existing characters and some new secondary ones, but not much) so at least the art should be done quicker.

The other writer is working on a CYOA (Choose Your Own Adventure) style game, set in Aravorn. You’ll play as a single character (typical of those games) and it will be a “roleplay” game, in the strict term. You’ll face several situations that you’ll need to solve using your skills (there’ll be a character creation part) and there will be multiple ways to solve them. Also, skills/personality will influence the available options, and your choices will shape the character too. At least that’s the plan, but we’re still in the very early stages. No estimate release, however there’s a nice surprise… the game will feature romance, and one of the romance option (for all gender/sexual orientations) will be… Nagas!! 😮 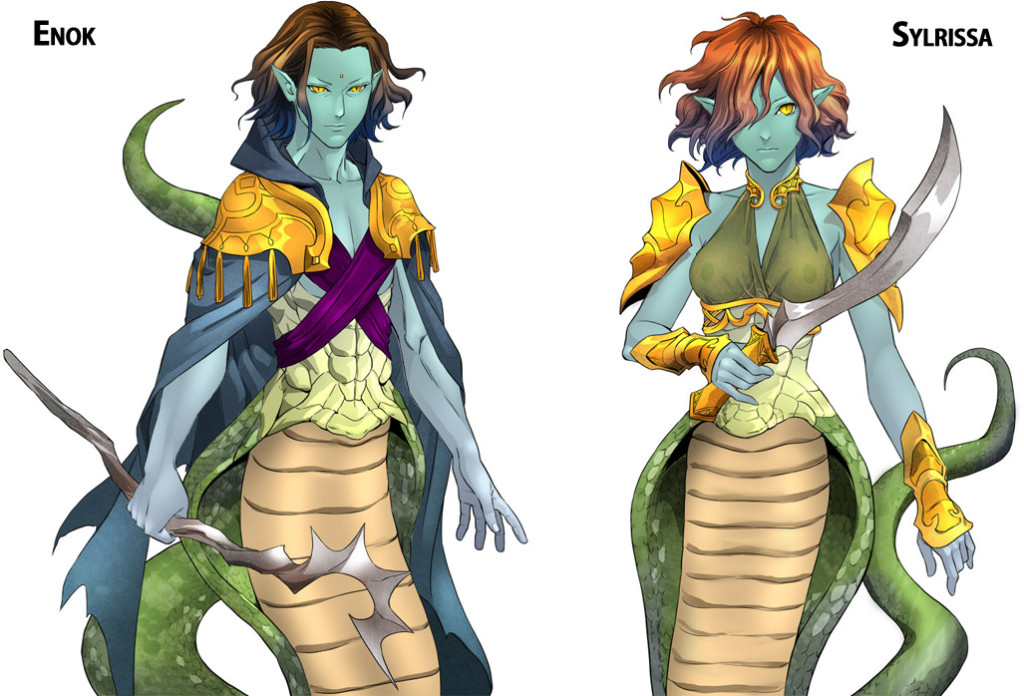 Once again I listened to customers/users feedback in forums, where they clearly expressed interest in a game with Nagas as romance option. So, here you go 😉

Now don’t get too excited since this game will probably take long time (beside the writing, it’s a kind of game I’ve never done before) so I don’t think will be out this year… though, you never know!