If you’re a developer or just a player, you’ll have noticed reading all around the net that social /online games “ARE THE FUTURE”. Literally everyone is doing it. Even Google, with his NaCl and the upcoming Chrome Appstore (at least with it people will be able to use their existing code and not use Flash or Javascript!).

But what exactly does this means for players, for indies and for the big AAA studios. I honestly belive that this is just a hype, a bubble that is going to explode. Still, we’re at the very beginning so many YEARS will pass before it’s gone. Let me explain better what I mean in some points:

1. I think players just look at the GAME, at the experience, they don’t care much if is online/offline or in which language is written to.
2. Social games right now are doing most damage to casual games. Also while I don’t have any real figures I really believe that this enormous amount of free content is going to damage everyone in the casual games industry, so that at one point it will have to end or shrink. People that once used to buy casual games from portals, now spend MONTHS playing the social games spending a ridiculous amount of money vs the time spent on them. Maybe also the crisis is helping this?
3. “Downloadables are dead”. This is far from being true. Steam basically is a giant, huge, downloadable webstore. There are many indies doing GREAT with downloadables. I’ve recently been selling Eschalon Book 2 as affiliate and honestly the download market doesn’t seem dead at all… 😉
4. There isn’t just one type of gamer, but several types. There are also taste changes based on the age and time constraint. I myself was playing Everquest almost 10h a day when I was at the university (doing nothing), then when I started to work seriously I completely quit that game and now I don’t play any MMORPG at all. I’ve noticed this same pattern amongst many other friend I know. So, a people’s tastes can vary/change greatly over the years
5. I know many younger people that don’t care about Facebook or social games in general. It’s a bit like saying that nowadays nobody reads books anymore because everyone watches TV or play games 😉 That is not true. You can still make quite good money with books, as well as other creative mediums.

So, while it’s clearly true that right now your best bet to make money is a social, online or MMO game (I’m doing some online game experiments too), this doesn’t mean that everything else is going to be dead soon. It all depends on your target market: if your target are teenagers or casual people, your best bet is to make a FB game now, rather than a downloadable (and still, a decent game on top10 of a major portal like BFG can bring in still LOT of money).

If you’re into niches like I am, you definitely don’t need to worry about which system you’re using. If your game can benefit from being online (for example to reduce the impact of piracy), then do it, otherwise you can just keep doing downloadables like Spiderweb is doing: he just announced his new game series called Avadon (I find hilarious the name because is very similar to Avalon). It will be a downloadable as always, he’s doing it since 1999 (or sooner, I forgot) and it’s surely easier than changing completely the kind of language/platform/system.

What about me? I am making some experiments right now with a Renpy downloadable client+php/mySQL server, and I must admit is VERY HARD. I am making it though 🙂 But I have intention of keeping this project running as a “side-project” because I want still to make normal downloadable games as well.

Time for a screenshot I think: 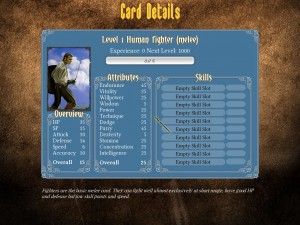 Not hard to guess what kind of game it is… 😉

Recently I thought about this because one day of last week I went really grumpy because my php/mySQL code wasn’t working as it should for my online game. Then I tried reading about Ruby, a language which was suggested by a developer that follows me on Twitter, but I know php too much well and I don’t have enough time to learn a new language right now 🙁

So I thought to give up coding, and just hire people/outsource programmers. But, to be honest, my past experiences haven’t been really convincing. I don’t have lots of funds to spend on coding, but that is only a marginal aspect. I talked with several other indie developers, who have way bigger funds and they all agreed on one thing: if you want to do something right, the only way is to Do-It-Yourself.

That is, especially if you are working over internet. If you know the other person in real life, it’s going to be very different. Also, I’m talking about coding here: there’s nothing wrong in outsourcing art (I’ve been doing this since 3 years now) or music. But coding is really something you need to do yourself, or have someone always available to modify/change the code because you’re going to need him/her to fix the bugs that will inevitably be found even months after the game release (this last thing is even more true in my case, since I wanted to make a webgame).

Right now I’m finishing lots of normal offline games I started, some even last year (like Card Sweethearts) some this year (like Vera Blanc, of which you see a screenshot in this post). Because of that, for now I’m only working on my webgame a few hours in the morning, and then writing for my VN/dating sim/light-RPG in the afternoon, or just relax doing some manual works. So far it’s working pretty well.

Let me give you a suggestion, if you’re indie, never start 6 projects at once like I did this year – it’s going to hurt you 😀

But not the kind of game you might think 🙂 Even if to be honest Vera Blanc games could be considered horror as well, not splatter, but if you check the video below:

I’m sure you’ll agree that isn’t definitely a romance game! The final description of Vera’s death is particularly gruesome (poor Vera, you wouldn’t really bite her neck that way). So, actually, with the Vera Blanc series (which should be out next month for sure!) I am already doing a normal offline mystery/detective/horror game. What I want to do instead is something different: a multiplayer horror webgame.

The idea isn’t particularly new of course, I know well there are many zombie-MMO like Urban Dead for example (which I play from time to time after discovering it last month). It would be a free to play game, and not completely text-based, though I’m thinking to use simple php/AJAX stuff and not Flash, so even people using iPhone/iPad will be able to play it 😉 The setting would be sci-fi, involving humans, mutants and robots. Three different factions eternally fighting each other for survival. It would use an action point system, and I have really LOTs of ideas (a body-targeting system like Fallout during the fights for example) but of course, first I’ll release a basic version 1.0 and then will keep updating it, since it’s how most webgame work (and this way I can also see if the public response is good enough for me to pursue this idea further!).

So right now I’m doing some php/mySQL tests, which will be also useful for some other online only/online enabled game I plan to make in the next months. Of course, I’ll still release the normal offline games as I’m doing now, but I want also to test the waters and expand my horizons. I had this idea already long time ago, when I wrote in a blog post:

“I have what I think to be a pretty cool idea that all Magic Stones fans will surely like, a sort of online rpg card game. The advantages of a online-only game are lots, for example multiplayer possibility, no need to store the data on your pc, possibility to play the game anywhere (even at work! eheh) and also the micropayment thing, so that you can pay only for how much you play the game (have still to decide the details, but this would allow much more flexibility on payment methods).” 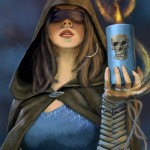 and I have already a bunch of beautiful hand-drawn card images, like the one you see on the right, ready to be used! But I never had the time so far to work on anything else except my VN/dating sims, but I want to take a break to release this card rpg game, since it’s about time! 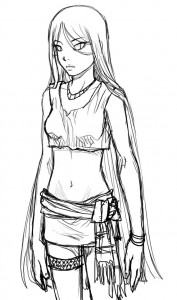 Or better the latest heroes to be drawn for Planet Stronghold are on their way. You can see Rumi on this post on the right, she is a Psionicist and she’s blind since she was born. Once colored I think will be an awesome addition to the pool of characters already present in the game.

If I have some time next month probably will make a page on the official game website with the whole cast of characters you’ll meet in the game. Almost all are heroes you can control in the battle, but there are a few exception like the Royal Family (King, Queen and Prince) and some very minor robot servants.

I’m really pleased of the final appearance of Planet Stronghold, is probably going to be one of my most beautiful games, at least in term of artworks! Of course I’ll do my best to make even the story and the gameplay to be as good as the visuals 😉

A few last words about the beta testing which should start hopefully next month: in the first phase (open beta) you’ll be able to download the game, which has an autopatcher/updater system so that everytime you launch it, will notify you if there’s a new version available, and download it. I plan to make this part of testing free, until at about 20-30% of the game, then the closed-beta will start and people who want to experience the game immediately will be able to pre-order the game at discounted price and download it immediately with the autoupdater.

During the beta I hope people will send bug reports and/or make feedback comments to my forums to help me increase the game quality.

Once the game is finished (ended the closed beta-test phase successfully) will be released normally as my other games. I know other devs that had great results with this system so I’ve decided to try it myself! 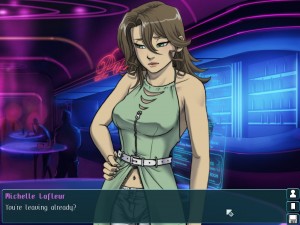 A lot has been going on lately for me. In random order, here’s what happened in last months: