Today while browsing on internet I found a nice game from Niels Bauer, called “Empires and Dungeons”. It is a sort of mix between dungeon exploration and military conquest, in the style of Civilization or better the old Heroes of Might and Magic series. It has lot of features, like resource management, units/structures building and battles with various options.
The tutorial is very well done explaining every single step, so even if you aren’t exactly an expert of strategy/rpg games, you’ll be able to understand how to play it. Was really a pleasant surprise for me, always looking for more games of this kind.

Ok I want to have a bit of fun so I decided to write the:

Note: the following text is probably exaggerated a bit, but is based on real facts! I’ll call the developer Joe Smith.

Ok hope you had a good laugh. That’s what happened to myself too, except for point 10 luckily! 😀

LOL! well, I just read this post from cliffsky blog… and must admit that I agree with most he said in there. I’m sure he won’t put his games on any portals in future 😉

However, a thing nobody says is that when you’re selling directly, you must expect very little earnings until 1-2 years have passed and several games have been released by you. Seriously, even a good game, if is the only one you have, won’t make you more than 200$/month. Surely there can be exceptions… but is more like 1 out of 1000 than 1 out of 10 !

After some recent troubles I decided to postpone the deadline for estimated release of usm2… I hoped to finish the beta for end of september, and indeed there isn’t much left to do. But I’m not a machine, I’m a human 🙂 so I really needed a break. After working hard for almost 2 years, I decided to take a small break of a week or so.

I was getting to a point where I could stare at the code for 2 hours and not find a very trivial bug! quite a signal of stress… 😀

Also I don’t want to ruin usm2 making a quick release. I want to plan carefully and release already a good beta. I want people to say “ooh great game!” already by playing the beta version. For this, I think I need 1 month more…! 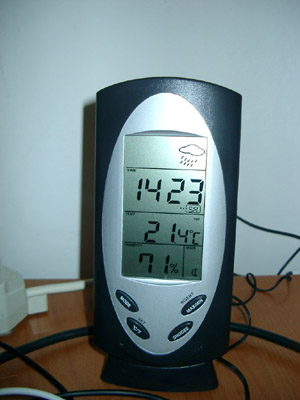 My girlfriend got a present from her latest online-flower purchase… I don’t know the technical name but is one of those instrument to measure temperature, weather, humidity, etc.

Well look at this picture… I’m a bit scared, 71% humidity inside my room?! now I understand why I have sometime bones-pain …!!

I need to fix that stove as soon as possible…