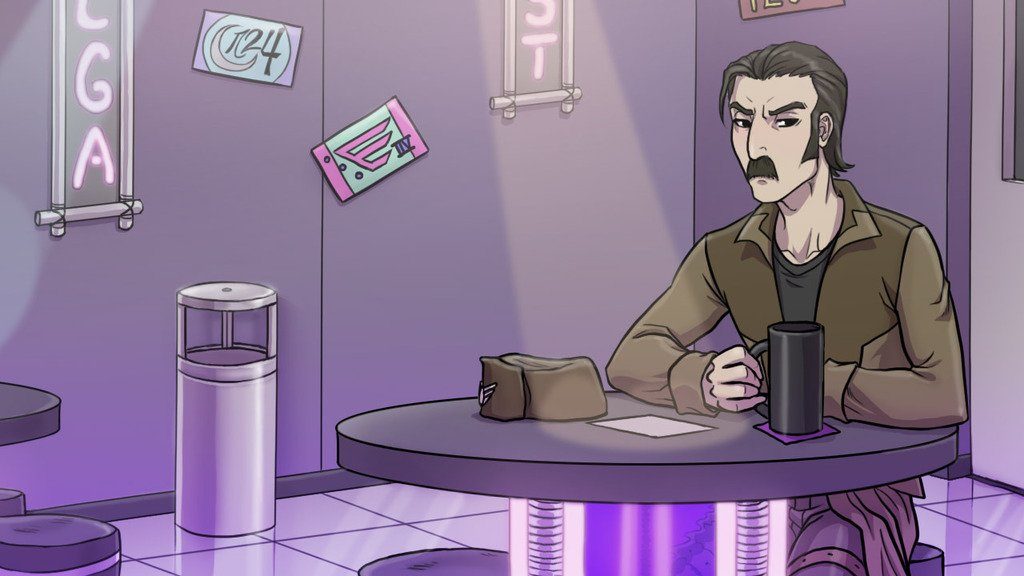 First of all, Happy Thanksgiving for those who celebrate it. As you probably already know, I’m doing an Autumn sale both on itchio and Steam.

And now let’s talk about Philipp! For some weird reason, I really like this character. Yes he’s an asshole, he hates aliens (but in the story it will be revealed a backstory that somewhat will explain this) and tells bad jokes. But still it’s one of my favorite characters to write! His camp talk will obviously take place in the colony pub where there’s no shortage of alcohol 🙂

Before joining the army, Philipp Koenig was once a renowned bounty hunter, or at least that’s what he wants everyone to believe. In reality, he was a treasure hunter, always looking for buried alien valuables.

His lack of social skills, combined by his passion for drinking, earned Philipp a very bad reputation. Despite his drinking habit, Philipp’s abilities on the battlefield and accuracy with sniper rifles are never questioned. However, every higher ranked officer that dealt with him earned Phillip the label as “a total pain in the ass.” He often questions orders, and he does little to hide his deep dislike for aliens.

To no one’s surprise, Phillip is a loner. His harsh manners combined with terrible jokes ensure nobody wants to get closer to him, let alone gain his friendship. Most of the team members tolerate his presence mostly because of his incredible prowess on the battlefield.

This time I’m going to do a small update about one of my other games in development: Corona Borealis. I’m pleased to say that we’re at very good point, but as you can imagine, releasing the game during the “Christmas rush” wouldn’t be a wise choice, so we’re going to wait until new year. 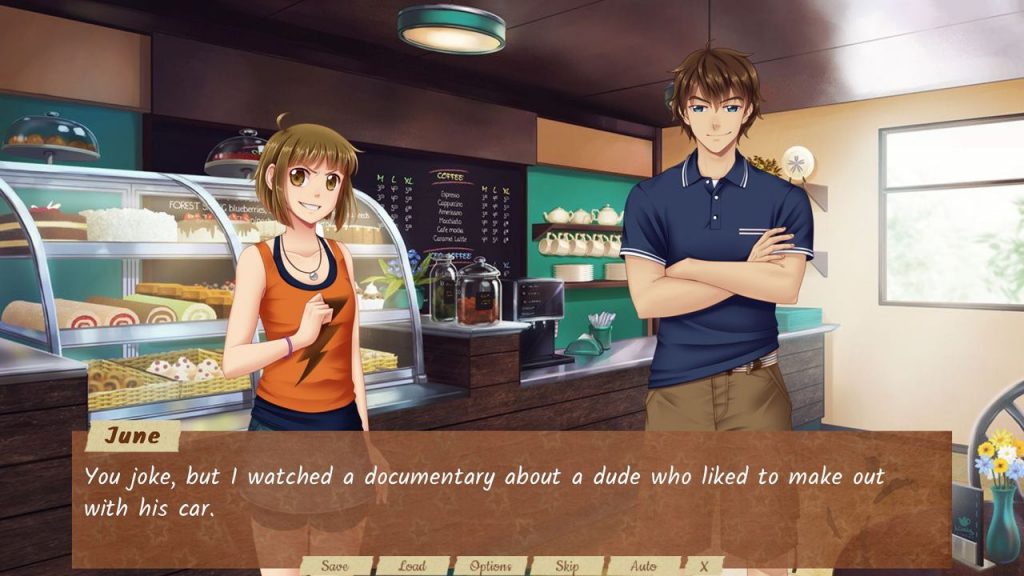 In the screenshot above, this is what happens when you keep saying “Can I romance this…?”

Next week I’ll also write an update about my other dating sim, the first really yuri-only dating sim released by me, Volleyball Heaven! 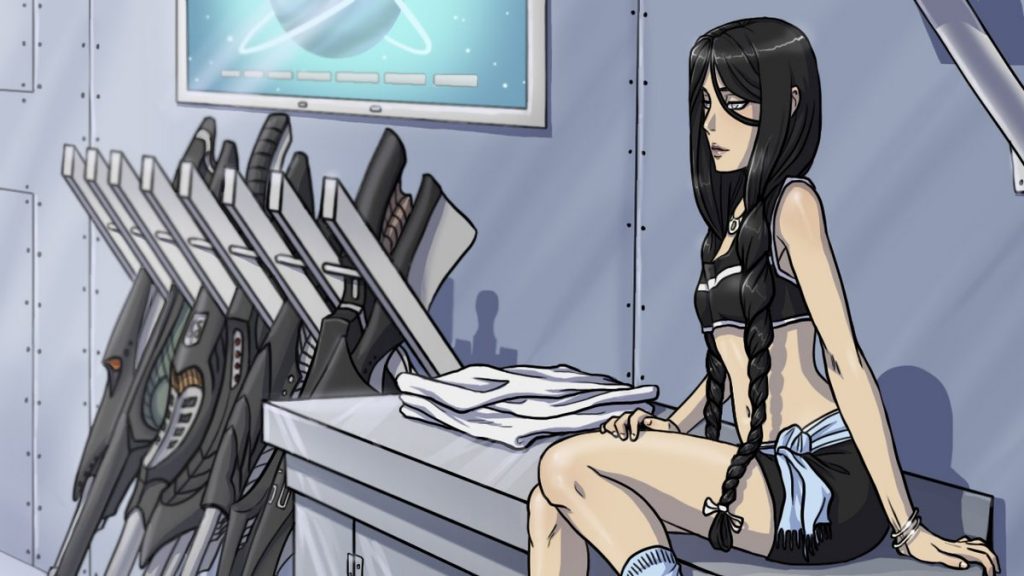 Rumi Kai originally joined the military as field medic. However, one day Lieutenant Shatz saw her psionic skills at work and convinced her to become a combat soldier. What Shatz couldn’t imagine was how mistreated Rumi would be at the training camp. The camp’s zealous scientists found out that Rumi’s psionic index was two levels higher than the maximum level ever recorded in the time of Graciela Reyes (one of the first human psionics). Thus they began the “experiments.”

Rumi was no more than a test subject, and unfortunately during her “training time” she lost her sight. Luckly, once Tom found out what was happening to Rumi, he used all his influence so that she could be released and join the regular army.

Since then, Rumi Kai has always been considered an invaluable member of the team thanks mainly to her incredible psionic skills and code of honor similar to that of the ancient samurai. She treats enemies with respect, opposes decisions that she doesn’t consider “honorable”, and sometimes can show admiration for the most formidable opponents.

The blog posts are written every 2 weeks so the info here is not super up to date, however for those not following me on the other social networks, I have tweaked how the skill checks work. Take a look at the screenshot below: 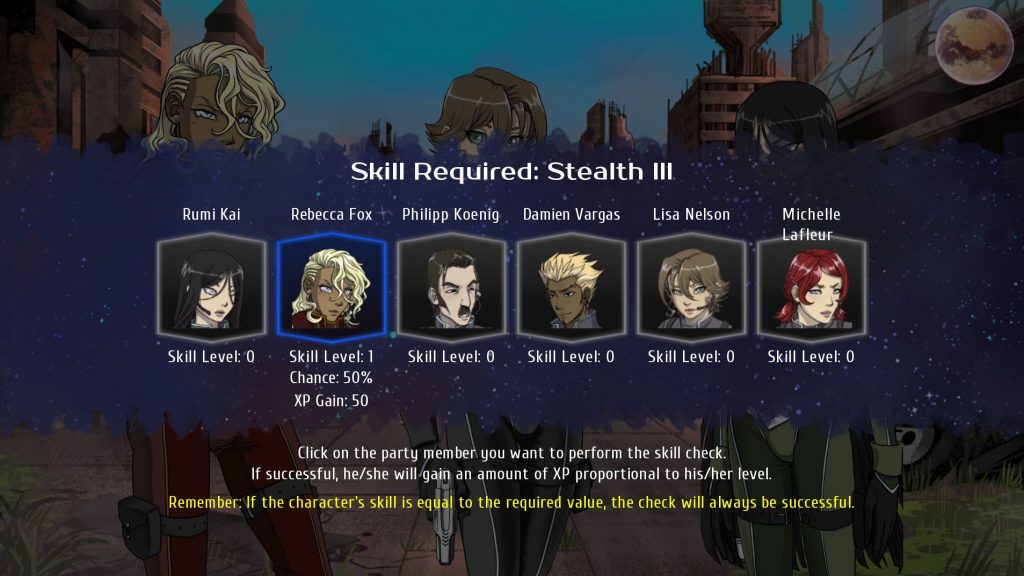 Initially I simply reused Cursed Lands skillcheck system. That means: if you have the required value of skill XYZ, the check is successful. However I quickly noticed during testing that it wouldn’t work in this case, for a simple reason: in Cursed Lands the checks were done only for the main protagonist, here instead any member of the current team can do the check!

As you imagine this meant that out of 6 active party member characters it would be very easy to find someone with the required skill, so I decided to change it this way:

Differently from the first game, the random number are generated in a way so that the infamous “save scumming” is not working. Even if you save before the skill check and reload 1000 times, the result for that particular check with that particular character will remain the same.

I’m doing it this way since in the first game was a common strategy to save just before a skill check and try until you make it. However on the other hand, the success percentages here will be higher on average, so you should be really unlucky to fail a check (and even if you fail it’s not a game over anyway).