Well, more like “running with a girl”. Indeed Clara is a very sporty girl, and to win her heart you’ll have to keep her pace 🙂 I just got some events for Clara and Marian and I can feel the game is already taking shape. I should use schedulers more often, since they’re great fun, add more strategy and make the game unpredictable.

In the screenshots below you also see the infamous “relationship bar”, which is present in almost all my games (except Heileen). Probably in the final version of the game the bar will be replaced by something more “floreal”.

I also like the painterly backgrounds, I think they integrate well with Deji manga artwork. A pity those BGs artists are always so slow…! More info coming soon, with new pictures of the other girls (Jill and Marian). 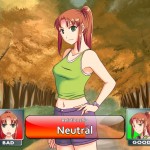 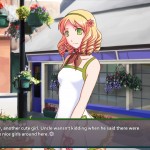 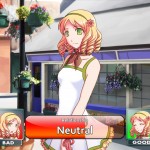 Yep, that’s the title I’ve come up with for Heileen 2. I remember there was an old game called Hands Of Fate, and I thought would be a good sub-title for Heileen 2, since the game largely deals about the tarot cards, and concepts like “shape your own destiny” and so on.

A friend of mine that was playing the demo, which isn’t out yet but I wanted to show him, made a fun comment how the game also borrows some ideas of Lost. I really don’t think so, since concepts like space / time travels and such aren’t present in the game. Really, everything is just a dream… 😉

Some more info about the game:
– it will feature multiple endings, so far I have planned 10 but probably will be more. I don’t think will reach the amount of endings of Bionic Heart (24 is hard to reach) but there will be still many interesting ones!
– as you might have guessed you’ll be able to choose between virtues or sins. There isn’t really a “good” or “bad” way to end the game, but the endings should reflect player’s action thorough the game. If you were lazy, you’ll see the Sloth ending, and so on.
– relationships: while you can deal only with Ebele and Robert in the “real world”, you’ll met lots of old and new faces from the dreams. And at the end of the game new cool characters will be introduced. Arrrrr!

While I wait for the final release of ElimiNation, I have time to tease you with some more screens from Heileen 2. First one shows a very angry Ebele, under a beautiful sunset. Choosing to set the game in a tropical island was a very good one, since there will be really some nice backgrounds. A good mix of warm colors and cute characters 🙂

The second screen instead shows Heileen in bed, with Lora playing very nice, asking her what she wants for breakfast. It seems a very happy moment for the two, but will it last? Heileen’s relationship with Lora was always a bit rocky, and full of misunderstandings. 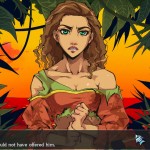 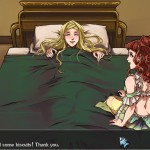 The strategy/wargame Elimination (done in collaboration with Phelios) is getting in the final test phase. Everything was going smooth, until the programmer attempted to do the Mac build. As always, something was crashing 🙂 But after two days the mysterious bug was found ( a problem reading text file because of the different ascii code used for the carriage return).

Tomorrow morning I should get another beta build and begin the final testing. If everything goes well, you’ll be able to be eliminated by the end of this month! 🙂

For those that don’t know what I’m talking about, ElimiNation is a sort of wargame inspired by Risk, but that plays totally different. There are several type of units, cards and the fullgame will feature 3 campaigns each one with a unique faction (with unique unit type).

To know more about the game you can check those 4 videos that are part of the tutorial included in the game: Elimination videos

I’m currently working on getting the first game Heileen to work on xBox Indie Games and iPhone. I just started the port to XNA and is coming out nicely even if I’m just at the beginning 🙂 I haven’t started looking ath the iphone yet because there’s an additional problem on that platform: the screen size, which is really small. So I’ll probably have to find a VERY SMALL font, and resize everything to fit the smaller screen. Sigh if at least was 4:3 ratio, but instead has a weird resolution of 480×320… 🙁

Anyway my goal is to keep working fulltime with Renpy and the Pc/Mac/Linux platform and in spare time go on with those other ports, since I’m dubious simple VNs can do well in those market dominated by young male players 😉