First of all, to all my Americans followers, Happy Thanksgiving! 🙂

I am doing a sale on itch.io: https://winter-wolves.itch.io/
And of course on Steam: http://store.steampowered.com/search/?publisher=Winter%20Wolves

Every purchase on itch.io comes with a free Steam key. You might have also noticed that I started pre-orders there for both Cursed Lands and Love Bites. Usually I don’t like to do pre-orders much, but in this case both games are in a very advanced state (as you know if you read the previous blog post) and since some people asked, I thought to do it. 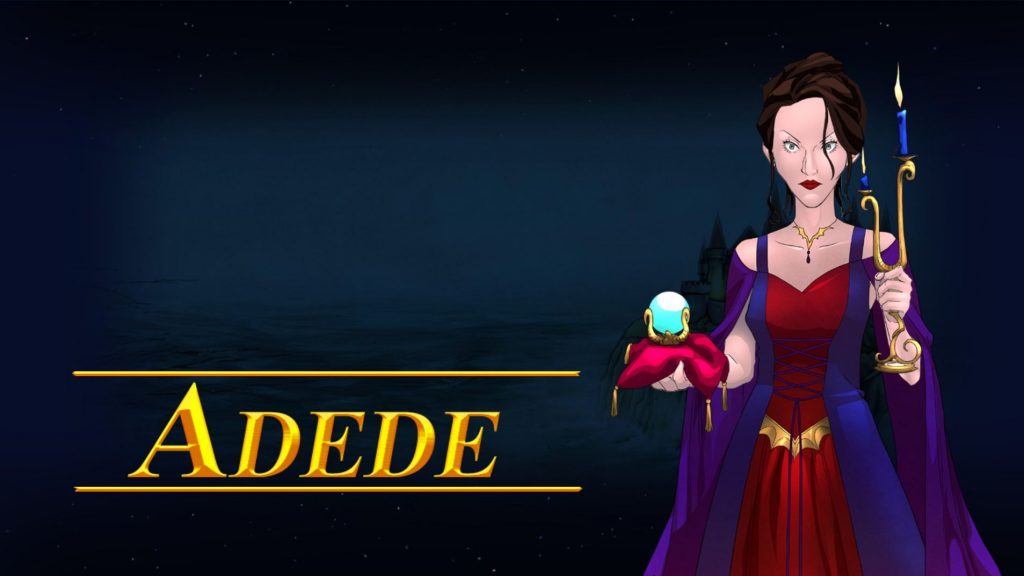 In the image above, one of the animated intros of the various vampire boss fights

And now some updates:

That’s everything for now, but hopefully next time I’ll have some more good news 🙂

First of all, I made an updated version of Roommates with completely optional “nude romances CG” currently in beta testing. More info/details in my forums here: http://www.winterwolves.net/viewtopic.php?f=34&t=4078

Now let’s talk about today’s post: 7 months ago, in April, I made a post with the same title. You can find it here if you’re curious: https://www.winterwolves.net/blog/2017/04/love-bites-cursed-lands-update/

So, after all those months, how are things now? I already posted an update in previous blog, but today I’m going to go deeper. 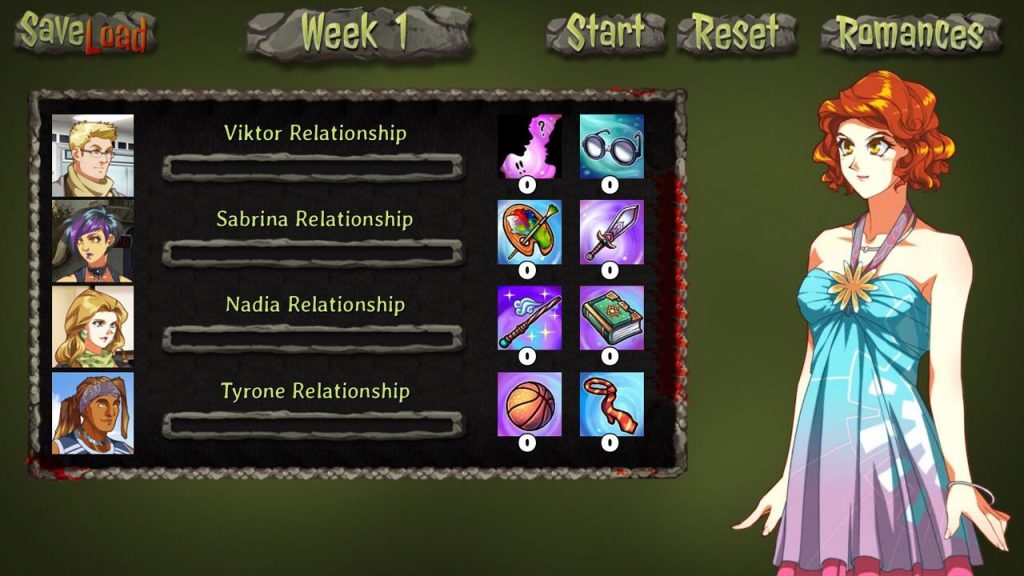 As I wrote back then, this game has a scheduler but no stat raising. The relationship bar is increased simply by spending time with each character, it’s not influenced by the choices. The things I said in that blog post are still valid, but using the image above I want to explain how the different endings work.

Originally I wanted to keep those values secret, but after thinking more about it, was pointless – since a game must not be hard by making people guess which choice will increase what variable 🙂

So in summary each character has two possible… let’s call them “variants”. Viktor for example has Social and Nerd. Sabrina has Artist and Huntress. Nadia has … wait, I don’t want to spoil the fun!

Anyway, with your choices in the dialogues, you’ll influence the character (for example by making Viktor more sociable, or on the opposite by pushing him to take advantage of his nerd side). Those values will determine, at end of the game, which ending you get (beside the romance ending and CG which are fixed). Probably better call it epilogues, more than endings.

Here’s the mystery of those hidden variables explained!

I already posted a few on twitter, but here I’ll post a male and a female one to be fair! 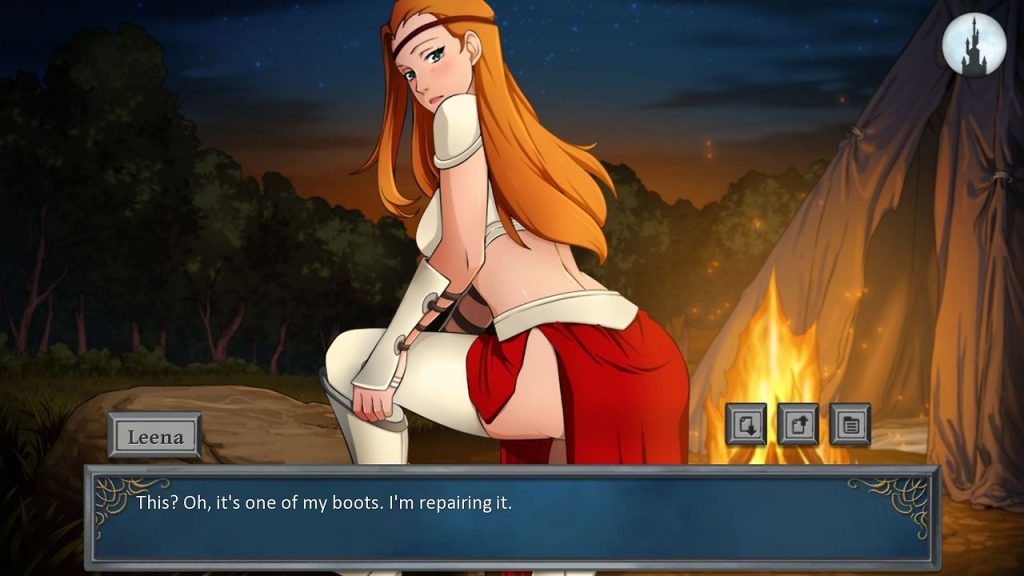 Leena in a very… suggestive scene beside the campfire 😉 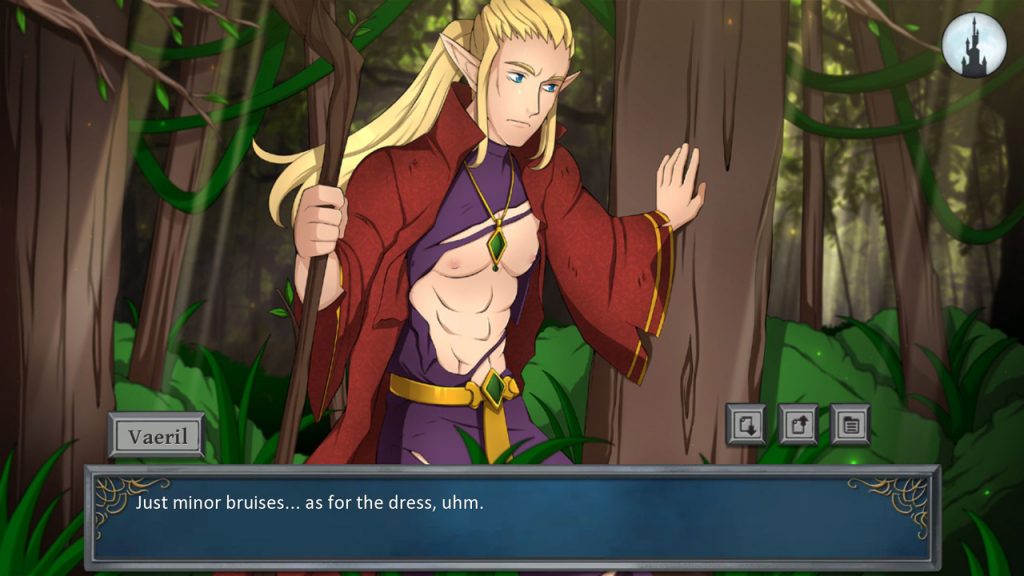 Vaeril trying to get through a forest and, ops, his precious dress is scratched open! Well, considering he’s a druid he’s in good shape, don’t you think?

What are those bonus CG? Simply said, after the big success of Amber pin-ups, I decided to add some more for this game. As you probably should know, the original artist is the same who did Loren art and sadly he doesn’t work for me anymore. So I had to use someone else, but that has a style similar enough I think. In any case, the result is good in my opinion.

Those CG are used in two ways: to illustrate a scene already in the main romance story, or to illustrate two bonus scenes when the player is a couple with the love interest.

Indeed, a big difference vs all my previous games, it’s that in this one if you want you can sleep with more than one character in the same playthrough – yes, unlock the “final romance CG” with more than just one  character. Of course, this is not without consequences ! In this case the usual “jealousy scene” will trigger and you’ll need to pick one love interest.

After you choose the love interest, all other romance routes are blocked, but as “reward”, you get two more bonus scenes with him/her, as couple (another thing that was missing in my previous games).

Plus of course there’ll be the ending epilogues which will change based on this (and also on other choices in the game but that I can’t reveal because are big spoilers!).

The game script as predicted it’s already 200,000 words now, with many boss fights missing and all the endings/epilogues yet to write. I wouldn’t be surprised if the final script will be around 230-250,000 words. Yes, another SMALL GAME ™!

In conclusion, I really hope that you’ll enjoy both games when are out, because as usual they’re big, with lot of content, very replayable, and we’re putting a lot of efforts in making them !