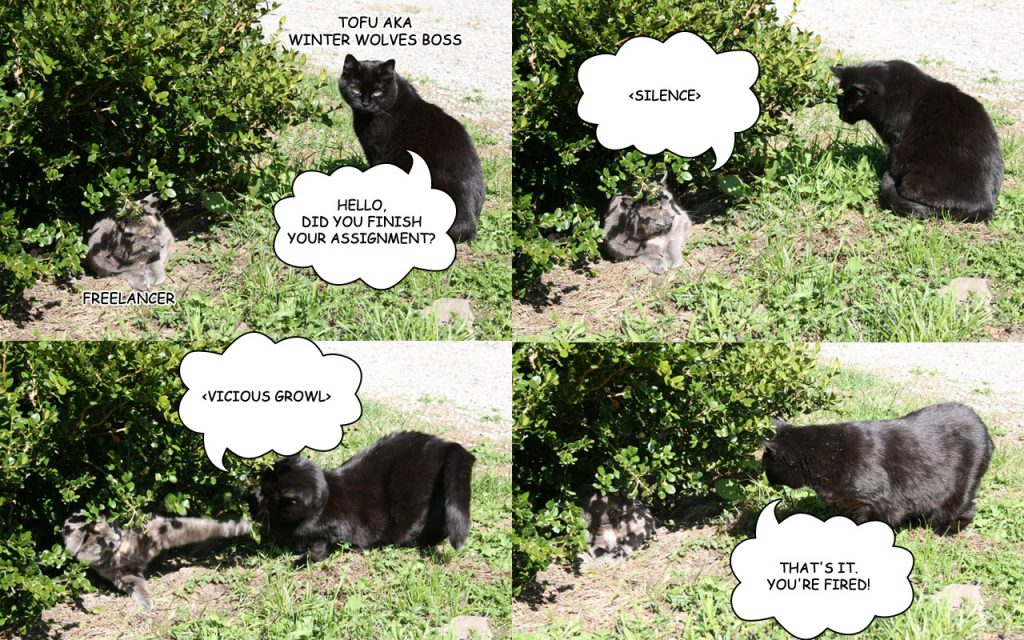 In the image above, this is what happens if you make Tofu angry. Be careful!

I’ve always been a rather unique indie. My main peculiarity was to release games at good pace, without necessarily sacrificing quality (at least, in my intentions!). I’m not writing this to brag, but as a matter of fact. And of course, doesn’t mean that my games were more successful than those of other indies.

Why I work this way? Mainly because I get really bored if I am always working on the same thing, same game, same story. If you think that SOTW was my game with longest development time, and still it was “only 10 months” (for the base game) which is really nothing compared to how long most indie games take (usually at least one year, yes even for normal dating sim/visual novels). And in my case was a full featured RPG…!

Consider also that except for some of my first games, all my stories are at least 100,000 words long, with an average length around 170-180k words! :O

As I said, I’m not bragging, wordcount in definitive means nothing (but if it’s well written, for sure players appreciate a longer story). Many indie colleagues are ten times more successful than me making smaller games and taking much longer each one. But I wouldn’t even try it, simply because I know already that I wouldn’t enjoy the process.

So what does this has to do with the blog post title? well like many other indies, I get a lot of people who want to offer their services (writing, art, music, even coding though it’s more rare). Since I made so many games, I worked with A LOT of people in the past.

I’m only aiming to give my humble advice to anyone who want to collaborate with other indies to create games over internet. This is my opinion, but I believe it’s also valid for other indies (or even other freelancing jobs in general). So what separates someone doing it professionally vs someone doing it in their free time?

There’s literally nothing worse than not hearing from a collaborator over internet. This doesn’t mean you need to email every day but, especially if some work is expected from you, don’t disappear. This is literally the worst thing ever for me, something that really can’t forgive. Of course I’m talking about weeks (even months lol) of radio silence, not days.

Believe me, it’s much better to hear even stuff like “sorry but a new expansion for the MMORPG I play is out, so updates will be slower for the next week”, than hear nothing. Of course, strictly related to this, there’s also…

This is obvious, but it’s probably the thing all my collaborators miss. I’m more lenient because I know how hard is to met a deadline myself. However, there’s a lot of difference from missing a deadline by a day or a week, or by months…

But still, if you do the point above and keep in touch, it’s still somewhat OK. “Look boss I can’t finish XYZ by end of month, but I promise to finish it before the next” etc. Obviously, if you always miss deadlines one after the other… well that’s not good! 😛

Another seemingly obvious thing, but that many times doesn’t happen. You don’t know how to do a task or are unsure if you’ll make in time? don’t say “yes I’ll do it” and then maybe either do a bad job, or be late or any other bad outcome. Another thing to avoid is coming up with sudden expenses before talking with the other part. The writing is going to be twice long because you think you’ll do a better result? inform,discuss, not write twice the word count, and then show the bill after the work is done. This is not going to make you get more work from that person…

In conclusion, if you keep those 3 points above in mind, I think you’ll have a much easier life as freelancer. Honestly? even if you only follow 1 or 2 of the point above you would be already a good freelancer! 🙂

Notice that I didn’t talk about skill. First, because except coding, everything else is based on tastes after a certain minimum level. It’s better the art of Nicole, Roommates, C14 Dating, Loren, or PSCD? depends on tastes. Same for music and also writing.

But also, because sometimes someone who keeps the 3 things above in mind has more chances to get work (from me at least) than someone 10 times skilled but that’s always late, lies or disappears for months. I’m making this example, PSCD artist: you probably know that the character art was the main reason the game greatly underperformed at launch (now it’s doing well after the manga update).

Still, that artist definitely meet ALL the 3 points above. He is honest, works fast, always asks when it’s the deadline and if he cannot met it, emails me. Result? since people didn’t like his character art, I hired him to do other art: a LOT of icons for my future RPGs,  Amber’s all crafting icons, the shop builder rooms, colored all the PSCD manga CGs, and he’s doing even more work for me right now.

Speaking of skill, it’s also true that sometimes I have to stop working with someone if the results aren’t “good enough”. If I get a lot of comments like “this art/music/writing is bad” all for the same collaborators, well sadly I need to run a business so I need to think mainly about what customers say.

If you’re short on cash it’s fine to work with amateur (that don’t follow the 3 point above), just don’t expect to get anything done very quickly.

Well hopefully this post was useful for someone and wasn’t too boring! Next time I’ll talk about the games in the works and their status 🙂 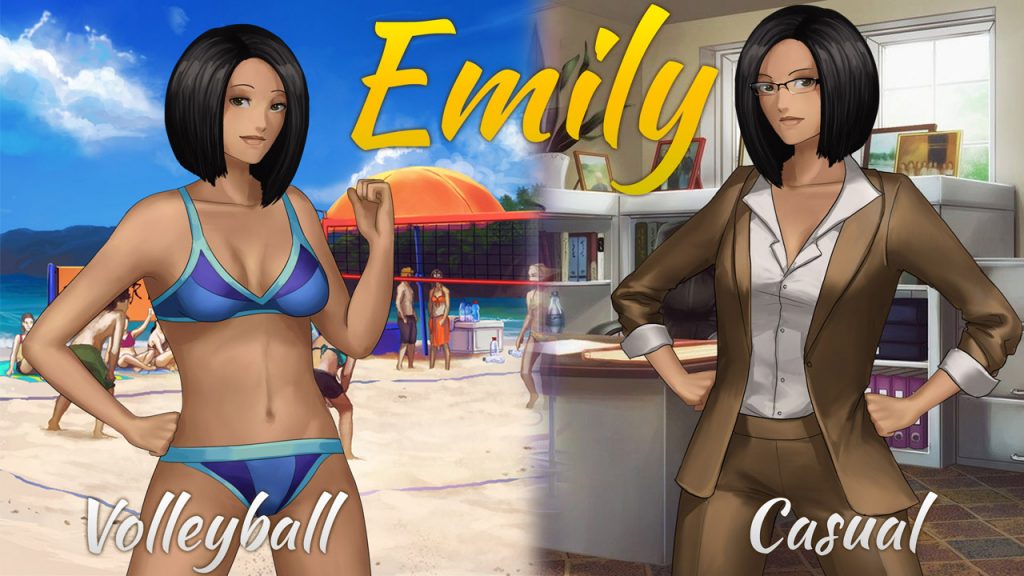 Last but not least, Emily. Originally was supposed to be a “secret route”. But if there’s one thing I’ve learned doing many games, is that those secret routes remain secret for maybe a day… 🙂

And now let’s introduce Emily! If there’s time I might tweak her hair style since maybe looks a bit weird right now, but otherwise I think she’s good to go.

Born in the Maritimes and growing up with her Métis mother on the Canadian western prairies while her Indigenous father, a residential school survivor, worked on oilfields, rigs and ships, rarely returning home, Emily Madison has always prided herself on her self-sufficiency, discipline and focus. As a hardworking and dedicated student, Emily’s athleticism and drive took her to the verge of representing Canada in the Olympics until a training injury wrecked her dreams.

Since coming to terms with her sexuality as an undergraduate, and after a couple of brief unsatisfactory affairs, Emily recognized that her happiness lay in a committed long-term relationship. Her first such relationship lasted until she graduated, and the second took her to Asgard College, where she took up a scholarship to study sports medicine, recognizing her days at the pinnacle of competitive sport were over.

After gaining her doctorate, Emily was offered a position as junior lecturer and encouraged by the College’s commitment to developing a semi-pro college beach volleyball team – building upon the town’s boast of being Beach Capital of the World – set about founding the Asgard Valkyries on top of her other academic responsibilities. The first year proved to be a disaster on several fronts.

Despite their deep and longstanding personal differences, both Marksons proved to be elite players and easily won places on the team, as do Rika and Lana. But the Marksons’ mutual antipathy, Rika’s overriding desire to prove herself as an investigative journalist, and Lana’s personal issues combine to leave the team on the verge of imploding, consequently dealing Emily’s reputation and fledgling career a heavy blow.

In a final humiliation, her partner ends their relationship into which Emily had invested a lot of emotional energy to take up a position on the West Coast. At the beginning of the new academic year, Emily finds herself in an uncharacteristically fragile emotional state, with personal responsibility for a dysfunctional team, and her competency under question.

Into this maelstrom, Kayla arrives. Let down by Lana, who had briefly taken on the team captaincy lacking other suitable candidates, Emily sees in Kayla a final chance to help relaunch the team and her reputation. Feeling guilty but unable to see any other way out of the predicament she finds herself in, Emily gives Kayla the captaincy and can only watch in trepidation as the young woman struggles to combine the unwanted responsibility with her academic workload… and all the while, trying to keep unwanted yet powerful feelings from leading her astray, with life-changing consequences for all concerned. 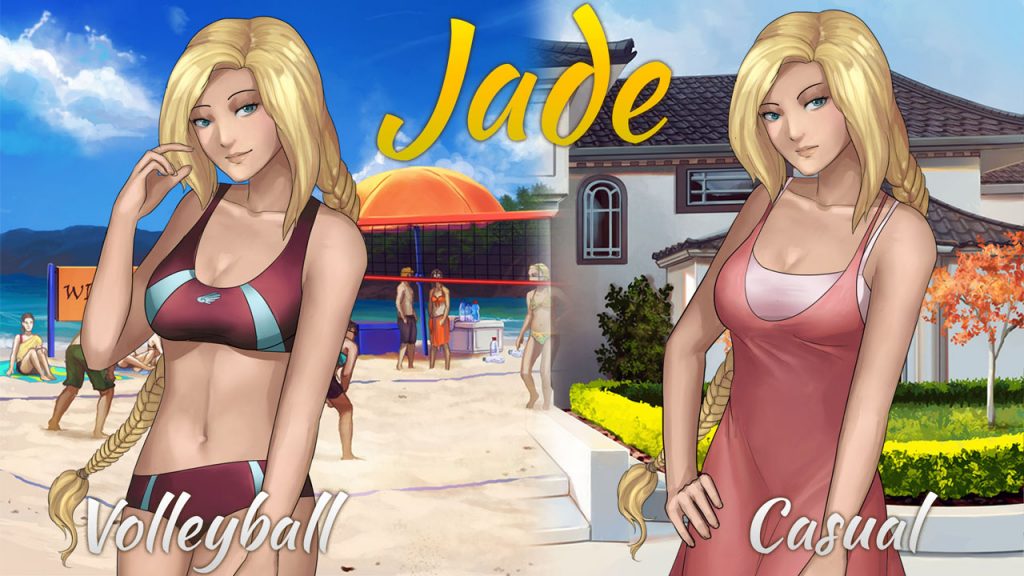 The writer and I refer to this character as “the ultimate babe”, and you can probably guess why 😀 Jokes apart, I really like the character design of Jade, one of my favorite of this artist together with Shiori of Summer In Trigue.

And now, everything you need to know about Jade directly from the writer:

The most traumatic period in Jade Markson’s childhood occurred when her parents adopted Zoe after her cousin’s parents were killed in a light aircraft accident.

The cousins had never been close despite being the only girls in their generation of Marksons, and Zoe’s sudden unavoidable presence turned her life upside down. The only comfort Jade could see in this tragedy was that while her caregivers were busy dealing with the constant fallout of Zoe’s latest escapades they effectively ignored her and let her do as she pleased.

Jade had always been a reserved, quiet and studious girl, most content when drawing elaborate costumes and imagining herself the natural daughter of a simple artisan couple who would one day show up on her fake parents’ genuine marble doorstep to reclaim her and take her back to share their humble existence.

Never comfortable being the heiress to what Rika refers to, with only a little bitterness, as ‘the magic Markson kingdom’, and painfully aware of the moral, ethical, and personal compromises that have to be made in building and maintaining great wealth, Jade retreated into her comfort zone, trusting few would value her for herself as opposed to her wealth, her beauty, and the position into which she was involuntarily born.

When she enters Asgard College – which her family helped found and where her father sits as a regent, with the pretension that it would one day become known as the Harvard of the Gulf – she is resigned to the fact that Zoe will be there too. Their joint presence at the young campus symbolizing that even the local elite see Asgard as every bit as prestigious as the northern Ivy League institutions.

Athletic and sporty, she is virtually press-ganged into the Asgard Valkyries when few other college women are willing to play alongside Zoe, who is not only difficult to get along with but whose outspoken brand of activism has given the whole team an unwarranted reputation in this socially conservative state.

When Kayla arrives on the scene, she is unsure what to make of the rough-hewn young woman. Being a friend of Lana’s, Jade is not expecting much of her. But when Kayla is unexpectedly drafted into the captaincy and as the consequences of her decisions play themselves out over the course of the year, Jade realizes that this extraordinary woman might change her life even more profoundly than Zoe did over a decade before.