A complaint I heard (not too often to be honest) about Cursed Lands, was that some CG look different. Indeed, another artist did them, so that’s the reason.

When writing the game, the original content was much less (in truth it’s hilarious to say this, considering it was still around 200,000 words!!!). In case you don’t know, I added about 30-33% more content myself, in particular “extra romance scenes”. I felt the original script while was good telling the main story and characters backgrounds, didn’t go deep enough in the romances, and especially the “after”. In many games (including mine) the romance subpath ends when you make love/kiss/unlock the final scene with the love interest.

In Cursed Lands (and I plan to do the same also in future games) I wanted to break this system, since I also think romance scenes in which you’re already engaged or in a deep relationship with the love interest could be a nice bonus.

However, I faced a problem: the art was made by the same artist as Loren, who unfortunately doesn’t work for me anymore (luckily I managed to ask him all the art for Loren sequel and several more NPC/character art before he left). So the only option was to find a replacement artist for these new CGs. I think she did a good job, even if she clearly draws females better than males. Sylrissa and Nuala extra CGs in particular looks very good, while I think for example Jasper’s could have been better.

I think overall I made the right call, since from the feedback I got, the vast majority of players didn’t mind to have a different art in exchange of more content for the game. I could have just written the scenes without art, but would have been worse in my opinion.

A different situation instead is when you only add more outfit/poses to existing characters, and that’s what I’m doing with Planet Stronghold 2. I’ve already posted in the social media some images of character with new outfits (like Damien finally in a proper uniform suit).

Haha the image above shows one of the most fun bugs (though for some it might be a feature…lol) that is using a wrong variable to set the outfit of a character! Anyway, the nice underwear Lisa is wearing is one of the many new outfits added by another artist to the existing characters. Also a bit harder to notice, but even Rebecca’s pose is new: the old characters only had one pose, holding his gun in one hand. This one with both her hands on her hips is a new one.

They’re small details and maybe not immediately noticeable (well apart in specific situations like above haha) but they all add variety and if you can find an artist who has a very similar  coloring style (like in this case) the result is always going to be worth it!

In an ideal world, you would first write all the story, and then commission the art. However, during my career so far, I found out that this is a risky approach if you want to be able to release at least a game a year. Artists can disappear, or take long time. So maybe you wait 1 year for the big 150,000+ words script to be finished. Then, once it’s done, you commission an artist, who can take another 6 months or more (depending on how much art is needed of course). As you can see while it can work, it will delay the release, instead of using the approach to produce the art in parallel or almost with the writing (even if this has other problems too).

And it’s not uncommon to find yourself adding more content to the game as you write/code it. It happened to me for example in my old game Spirited Heart, in which to be honest the different art styles shows clearly too much (it was one of my first games though…).

Personally I’m not sure what is the best method. Whenever I found a good artist I commissioned him/her a lot of art, and then adapted the story to the existing art (I had already a basic plot planned though). After all, that’s what we did with Loren and it has worked well it seems 🙂 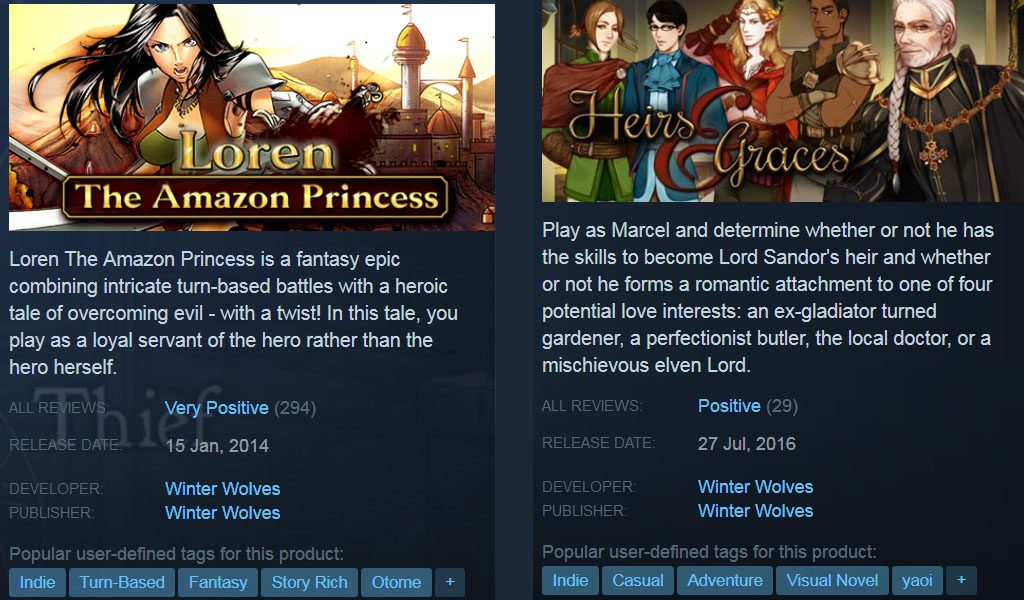 I want to talk about an aspect of indie development/business which is very often ignored, but in my opinion is important: the perceived vs real success of a game.

Recently I released two games, Cursed Lands and Love Bites. As always I got some positive reviews but also negative ones (it’s inevitable). Beside some obvious troll-reviews, one thing that always amuses me is when a player decides if a past game was successful or not depending on his/her own tastes or perceived success.

For example: I like sci-fi, so if you make a game that is not sci-fi, I could say “you should do another game like Bionic Heart which had really an original plot, was popular, etc etc”. If I like card games, I could say “instead of making a new RPG you should do another card game because clearly did better” and so on. Assuming results that are real only in the mind of the person who is writing it 😛

A popular game is not always the best selling one

This seems strange, but it happened to me in the past, and I also know of other indies who had the same experience. A game could be popular, meaning that has a big following, many people tried the demo, people and review sites talk about it, youtubers do let’s play, but… it’s not as successful as you might think. Maybe a smaller, hidden niche game has made definitely more money than the other, for a variety of reasons (game price, bundles, platform, time of release, piracy, luck).

I could make some examples with my own games: my game Bionic Heart was definitely more popular than Heileen (the first game of 2008). It appeared in some japanese sites, many bundles, has more Steam reviews…Yet, Heileen sold almost double its amount!

Another case is when a game, for some unknown reason (really, sometimes we developers have no clue ourselves!!) sells very well on a specific platform, that screws up perception. Loren did well both direct and on Steam. But if we exclude Steam and consider only direct and mobile, Roommates did better than Loren. So as you can see it’s really hard for the users to know how a game really did simply because only the developers have the whole picture.

Steam reviews are also very misleading, since people assume that a high rating means it’s a better game, or a game that sold more. It’s true in many cases, but also not true in many others. Personally I think that rating is high if the product meet people’s expectations. That’s why you see many short, super linear, but erotic VN with 90% positive: people know what it is, they buy it, they like it and leave a positive review. If you start to add gameplay, non linear plot (or, an ACTUAL PLOT haha), allow to choose the gender, have many romances, the score will decrease. It’s ironic but making simpler and shorter games will be rewarded much more on Steam (and that’s why most of other indies I know doing VN follows that system).

Also, back in 2014 or even earlier, releasing a game on Steam automatically meant a LOT of exposure. Right now things have changed completely. So a better game released now could perform much worse than an average game released back then. As you see, there are many things to consider.

The morale of this story is that if a developer says something like “from now on I’ll only make yuri games” (no, don’t worry it’s not my case…yet) there is a reason. Maybe that developer saw that the 90% of the top selling VN games on Steam are yuri, and this for sure had an impact when planning their new game(s).

Or if the public clearly want content of a specific type. It’s no secret at all that more sexy/erotic contents in VN does better. Like, a magnitude of order better. I think that nowadays if you make a VN that doesn’t at least have a sexy component, you could save your efforts (obviously exlcuding already famous indies) since it will be wasted time. Luckily, in this case I can solve it “simply” by having suggestive content on/off in options screen, so it’s not something drastic as deciding to have only a specific romance type.

Of course everyone has their own favorite games or themes, settings, romance types and it’s normal to support your own ideas, you should totally do it. But ultimately, since this is a business, the choices are made usually thinking about profit.

So far, I moderately ignored the “profit factor” when making games. Spending 10 months making SOTW RPG part, or all the time doing Amber’s crafting without a clue if was worth it or not (spoiler: it wasn’t). Making a yaoi only game (Heirs & Graces) when every dev I knew told me that was a bad idea (and from profit point of view, it definitely was!). Trying ot make BIG games with a lot of love interests and protagonist gender choice, when almost every other developer is making much more money doing MUCH shorter games with just one gender and less romances and erotic content.

All of these choices nowadays make little sense from a business point of view, but I honestly hope to be able to keep going like this thanks to the generosity of people supporting me in various ways, buying the games full price, being patrons on Patreon, leaving positive Steam reviews even if they’re not completely happy about the game, and so on.

We’ll see how it goes in future, but remember, very rarely the decisions of an indie (serious ones doing it for a living) are taken because of personal tastes or randomly. When players think of an indie as truly independent artist, I laugh. Maybe in the beginning we were, but right now if you don’t obey to the market’s laws you won’t stay in business for long.