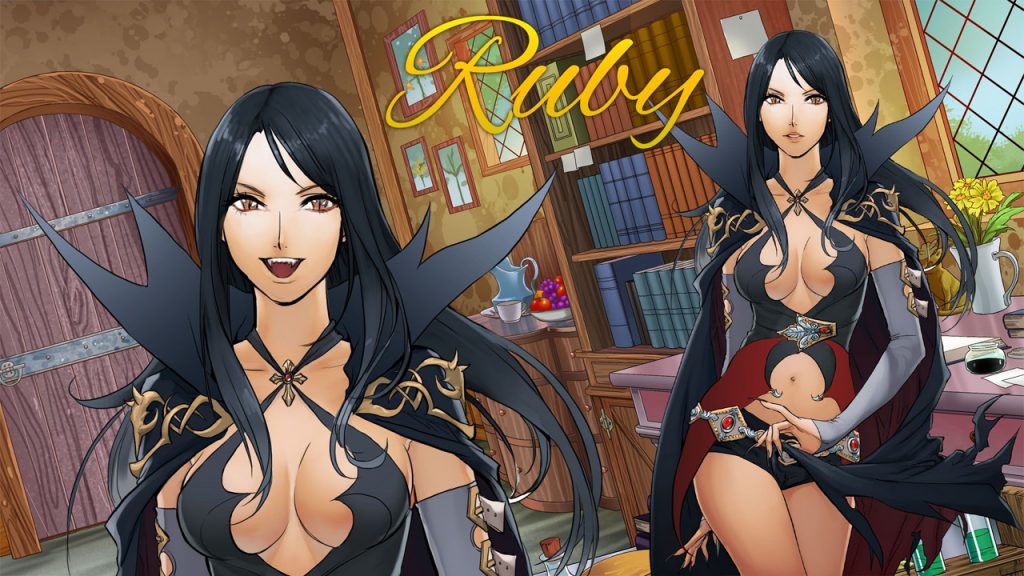 Time for one of my favorite characters (ahem and not just because she looks incredibly hot, I swear) of Amber: Ruby the vampire! Here’s the introduction:

Despite her age in human years, Ruby is regarded as extremely young for a vampire and still clings to her humanity because of that.

Despite these things, she and her brother are well respected in the small vampire community that live in Icesilia. Her word carries a lot of weight and she’s not afraid to use her influence to get what she wants. Outside of vampiric politics, Ruby finds herself fascinated by Amber and strikes up a friendship with her after a few chance encounters.

Over the years, she finds it harder to resist the urge to feed of mortals and so asks Amber to find a way to return her to human form. Such a request is not without its perils but she knows without a cure she will soon lose what humanity she has left.

Ruby is an extremely outgoing person who enjoys flirting with members of any sex. As a human, she was a dancer and she still shows signs of that in the way she moves and acts.

Despite her pretence of aloofness, she actually cares a great deal about those whom she calls friends and will do anything for them. Her fear of becoming as monstrous as the legends say drives her to avoid drinking blood and often only on animals when the need becomes overwhelming.

Animals barely sate the need, however, and she often turns to Amber to help her resist the true hunger for the warm blood of mortal men and women.

As you can see from her intro, she looks like an interesting character. Her endings are great, even the “dark ones” are somewhat cool 🙂