I can’t believe what I’m about to write but… I recently bought Temple Of Elemental Evil from GoG, and… I didn’t like it anymore! Yes, the game that back in 2003 was considered by my brother and I (at those times we used to play CRPG together, sharing thoughts and impressions) as “the ultimate RPG”, right now, 7 years later… sucks.

Why? I think is because I aged up, am working full-time, and in general I’m used to a more “casual” gameplay (even if the right term would be “less hardcore”, not really casual). Just as example, I liked Torchlight MUCH more… and that’s an action RPG.

What does this means? I asked myself. Probably several things:

Of course, not everyone will share the same thoughts as me. But I was a bit surprised to discover how much my gaming tastes have changed in just 7 years! And I can somehow understand why all the new titles are more action oriented, or have excellent GUI system that let you do most of the actions with very few clicks.

However, I think you can still have a good gameplay, rule system, and variety even using the good old turn-based or an hybrid approach like real-time with possibility of pause. A good example is Dragon Age, The Witcher and Drakensang. The last two in particular IMHO represent a very good example of “old-school approach” into a “new fashion” of CRPG. They have still many statistics, items, but the interface is not as clumsy as ToEE. They have lots of tactical challenges but still, you aren’t forced by a turn-based system.

Don’t get me wrong, ToEE is still a great title and I wish Troika Games would still be here today, I’m sure they would make a RPG that would kick Bioware’s ass 🙂 For my upcoming titles though, I think will try a more real-time approach, both for RPGs and also strategy/management games like the Heileen spin-off that I should start prototyping very soon. 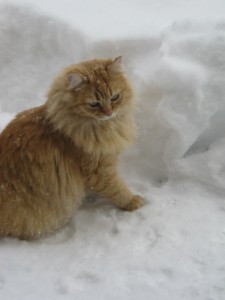 Gilda playing in the snow – she looks like a small fox. This is a photo from my archive. Thankfully didn’t snow so much today 🙂

Today I plan to finish the “Battle Arena” side quest in Planet Stronghold. I always loved arena battles, a series of consecutive fights of increasing difficulty. I mixed several robots, aliens, enemies that usually you don’t met in the game, and obtained interesting challenges (in many cases you’ll have to use psionics to win at hard difficulty level).

Yesterday I also finished adding all the achivements, there are 18 in total. They are all non-trivial ones. I hate when in some games you start playing, and suddenly you hear a jingle and a big text appears on screen “achievement unlocked! you pressed the mouse button for the first time!” 😀 I think they should be all somehow difficult to get. The easiest ones are the “killing ones”, like the RoboKill achievement that requires you to destroy 25 robot enemies in game. The hardest one probably is “Ultimate Hero” which involves never losing a fight in the whole game!

I was also thinking if I didn’t do too much for this game. For sure it’s going to be priced at $24.95 once is finished, but perhaps would have been a wiser choice to try first with a smaller story and see if my users like this kind of RPG/story hybrid. But anyway is too late to go back now! The good thing is that 80% of enemies are finished (including their statistics and special attacks) so really all that’s left is writing the story and design the various encounters and quests.

I am scared to say this but I think I might really met my self-imposed deadline of January 2011! 8)

Meanwhile I did some preliminary gameplay testing for my Heileen spin-off game idea. As I said it wouldn’t be a VN, but more like a story-based time management game (or strategy game maybe, since it involves thinking and not just clicking fast). I believe I might be able to price this one at $14.99 only since would be easier/faster enough to produce (but still quite fun I think).

Actually it’s not even a normal, regular bundle. But it’s a SuperBundle! ™ 8)

What’s in it? Well, there are the two Heileen games (two visual novels with over 80k words combined), Summer Session (a very fun and replayable dating sim) and Bionic Heart (a fully voiced dark-sexy-creepy sci-fi visual novel with 24 different endings). So as you can see, there’s a game for every taste!

What are you waiting? Go check the offer now!

Superbundles like that are said to be seen only once in a human lifetime. You should really take advantage of it now 😉

(Don’t worry, tomorrow I’ll make the usual friday cat blog and will get back to writing like a normal indie developer) 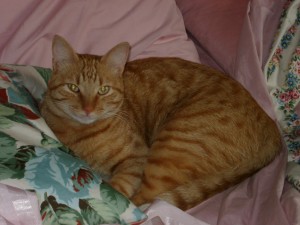 The red cat above is Miele (in italian Honey), our oldest cat (almost 9 years old!) relaxing on the bed.

Things are going pretty well with Planet Stronghold. Yesterday I made some big changes both in the Psionic Skills and in the level-up increase of HP/PP. This latest change was made because I used a cheat mode to raise my characters up to level 20 (which probably won’t even be possible to reach in the game, since I hope it does well enough so that I can do an add-on). Then I checked how they could be the characters at level 20, how many HP/PP they had, and I allocated all the Skill Points. The difference between the various classes wasn’t much noticeable! At level 20, playing at easy level, you get 20 x 5 skill points, so 100 skill points that increase each skill by 2. So in theory I could maximize any skill – a soldier could get to level 200 of Psionics for example!

While I like not to have too much restriction, I don’t want the class pick being totally useless. So I’m thinking to change the game so that some skills have a maximum cap based on your class. For example a Soldier could never get Psionics above a value of 50, and a Scout could never get Heavy Weapon skill above 50, and so on. I think it makes more sense to put some hard limits, so you can still create somehow “hybrid classes” but not change them completely!

The second big change I made is the Psionic Skills themselves. Right now, most were focused on two simple thing: Heal and Harm. Surely, doing damage, and healing HP are the basics for ANY RPG. However the gameplay would soon be repetitive, so I introduced new changes:

The changes above greatly improve the gameplay especially at HARD level. At easy level, doesn’t change much (I expect only those interested in the story to play at easy level!). But already at normal, and in particular hard level you can immediately see the difference. When before you could win a fight just by “raw force”, dealing damage and healing, now you can also win with cleverly used skills.

For example at hard level winning the training test if you are a psionic is really hard when you face Roboant-06 because of his Phasor Blast. Now with Fatigue you can slow down the amount of attack, or with Shock you can prevent him from attacking completely. The restore is also interesting because it works even at lower level (even if with high failure rate).

I also changed the concentration multiplier. Before the basic heal was 10 PP, the medium 20PP and the maximum 30PP. The problem is that already at low level you could heal for big amounts using 30PP. Now the concentration multiplier is: low 10PP, medium 30PP, high 50PP. This simple change makes possible to still use the first two at lower levels (below level 7-8) but to use the big healing you need to be able to spend 50PP (and this also prevents non Psionics classes from using strong Heal/Harm psionics).

Overall I’m quite satisfied. When before you would just use Psionics to Heal/Harm, now you can decide if to save their PP to use the new Psionic Skills that can really make hard battles easier if used correctly! 🙂

I’ve also implemented several minor changes suggested by “Iselwin” in my forums, like:

Overall was a pretty productive week! Next week will go on with the plot and try to have a version 0.8 live by end of the month with a lot of new stuff!

One of the first shareware games author, Thomas Warfield, had the habit to post pics of his cats every friday on his blog. I think is cool, so I’ll declare Friday the cats day for me as well! I’ll also post a status of all my active projects at same time so even non-cats lover can find something useful 🙂 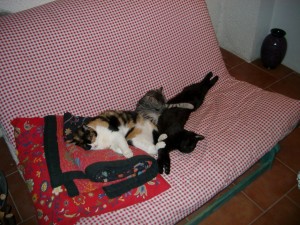 In the picture above, taken in my old home, you see from left to right: Fiore (which sadly left us before we could move), Grillo and Batman (yes, the black cat name is Batman for real!).

Planet Stronghold – currently writing the various romance subplots, and I also finished coding all the locations of the various races. Depending on which side you pick inside the game, you’ll have either to submit all the races, or reunite all of them under one alliance.

Remember Me – not much done code-wise, but arranged a deal to have a real song inside the game, which should feature the great actress/singer Cristina Vee. Also, lots of new chibi are being produced for the game, which will substitute text buttons for the choices you’ll be able to do in the game. You can easily describe this game with just one word: CUTE 😀

Love & Order – Christine Love is working on this one, and rumours says it should be ready before Christmas! I haven’t seen much of it myself, but what I saw is really good. The gameplay style will bring fresh air into the classic Dating Sims system.

Flower Shop: Winter In Fairbrook – is coming along nicely, even if we had some troubles with the BG artist (but we already found a new one). It could be ready around Christmas too but I don’t want to hurry things, so is more likely to be finished like the first episode around end of January 😉

Topsecret game about Heileen – I haven’t decided yet if to go on with this one. As I said, it wouldn’t be a VN though. Hint: Let’s just said that recently I replayed a lot some old Sid Meier’s games…

Topsecret 3d game – This could be a remake of an old game I did. It would be a full 3d game made in Unity3d (not by me of course, I can’t code 3d stuff!). If this becomes reality, probably will be my first game to end on Steam.