Today got a bunch of new art for the game. You can see some screens on this post. The first one is a group of natives you’ll meet on the island. They look really friendly, don’t they? 🙂 The second, is the gallery screen, where you can replay the endings you have unlocked (similarly to Bionic Heart). I really love the two Heileen Devil / Angel pictures. To be honest my favourite is the Devil one! 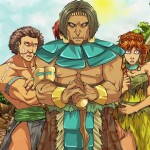 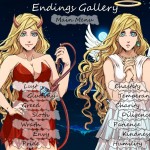 I have only a few more BGs to get and then the game will be completed, art-wise. However there are still many missing voices. I gave lot of thought about possibly releasing a sort of “pre-order” version, without voices: but talking with several friends (customers and other developers) they agreed that wouldn’t make much sense. People wouldn’t play the game again just to hear voices, so they would just have a lower-quality experience. This means that the game will probably be done in December though 🙁 So please remember this Christmas to ask  Heileen 2 as gift!

I remember when I was young, the game genres where very well defined: there were action games, adventure games, role playing games and so on.

As the game industry grew up, some interesting genre-mix started to pop up. For example now we all refer to Diablo as a RPG, but would be more accurate to call it Action-RPG. Actually, right now, we can find many “RPG elements” in lots of games. Very few “pure action” games remains.

One of my upcoming games, Planet Stronghold, is a “light-RPG” game. I consider it a visual novel with RPG elements, but stronger than those you can usually find in dating sims. What I exactly mean? I’m talking about quests, relationships, interactiveness? No, because many of those features were already present in my other “normal VNs”. In Heileen 1-2 there are quests, in Bionic Heart relationship and some interactive scenes, in Summer Session there are the stats/skills to improve and so on.

So to call the game “light-RPG” I knew I had to go forward and push renpy to its limits (well no, not really, is quite easy to achieve good results with it!). Indeed in Planet Stronghold there will be combat, an inventory, quests, character relationships and so on. There will be several kind of weapons based on the damage type: energy, piercing, explosive, etc. There will be 4 classes: psionic, soldier, guardian and scout, each one with special advantages.

BUT, the game won’t be FILLED by stats. You’ll clearly know from beginning what kind of gameplay you can expect from a certain class. Scouts will need lot of time to recharge but will be able to kill opponents with a single shot, especially human ones. Guardians will be tough and have lots of hitpoints, psionics duty instead will be to heal / protect others. That’s why I use the word “light”, because while is clearly a RPG game, it’s not hard to understand.

Clearly is not easy to create a game like that. Is actually harder than creating an uber-complex game like some I did in the past (Magic Stones or Supernova 2 for example). Because with this game, even a casual player should be able to pick up the game and after learning a few basics, being able to enjoy the game without getting lost not knowing what to do. 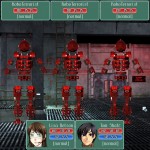 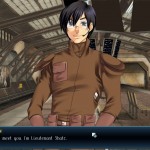 There aren’t many space RPG. There is fallout, but is more post-apocalyptic RPG than pure space RPG. I remember some good wargames like Space Hulk & Co. But really very few space RPGs. Especially Manga RPG (I’m talking about Pc/Mac platforms, not consoles).

So, I’ve decided to make one! The two screenshots you see in this page are from Planet Stronghold, my upcoming space RPG. Originally that game should have been another wargame, similar to Supernova 2. But after falling in love with Python I decided that doing a space RPG (with some VN elements of course!) could have been a more interesting game experience.

The player will control the adventures of Lisa Nelson, a young cadet just graduated from the Royal Army, that gets sent on the military outpost of Planet Stronghold to train. Of course, as soon as she arrives there, the situation will go out of control… 🙂

If you check at the bottom of this post you’ll see a sort of spreadsheet page (and indeed, it is!) and you’ll wonder what the … is that.

It’s my system to do perfect gameplay balancing! In games like RPGs, where you have lots of skills/stats, is really hard to balance properly games. There will always be some classes/races with better attributes than others. This is inevitable, but there are some tricks you can use to at least try to make a balanced game.

In what consists my method? simple, I take a spreadsheet program (Openoffice in my case) and I lay down the stats needed in row/columns like in the example below. Then, I use the SUM function to sum all values in rows/columns. The result should be that all totals are equals: it means that if I have a class with more Willpower, there will be another with more Wisdom, and so on. But in the end if you sum all values they should be all equals, grouped by your RPG system (in my case races/elements).

Hope I managed to express myself well. If you’re making a complex game, just try it, might save you some time! Of course there are still lots of things to balance inside the game itself but this should be a good start.

Yes, I’m playing around with 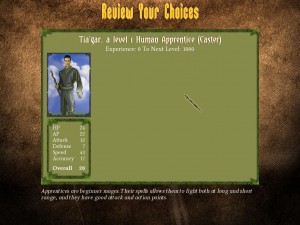 some ideas for another RPG / card game.

After almost 4 years have passed since I released Magic Stones, I felt the need to write another RPG between a VN and a dating sim 🙂 I have already my other project called Tower Of Destiny which is in full3d but that one will require lot of time (the engine is still to be finished).

For this one instead, using python, I think I could have a playable prototype in a week or so. I have already a bunch of card hand-drawn ready to use (no more 3d models this time!) and an interesting battle system and character development.

In practice you would control “Generals”, who have under their command several units. Each unit is a real character, which his own stats, inventory and skills (or special moves). There would be 3 basic archetypes: Melee, Magic and Missile unit.

The battle would be turn based like Magic Stones but in this one you actually have Action Points. So you can do several actions in your turn. Simple actions like changing your weapon or preparing a spell would require few AP, while other action like attack, swap positions or use items would require more AP. Using skills would also require AP. Differently from Magic Stones each unit could learn several Skills / Special Attacks. There would be a set of common skills between same archetype + some advanced skills. For example the Fighter is the basic Melee unit, and it would share several skills with the Mercenary. But the mercenary would have (at higher level) also skills like dual-wield, critical strike, and so on.

Then the game would consist on release 1.0 probably just in tournaments where you fight against other teams of characters. I plan to have the initial game out at a very interesting price like $9.99 and then release several add-on pack each one priced at $9.99 but with lot of content.

Anyway, all of this is just a plan. From now to the point where the game is finished it could become anything including a online-only game 😀