Originally I wanted to wait a bit more before announcing it, but then I got new images so nice that was a pity to not share them with my followers on the various social networks and so… I cannot be silent anymore, I must speak!

I’m proud to announce a new fantasy roleplay game called “Seasons Of The Wolf”, which hopefully will be released this Fall, or at worst next Christmas.

As I wrote in previous blog posts, the work on Planet Stronghold: Warzone (the sequel) is still going on fine, but it has become a bigger game, and the new battle system still needs to be coded and tested. So while I assure you that it will be out, I decided to start this new RPG to give something to play sooner to my roleplay fans! 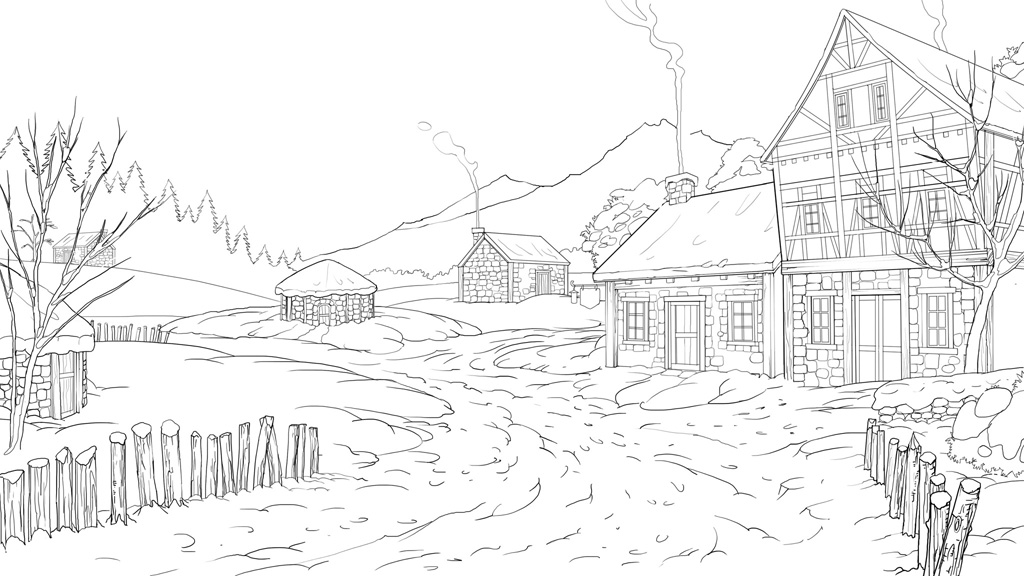 A black/white sketch of Ninim

The game starts in Ninim, a village in the Northern region of Aravorn (the fantasy world where Loren and other games of mine take place). It’s a cold, freezing land, where snow and ice are present most time of the year. It’s inhabited by snow elves, elves that have white/light gray hairs and eyes, and are very skilled Rangers, Hunters or Druids (the three playable classes as main character).

There two siblings, Althea & Shea are living together with their father Morran, who raised them when their mother went missing years ago. They live a frugal life, trying to earn some money and food through hunting.

One day, one of the two siblings (will vary depending who you choose to play) finds a wolf puppy and decides to take care of her. But this decision will lead to a disastrous chain of events later in the game…

Obviously, this game won’t be as big as Loren. There will be one romance for each sexual preference, and the story will be overall shorter. The party also will have less members, 8 characters in total. The battles system is a modified version from Loren’s one. It will still be 6 vs 6, but the layout will change from top/down to left to right, also showing the characters waist-up.

This is possible because the game will use the new resolution of 1280×720 pixels, allowing more space for bigger sprites, more menu/icons and so on. It will also be designed from start to be playable on touch devices (will probably be available for Android some months after it’s out for desktops).

The game will span into the four seasons (that’s why it’s called Seasons Of The Wolf) and the party will have to travel also to far away lands, so it won’t take place only in the frozen Northern Wastelands.

I’ll reveal the various characters of the game in the coming weeks. I can say that there’s a good variety, and some interesting classes to play, like Jariel, the Bard! 🙂 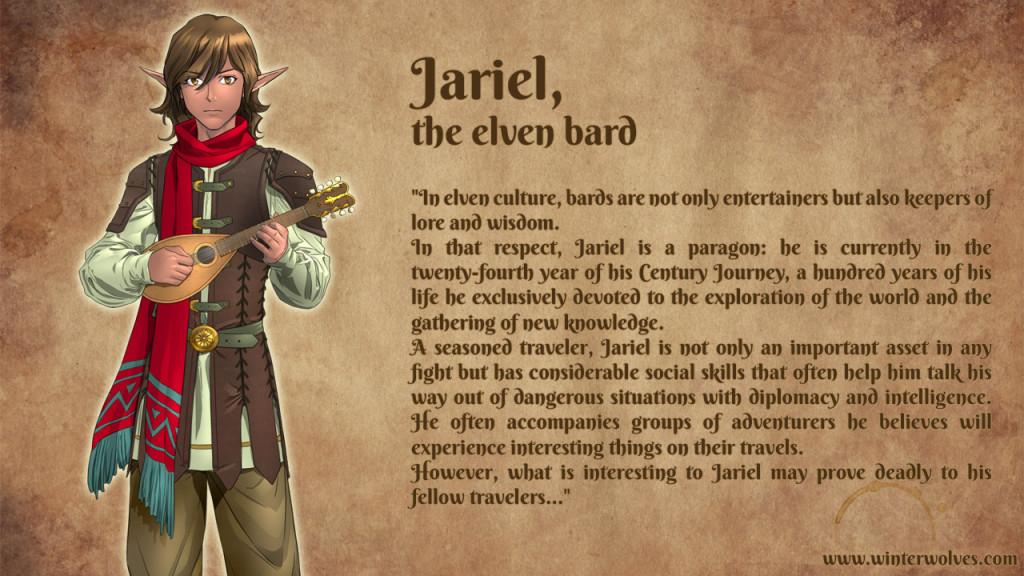 Of course there are also eccentric characters like Rowinda, the Warlock: 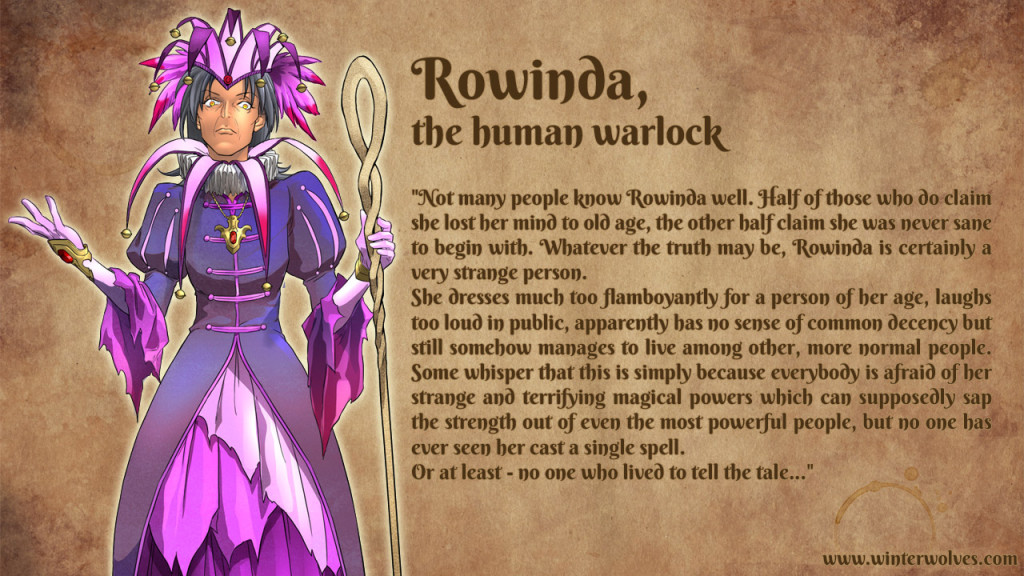 Unfortunately, Rowinda doesn’t want to date anybody! She’s too busy being craaazY!

Each character has several different outfits, and there will be several CG scenes (both romance related and not) through the story.

For those who can’t wait, I am posting the characters sheets more quickly in my twitter, tumblr, facebook and in my forums 😉

Technically today 21st June Summer starts, but here in Europe things are getting hotter since one week at least. Every year during this period I struggle to work, and this year is no exception. I thought that going living at 800m on sea level would have been enough but apparently I was wrong…

Anyway, at least I still manage to work hard in the morning. Check the video below:

Nicole’s first encounter with Ted. I chose the wrong choice on purpose since is more funny

I’m working on Ted’s route right now, and then there’s only Jeff to finish the otome version! Of course, some things are still missing, but maybe I’m not behind as I thought 😉

Spoke with the writer and the coder, things are progressing well. As for the new RPG framework, things are a bit on hiatus now but coder said that everything should be ready this September. Which means that meanwhile writer can go on with the story, so in September I could be able to start adding/design the items/encounters/enemies and have a beta shortly after. IN THEORY, of course! 🙂

I am voluntarily not saying much about that game yet even if development has already started since several weeks. I want to have at least all the characters artwork done before starting to talk about it. Writing is going well, and I think it could be finished by this Fall. Then of courseI’ll have to code all the encounters and do the testing…

Crossing fingers, it means that this Fall I should be able to work on at least one of the two RPGs above! If that happens, I’m confident that I’ll manage to release at least a new one before the end of year, and maybe the other a few months after,so RPG fans will finally be able to play new stuff after a long wait (in the last two years I always managed to release at least a game a year).

While I haven’t abandoned completely the idea of getting my games on iOS, for sure that won’t happen soon (and  for sure I won’t waste anymore of my personal time trying to submit, I had enough!).

On the Android front, I’ve started porting Loren as you can see from the video below:

Unfortunately there’s still some work to do (though that video is old, the character selection already works now for example). I’ve also “donated a Fire Kindle HD to the cause”, so that the Ren’Py coder can investigate the problems publishing on the Amazon store (and fix other generic Android bugs as well).

Stay tuned for more info coming in the next weeks!

is nice isn’t it eh? 🙂 This game will have a lot more gameplay element than the previous RPGs, and judging by people’s reactions they like the idea.

The colony sim, as you can see, will have a lot of variety of building and resources. While we haven’t fully tested the gameplay yet (since it’s integrated into the main game story, it needs to be written first) it evolved quite a lot from a “simple minigame” to a very detailed colony building simulation.

Similarly, Aleema started small with the isometric exploration minimap but then new ideas popped out of our minds and voilà… 😉 Is not Diablo 3, but is quite an evolution from the first game top-down exploration map! There will be several devices on each map that will give you bonus (like the Healing Pylon of the video) and you’ll be able to interact with some objects/doors/items, see the enemy encounters (showing only one type of enemy, but the number of sides of the polygon determine the battle difficulty) and so on.

The isometric view is really nice and I’m thinking if to use it also in future games. Maybe even for the battle itself, allowing more space to move and also giving the possibility to have some “epic battles”, for example the party of 4 vs 15 enemies, like some people are asking.

In any case, this will happen in the next RPGs – Planet Stronghold: Warzone will still use the same first person view in the battle (albeit with a fresh new interface/GUI).

Use the coupon JUNEBUG to get a 50% discount. Note that if you want to buy both Flower Shop games you need to purchase them separately, otherwise you’ll get only the automatic 15% discount (sorry about this but is a limitation of the shopping cart).

In the video above, Nicole’s first encounter with Kurt Madry

First of all the game has a brand new GUI: 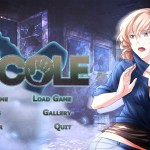 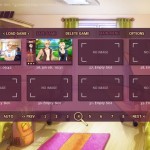 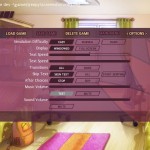 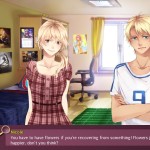 I’m quite happy about it. You can see the main menu, load/save and options screen, and a in-game screenshot. By the way about the last screenshot, I’m sure Natalie from Winter In Faibrook would agree with Nicole, about what she says 😉

Yesterday I just finished coding Kurt’s route, and writer said should send me Ted shortly. There’s only Jeff left to write. However I don’t want to say anything I could regret later… so for now the estimate release date is still mid-July, for several reasons:

So, still a lots of stuff to do, and probably will delay the game release, but I think in the end will be worth the wait!