I did more experiments on the view of the game, I’m happy about the classic first person view, a la Dungeon Master, even if of course the gfx efforts will be more than a simple 2d topdown/isometric view.
Call me nostalgic but I really want to recreate the atmosphere of those old classic, and keeping that visual feeling will be essential.
I’m still thinking about the classes. I want to innovate a bit, but at same time don’t want to push it too hard…since I still need to sell a decent amount to live, I don’t want to revolution the roleplaying genreÂ yet 😉
Anyway you can be assured that you won’t find only similar spells to the classic AD&D spells “magic missile” or “fireball”. I want to make also some original spells, for all the casting classes in the game, which right now are Druid, Wizard, Sorcerer and Healer.
Also I’m thinking about the use of the other attributes like Knowledge, Wisdom and Intelligence for non casting classes, and viceversa. They’ll have some impact for sure, but of course not as the main ones.
Knowledge could influence how many new moves a fighter can learn per level, for example. Still would be hard to find another use also for Wisdom and Intelligence. Also, in this case would mean people could make a fighter with average skills and be better than a big tougher one? sure, intelligence plays an important role in fights, but if a small fighter can overcome a big strong one, is mostly thanks to the quickness, agility, rather than pure intelligence. I think is more the instinct, reflexes that guides a fighter in the frenzy moments of a close range fight…!
Nonetheless I’ll try to find a proper use for all the attribute, for all classes. But fighters will be more influenced from the fighting attributes, and casters will be influenced more from the casting attributes. 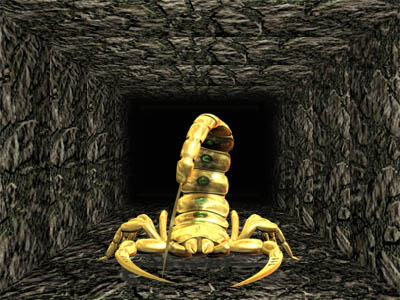 Ok this is my first Photoshop mockup… isn’t in-game screenshot yet. I just composed the image with the different “depth layers” I was talking before, and put one of the monsters I have already rendered, a big one, the Golden Giant Scorpion! fear! 😀

I’m pleased about the result. There’s also a small animation for each monster, nothing fancy otherwise the game would take too much time, but I think that already the still image looks cool. At least for me 🙂

LOL ok the post title is a bit crazy… but I got that suggestion recently from my forums that says:

I have another suggestion though: what about a serie of “mercenaries” or heroes ? like in suikoden games. You have a finite number of character to explore the dungeon, so anytime you go back to your home village you can rebuild your party.
That opens the game to new strategies. For example one level there could be some really tough long-range fighting monsters, so you should make your party only with long-range classes like rangers or spellcasters.Â

Well I must admit, that isn’t a bad suggestion at all. How many times you’ve started again the whole process of “Character Creation” in party-based RPGs because you thought “hmm no this class/races combo doesn’t fit my tastes/playing style, so I’m going to try again with different choices”.

This method would be very good to solve this “problem” and also be quite innovative. I am thinking to implement it this way: you have a number of characters to choose/create when you start a new game, like 20 or even more. Then you can pick 6 characters from those 20 and go adventure in a tower level. You can then come back and maybe replace some characters. Of course they all start with zero XP, and those who stays “at home” don’t get XP. Maybe you can train them in something, but have to test well this aspect, because I don’t want the heroes staying at home to get more powerful than the one adventuring and killing monsters on the field!!!

Anyway, is a very good idea and I’m surely going to implement it somehow in the game!

I really want to make hard to level in my game. I always hated the japanese RPG in whose you level every 5 seconds of the game… ! 🙂 I prefer the AD&D approach in which each level is a hard conquest. It makes it more important, like you achieved really something worthwhile and not just “another of those 150 levels” 😀

I’ll treat skills and levels differently though. Leveling won’t mean you can raise your edge weapon skills. A young level 1 fighter could reach 100 in edge w. skill for example, but would have less HP and know less special attack. So it would hit more often with swords, but would take less hits to kill him (since has fewer HP) and he wouldn’t know some really special attacks that I’m defining right now (some with damage over time effect for example).

Of course reaching 100 in any skill would be a rather hard task. So while in theory it could be possible, in practice would be better balanced. More likely for example to have 2 fighter with:

Fighter level 3 – 20 edge w. skill – 32 HP and extra attack moves that would make him a tougher opponent in battle

I plan to implement this system even for casting classes.

As someone suggested in my forums, perhaps is better if I have fewer classes to start with, but more difference between each other, more unique. He also suggested as example the fact that in many RPGs the Paladin is just a warrior/cleric hybrid, while it could have more unique particularities.
So probably Iâ€™m going to look back at the classes and reduce the number from 12 to a more reasonable amount like 8, but each one having a unique gameplay.
Iâ€™m thinking about those main characters archetypes:
Offensive Fighter – fighter with high damage value, but few hitpoints/defense. Usually those are also long-range fighters since they canâ€™t stand much hits on close combat (thinking about Rogue or Warrior)
Defensive Fighter – fighter with high hitpoint/defense but normal damage (Ranger and Paladin)
Offensive Caster – caster specialized in doing big damage fast (Wizard)
Defensive Caster – caster specialized in buffing party and casting defensive spells (Druid)
Healer – caster specialized only in healing (Healer)
Enchanter – caster specialized in charming or stunning the enemies (Sorcerer)

It is a scheme used already in many MMORPG, like Everquest or Dark Ages Of Camelot, but I think that nowadays is one of the best system. Even AD&D third edition is heading toward those set of rules.
So Iâ€™m thinking to reduce the classes to those 8, eliminating the Mercenary, Monk, Adventurer and Bard. That means only that in TOD wonâ€™t be present, but this doesnâ€™t exclude future updates featuring new classess 😉

Itâ€™s better to start with fewer classes indeed, but maximize the gameplay for each one of them, rather than put lot of class but without much variation.
Also since I want to allow at least leveling up to 10 for each class, and I want to add new spells/special skills for each new level, it is already 80 different levels to think about! Definitely yes, is better to start small and expand the game later.

Yesterday I made some experiment with the fake 3d view of the game. I never thought that making it would be so difficult! In practice I have to render as many layers as the depth of view is. For example if I want the party to be able to see up to 3 cells in any direction, I must render 3 layers of view, scaling the picture down to create the illusion of distance. Not an easy task at all, need to make more experiments with it.