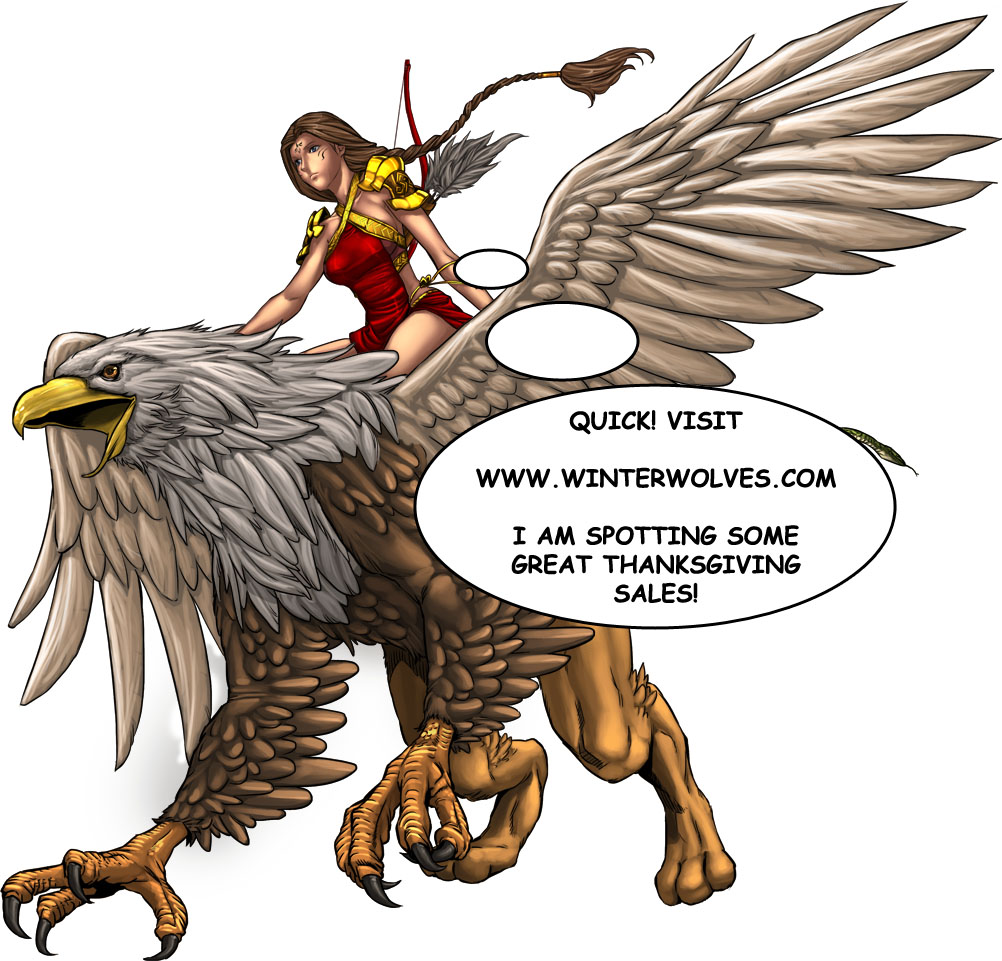 You better do as my character Breza (from Loren Amazon Princess) says and visit my website now! 😉

I’m doing a Thanksgiving sale, that’s why I’m doing the Friday blog post today, one day earlier. All my games are 50% off until Sunday 1st December (included). The only exception is Nicole, because it was released just a month ago, so that title is 30% off instead.

Differently from previous sales, you don’t need to enter any coupon codes – the discount is automatic.

Please note that the discount is displayed after you add the product(s) to the shopping cart!

If you buy the bundles like Flower Shop or Heileen, remember that there’s a default discount that can’t be bypassed. So the only solution in that case is to buy the games separately, sorry about that!

What are you waiting for? Check out my website: http://www.winterwolves.com and browse the game catalog, I’m sure you’ll find something that suits your tastes 🙂

That’s the only update this week – as some of your know, my situation at home is a bit messy right now for a pet emergency so I didn’t have time to write a proper blog update. But at least I’ve managed to do the sale 😉

Let’s get back to talk about one of my favorite topics, rules/game design for RPGs 😉
One of the biggest problems of all RPG designers is balancing the game difficulty and making the battles/random encounters interesting.

In my first two RPGs, Loren and Planet Stronghold, I used two similar approaches. The enemies would auto-level, but on a different scale from the player’s party, to make sure that as the player leveled up the battles would become easier.

I had defined a base enemy stats/skills values set at level 1. Then I decided how much increase they would get for each stat on every level up, and did some testing, making sure that the enemy progression wasn’t as quick/fast as the players.

For example, after 10 levels, the enemy could have gained +10 HP while the player (on average) +20HP. And then I was scaling those values based on the chosen difficulty.

However, it was very painful to code it, because I had to define every single enemy this way. Copy/paste helped, but when an enemy definition looks like this:

it’s not really the best to avoid mistakes 😀 Also, balancing the game required tweaking the numbers over and over, test again, and overall took a lot of time.

So what I have decided to do, to shorten development time and make at same time the battles fun and challenging?

I’m going to use a different system that combines auto-leveling with keywords-based allocation of enemies’ stats.

By default, the enemy will scale completely to the average values of the player party. So attack/defense/speed/magic, so that we have a 1:1 copy of the character average party members values. Then I’ll use keywords and/or relative values to define specific trait of each enemy to differentiate them.

For example I could write using relative values:

and so on, you get the idea! Also, the keywords will be parsed in sequence, so I could apply two or more and the final result would be a mix of the various modifier.

I think this system could lead to a MUCH faster development time, and also to a more fun/challenging battles, even to a better randomization of the enemies (for example in a region of Fire creatures, I could define the Flaming attribute that gives +25% Fire resistance).

Of course, this doesn’t mean that all the enemies are of SAME LEVEL. Only that the default/base level now matches the average party level. So while before I was struggling trying to have enemies match the party level, now I use that as starting point to create the opponents! But I can have in battles weaker or stronger enemies.

I’m going to use a system very popular in MMORPG, using color codes: 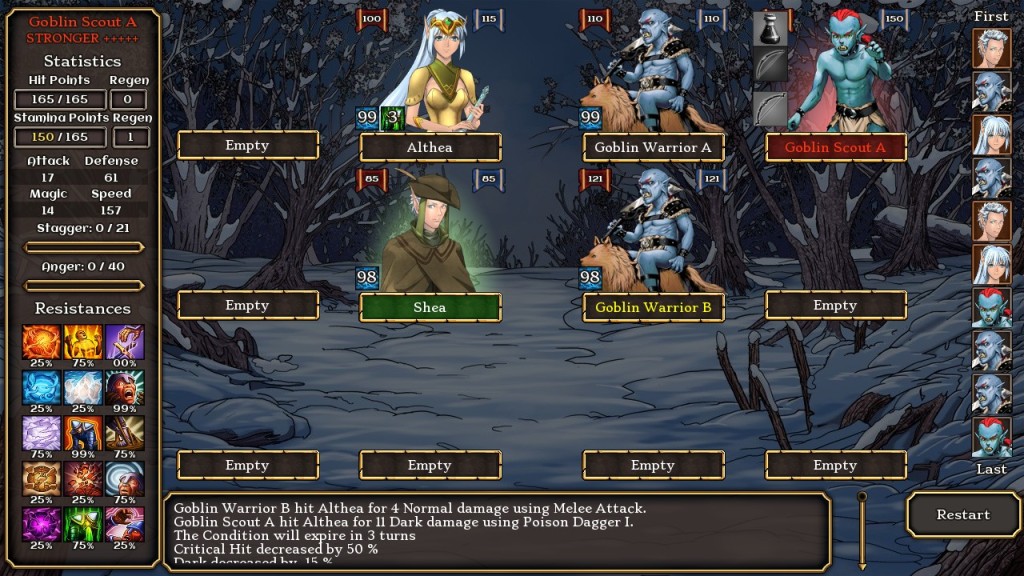 The color coding system, so you immediately know how dangerous each enemy is

Green – weaker than your current party average
White – same level
Yellow – one level above your party averageOrange – two levels above
Red – more than two levels (it could be even 5 levels, like in the screenshot above)

Those who like to grind will still be able to do it, because I can always define groups of low-level enemies, and they’ll still be easy to defeat. The items you’ll find can be sold to buy better gears, especially useful for those mad enough to play at the “Nightmare” difficulty level 😀

As you can see, I’m going to experiment quite a lot with this RPG! So far has been fun and the result are very pleasing (though as always I’ll need to wait for the feedback from testers). 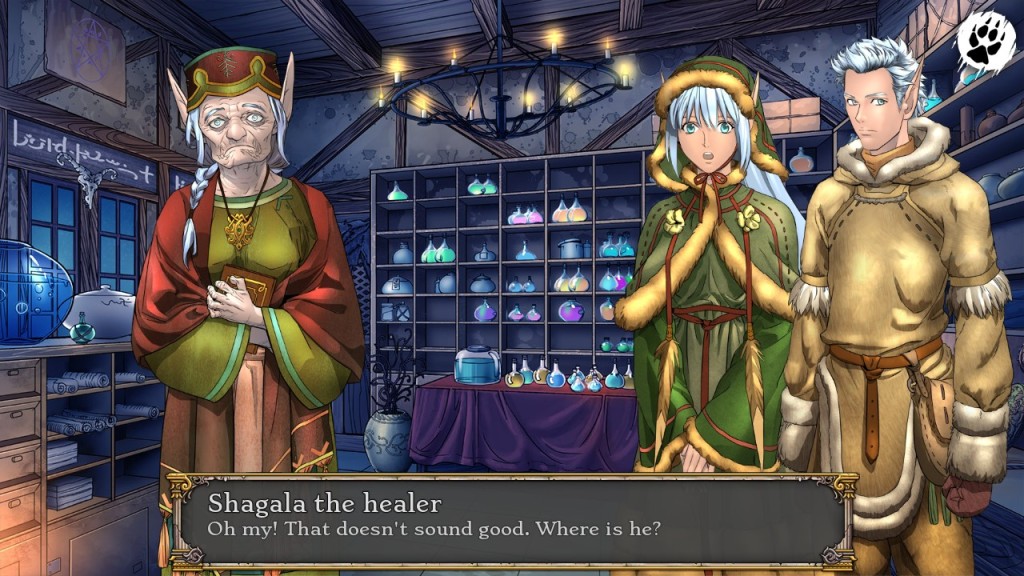 Shagala the healer in her shop by night. The candle lights are all animated 🙂

Sorry about the blog post title, I just got the battle voices for Seasons Of The Wolf and I’m a bit excited! Ayu (my trusted VA manager) has always done a good job (she did the voices for past RPGs as well) but quality keeps getting better and better.

Just check for yourselves (for Althea/Shea I just put two samples but there are many since each class has different ones):

In other news, I got new “covered version” of Loren romances so once I finish the new update, even those playing in the covered version will be able to enjoy the romance images (some will still be sexy despite the characters fully dressed!).

From my site you’ll get the “full deal”, with covered/uncovered images. On Steam and other portals is more likely that I’ll make only the covered version available, to avoid getting any age rating / limited exposure (but I’ll try to have same version there too if possible!).

Today’s blog post will be a bit particular. I don’t have many news about my games, so for a change I thought to let you know where YOUR money goes. When you buy one of my games, what I do with the money?

Of course, I spend it all to buy fast cars and expensive luxury vacations! 😀

No, not really. Check the images below to get an idea: 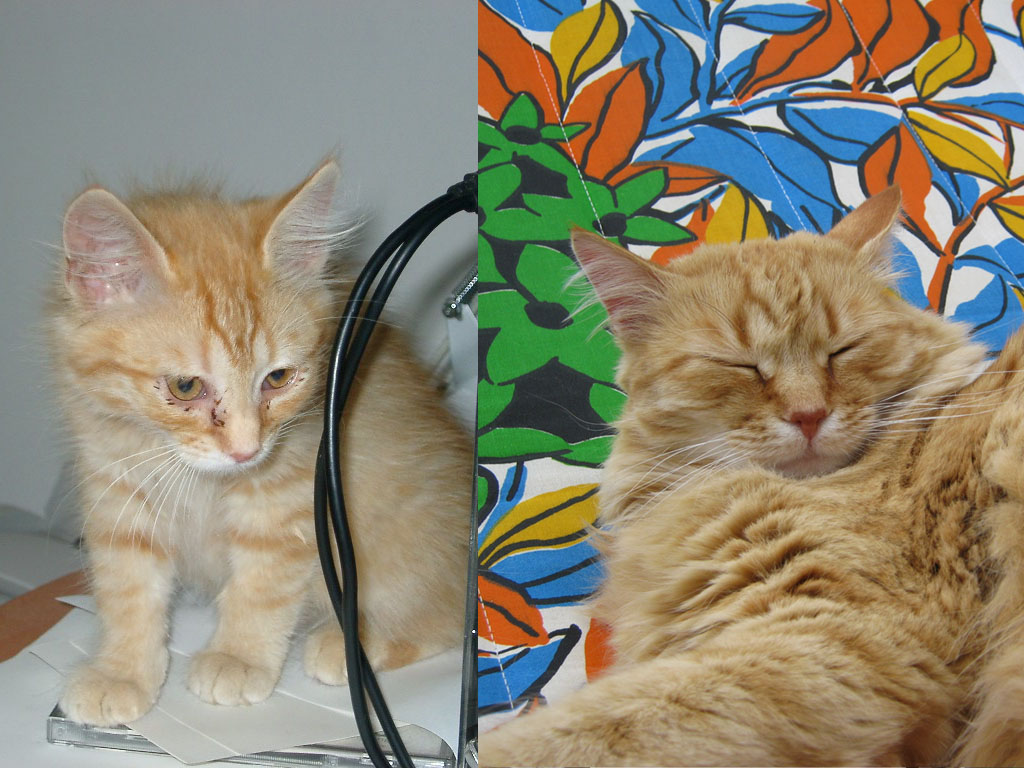 Gilda when we found her on the left, and today on the right. Quite a change! 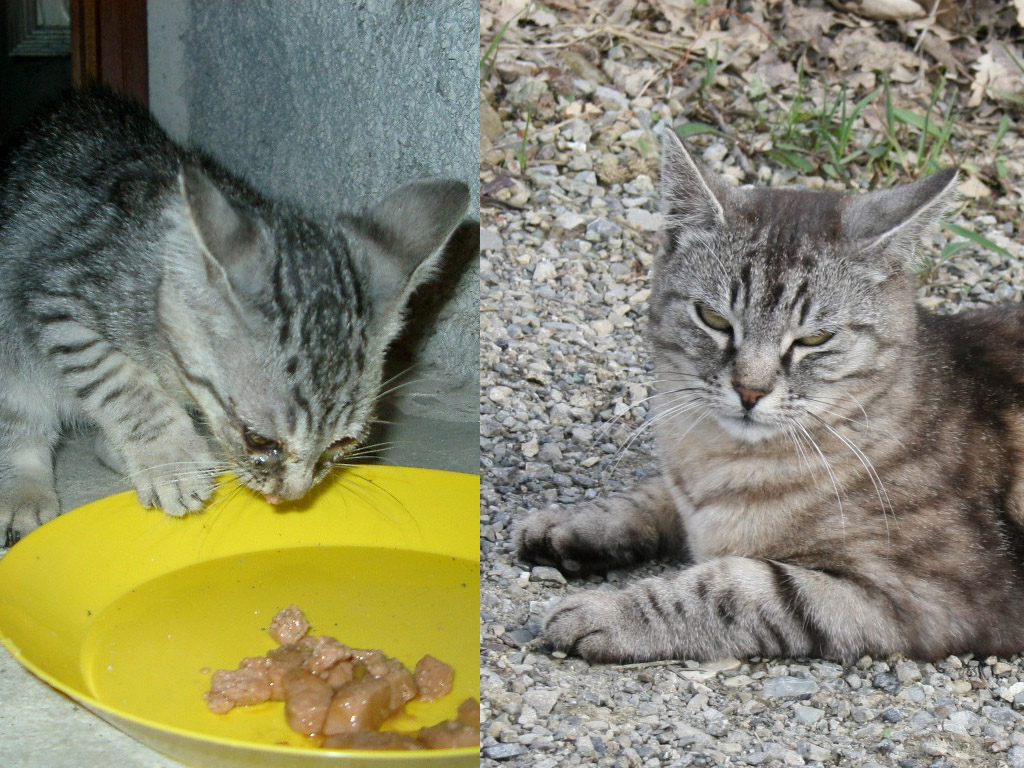 Grillo was literally starving. On the left his first meal, on the right how he is today 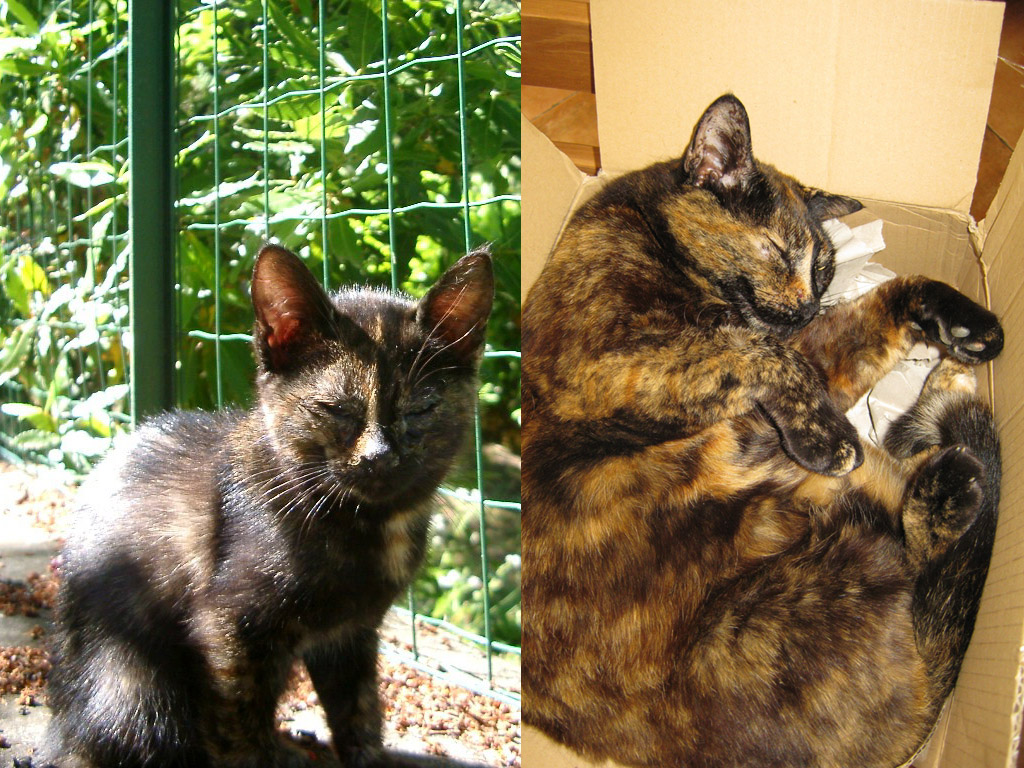 Nina is my favorite cats. On the left, she was very sick when was a kitten. On the right, she recovered well!

Yes, I saved many stray cats (and a few dogs from dog shelters) from a sure death, even if in recent years I had to slow down… I have 11 already and is starting to become a bit hard to manage them all and at same time get some work done!! 🙂

Before you think “he’s one of those crazy animal-rights activist who only help animals”, check my Kiva (a popular charity website) lender profile:

As you can see, I do something also for two-legged animals! I donate to other various charities but I don’t want to make this post too long about myself in particular.

Why I felt the need to talk about this topic? I don’t consider myself a special person, and of course I don’t spend all the money I earn on charity (I need to live and pay people that work for me too!). I did it simply because I think is customers’ right to know how the companies spend the money they earn. Be it big or small, composed by 10000 employees or just one, I think is important to show the people what you use their money for.

I know that for most people the only important thing is the final product. Company A makes a product I want, and I buy it because I like it. It’s fine, I have nothing against this. But what if Company A treats employees badly? or uses money to buy patents to force other smaller companies out of business? or does other bad practices?

I believe the users should ask themselves those questions. I also think customers have a big power, they can influence the companies. They can tell them “what you’re doing is wrong” and that won’t buy their products anymore unless they change. Being transparent about how you use their money, trying to make ethical decisions whenever possible for your employees, the environment, animals and people is not a secondary thing in a world that sadly seems only ruled by “let’s make more profit!”.

OK before I turn into one of those self-motivational gurus, I’ll stop here. Don’t worry, from next week I’ll be back talking about the games 🙂 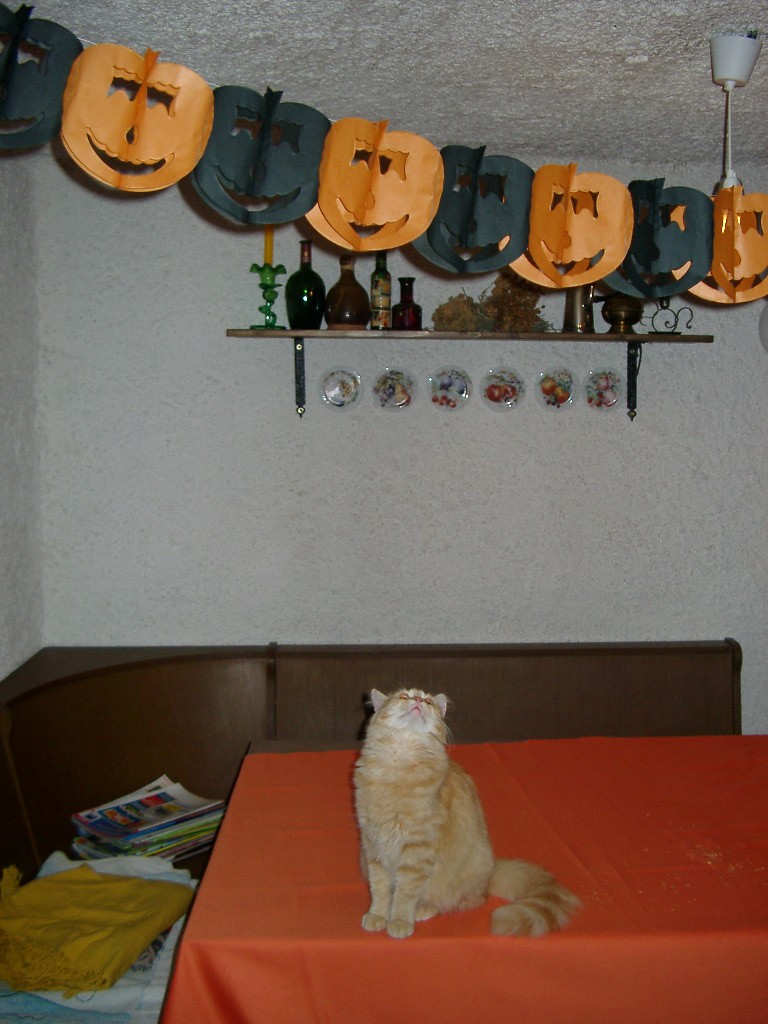 Happy Halloween to everyone! This was an incredible week for me.

First of all, Nicole is officially out (but you probably already know this). In any case, I just want to remember that you can grab the free demo here: http://www.winterwolves.com/nicole.htm

But the real news was the approval (finally!) of my RPG Loren The Amazon Princess on Steam! 😀 it was a bit shocking to be honest: not because I wasn’t expecting it, at the pace they’re greenlighting new games I knew it would eventually get in, but I thought it would need more time.

Anyway what does this means? my life is changed? I’m going to retire? Nope.

Steam gives a very big exposure but I’m an old indie (ahem) and I know well that you must not get too big expectations, and that if your game doesn’t match Steam audience you might not even earn that much. In other words if the game is good, will probably do well, but there are a thousands other factors that can influence the outcome.

Here comes my decision to take it easier and wait to release it. From now until Christmas will be an insane rush to release new games, top AAA titles, and so on. The biggest amount of money you make on Steam (as well on any other platform, including your own site) is at launch. So if I launch the game together with 3-4 new titles, and maybe one of them is a big AAA title, and then a week later there’s the Thanksgiving/Christmas sale, it could pretty much screw up everything.

Also, I want to polish the game a bit: I’m redoing the soundtrack to have only custom music, will put the latest version there, I want to include achievements and possibly use the DLC system for the N’Mar expansion.

So as you can imagine is a lot of work to do, since I need to learn everything from scratch and the last thing I want is to rush things!

Ah before I forget: I’ll also add a “censored version” for all the romances. So the game available on Steam will be playable by everyone and not require any age ratings. I was forced to take this decision because getting an official rating (ESRB, PEGI) is out of discussion for a small indie like me (too expensive, too much paperwork). The best way will be to buy the game from my site so you know you can play the “naughty version” if you want, and still get a free steam CD-key 😉

In short, Loren will be on Steam but very likely after Christmas, since I think that is the best for my game 🙂 Meanwhile, maybe some other titles will get in… both Planet Stronghold and Spirited Heart are close to the top100, so you might go and vote for those games as well:

Next week, will talk about the Roommates and SOTW status/progresses… stay tuned! 😉