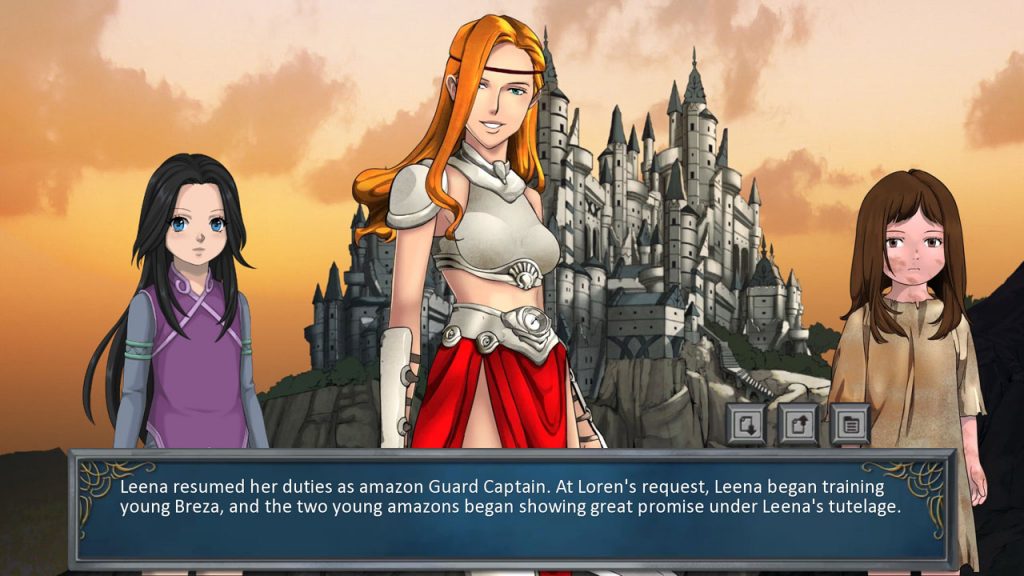 One of the many endings / epilogues of the game. This one is not a big spoiler since we know already about Loren and Breza from Loren first game!

As promised, here is the postmortem of my latest RPG Cursed Lands. The game was released in May this year after about 3 years of development. Personally I was involved in coding and writing it from past year, starting around April/May until May this year, so I spent about one year of work on it (not always full time though, since February to May was mostly bugfixing).

For the gameplay, I reused my RPG engine with the changes done for Queen Of Thieves, of which the biggest were:

but at the same time I also introduced several new gameplay elements:

– “first person view” with the possibility to have bigger enemy sprites and monsters of varying sizes
– the social talent system with a series of new things like enemies attacking each other, fleeing battle, giving items to player
– the deteriorating defense system, so that over time the defense would go down as target takes hits, to avoid the battles dragging out too long
– skill checks outside the battle
– items with associated skills (like a magic book casting a spell, usable even by non magic users)

now I admit that some changes were mostly cosmetic, like the “first person view” of the combat, but I think it looks really better than before. In a way it’s like my first RPG Planet Stronghold in which you could see the enemies fully, and not just portraits. I know that some people disliked it (not this change in particular but the removal of front/back rows).

I agree that from the tactical point of view removing the front/back row is a step down, and I will probably re-introduce it in Loren 2. I’ll also try at same time to have a nice visual, so perhaps still “first person view” like in Cursed Lands, but with the enemies placed in a front/back row, and the party as well. The screen will be a bit crowded though 😉 Anyway, there’s time to think about this.

– a plot of over 300,000 words with a lot of branching paths
– character creation system with over 1 million possible combos
– over 100 unique item designs (not 500 as I erroneously posted on twitter a while ago)
– if we consider color variations, over 250 different items (this means I reused same icon design but tweaked the colors to create a new item)
– a soundtrack of 21 tracks + theme song
– 5 love interests for each gender (though 4 bisex characters, the nagas, Nuala and Vaeril)

it is hands down the biggest game I’ve ever made: biggest story, soundtrack, items. SOTW has more combat and enemy variants, while Loren had more love interests, but overall this one was the biggest.

Bigger is not always better

That’s what they say, right? Well, in this case of course some people liked it a lot, others were neutral, and another group disliked it. But they are just people’s opinions, what interests me mostly are the hard facts, the statistics/figures, so let’s see some numbers:

I don’t think comparing it to Loren is fair though, since those were really different times. Indeed Loren sold about the same amount each month for longer, while nowadays after the launch month, it’s really rare for a full price game to keep selling the same amount for many consecutive months.

Anyway, I am personally satisfied of the job I’ve done with the help of the various collaborators and I’d like to think that maybe one day I’ll be remembered by the RPGs gameplay and not just by nice art/sexy contents. 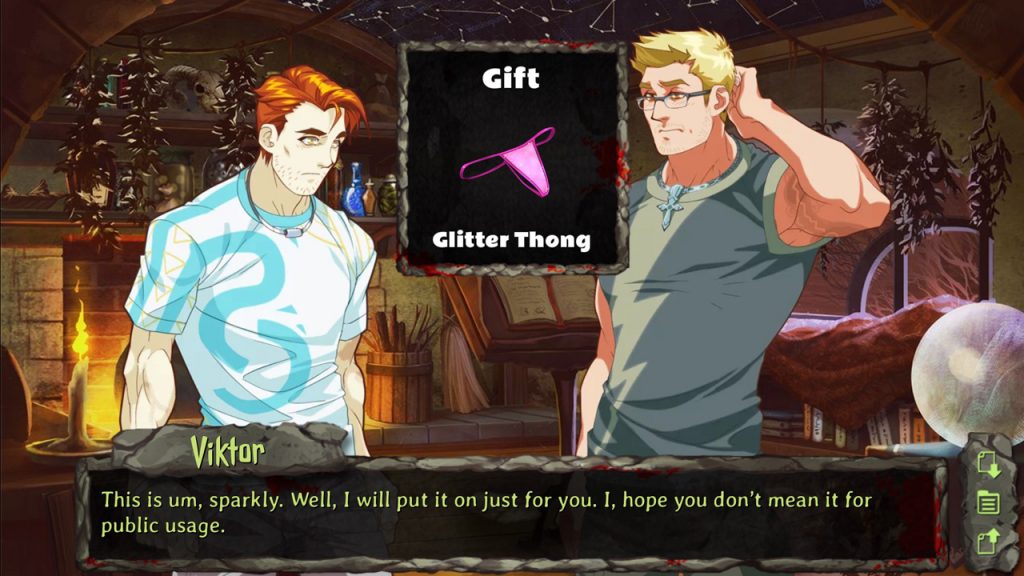 Only a few months have passed since Love Bites’ release but I can already draw some conclusions about it. I’m planning to do a postmortem also for Cursed Lands later this year.

As I posted already when I announced the game official release, the whole development experience went really smooth. I already knew about the work ethics of both Miakoda (the writer) and Rebecca (the main artist), but considering they both had some serious real-life issues along the road, it’s even more amazing. But everyone involved did a good job, from Matthew (the musician) to Aleema who did the GUI and trailer, the person who scripted it, etc.

When such things happens, a game gets released in a reasonable time-frame. Yes, I know that since the announcement (February 2016) to official release (May 2018) there are two years, but honestly it’s not such a long time to produce a quality game of a good size like this one, in which you can play as male or female (Nicole took more or less same amount and you can play only as female for example).

This was also a new choice for me, and thinking back, I should have done this sooner. In practice I already saw many complaints for some of my past games (Nicole, Roommates) in which several players didn’t really enjoy the stat-raising part, despite being a classic of dating sims. However, reading all the feedback, it seemed clear that for the vast majority of players, not only it wasn’t a required feature, but was preventing them from enjoying the story!

Keeping my theory of the “vocal minority” in mind, I still wanted to try to not have a complex scheduler and NO stat raising at all and see what happened. It went well!

I’m not saying that I’ll never do games anymore with stat raising, since in certain situation it can work, but for normal dating sims probably not. More complex games in general like raising-sims can benefit from stat raising, in particular to unlock specific scenes or gameplay features (new job, new class, new area, etc) but for games where the main goal is to advance in the story and unlock romances, probably it’s not such a good idea.

This wasn’t really a possibility since this artist doesn’t draw adult stuff, so even if in future we’ll do more games with her art, they’ll feature  sexy content at best. Personally I still love the art style and in some cases even if there’s no frontal nudity the CG can be beautiful (if you played the game and saw for example Nadia/Brandon romance you know what I mean).

Still, I was a bit worried that this could have an impact on sales/public reception, and instead it went well. I mean, I can’t know if it also had an optional full nudity patch what could have happened 😛 But I’m still happy about the results as they were.

I am very happy how everything went and the game was a success in my point of view. Of course considering the rising competition and the fact that non-porn VNs on Steam have really a hard time, but especially all those things considered, it could have been a disappointment. Instead the game did better than some titles I relased back in 2016 and I was positively surprised 🙂 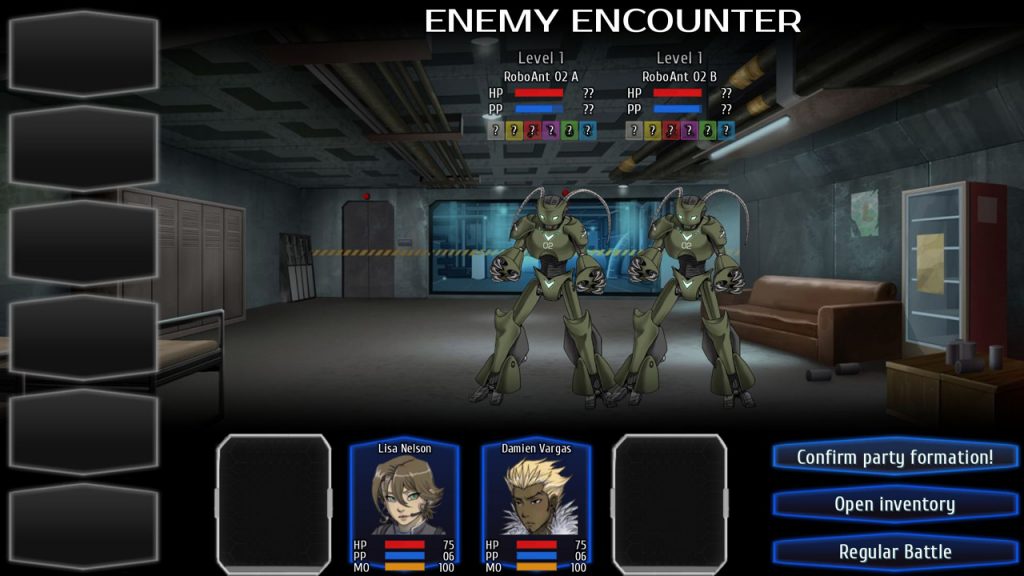 In the screenshot above: like the old times, fighting malfunctioning Roboant in the tutorial battle!

Time for an update on the RPG I’m currently working on (personally, I have other writers working on other games right now, like Volleyball Heaven and other “secret stuff”).

Last month I ran a short alpha-testing in my forums (though it was open, everyone could try the prototype) to get some early feedback on the combat. It was very useful since I already added some tweaks/features. In case you missed it, you can still try the prototype here: https://www.winterwolves.net/viewtopic.php?f=37&t=4153

It’s slightly outdated since I’ve changed a few things on my side already, but of course if you find more bugs or have suggestions feel free to let me know.

I think in general the RPG part of the game it’s at good point, of course I’ll do a lot of tweaks and updates like I did for my past RPGs during beta, however the base/core system is there. Now my goal is to get the isometric map working so that I can playtest myself all the missions (and side-missions) of the whole first chapter.

Currently the plan is to have the game divided into 4 chapters (not all of same length!) and have the game demo end at the end of 1st chapter with one of my usual cliffhanger scenes 😉

The main difficulty is that I’ll have to deal with a lot of things plot-wise:

while the RPG part of this game is complex, I’d say that the plot part is not easy either! So I am first planning everything before I jump into writing scenes that maybe I have to discard later on, because I didn’t consider this path or this variable or this plot hole and so on. Maybe it doesn’t seem, and you probably won’t even notice while playing the final game, but it can be really complex and drive you nuts, believe me!

Once I have the first draft of the plot finished I’ll then start scripting the game and at the same time also code the various battles and quests, and probably add a few more along the way since I always get an inspiration to write new sidequests as I code the main game. My goal is also to have personal quests for each character, since it’s also a classic of RPG (and almost all my RPGs had this personal quest feature).

I still don’t think I’ll have the game beta finished before end of year, also because I hope to be “distracted” from working on this because I need to publish Corona Borealis and Volleyball Heaven since I know many people are waiting for those games as well 🙂