I have yet to receive all the voices for Bionic Heart. The total voiceovers size is now around 120mb…! 8)

In retrospect, probably wasn’t a good idea to wait and have the game fully voiced on release. I mean, the voices really change the game completely: on the other hand, they also delayed the game release (was ready in the beginning of June). And even after I receive them all, will need to retest the game again because could have miss some lines and so on. I really hope in the end all this effort will be worth it in term of sales.

The actors did an oustanding job so far, so certainly isn’t their fault for anything. Simply if I make voiced games in future I’ll need to start the voiceovers as soon as the scripting is done (before getting the final art). Or maybe I should avoid adding voiceovers to such HUGE games! 😀

Another good news is that I am having a friend of mine doing a “dungeon game engine”. So yes, FINALLY Tower of Destiny will see the light! I have only a very early alpha version of the engine but it already rules. Full 3d means that I can move and even if the movement is “in blocks” (with turning of 90° degrees), being in full3d means that is very fluid, can have dynamic lightning, animated textures, and many other features.

I can’t wait to finish some projects I still am working on right now to concentrate 100% on that game. Finally, doing a dungeon crawler RPG is a reality! Hurrah 🙂 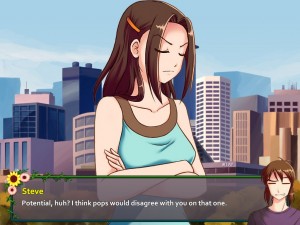 The nice art you see in this page is from another project I started, called “The Flower Shop”. It features cute manga art from Deji and writing from Sake-bento. It tells the story of a lazy young man, Steve, that gets “exiled” into a farm with his old uncle Sam, because of his poor grades at school.

His father, typical man-in-career, can’t stand having such a lazy son, so decides to see if such an experience can change his life or at least his mindset.

The game should also feature some simulation parts, beside a weekly planner similar to the one found in Summer Session. There will also be several different endings. Definitely something more than a simple visual novel 🙂

I rarely makes games with “impressive figures” or “features” to show off, but this time, I did it. Bionic Heart will surely have more than 80mb of voiceovers! That is quite a lot of voices, since in practice the whole game is voiced, even when the main character Luke is thinking. I think that this added a lot of atmosphere to the game and hopefully people will be happier to buy it, after seeing all the work there was behind it.

I’m looking forward on a release coming around the end of this month, depending how long takes to voice the remaining texts 🙂 The work is about 70% done, so I really hope to be able to release the game at end of June at least.

About other projects, at the moment I’m working on Heileen 2, and two more “top-secret” games. One that will mix a popular card game (poker) with a visual novel, and another that will be space-themed.

Yes, the voiceovers actors are doing a great job. And I can officially announce that I’m going to release Bionic Heart fully voiced, unless some really unfortunate events occurs (which at this point I really hope doesn’t!).

In the short clip above you see part of the introduction and the first choice you have to make in the game. You can notice a system similar to those used in Summer Session, each character has a relationship value towards you that can change during the game based on your actions. Don’t be surprised if later in the game there will be unpleasant consequences to your early choices… characters remembers how you have treated them in the past! 🙂