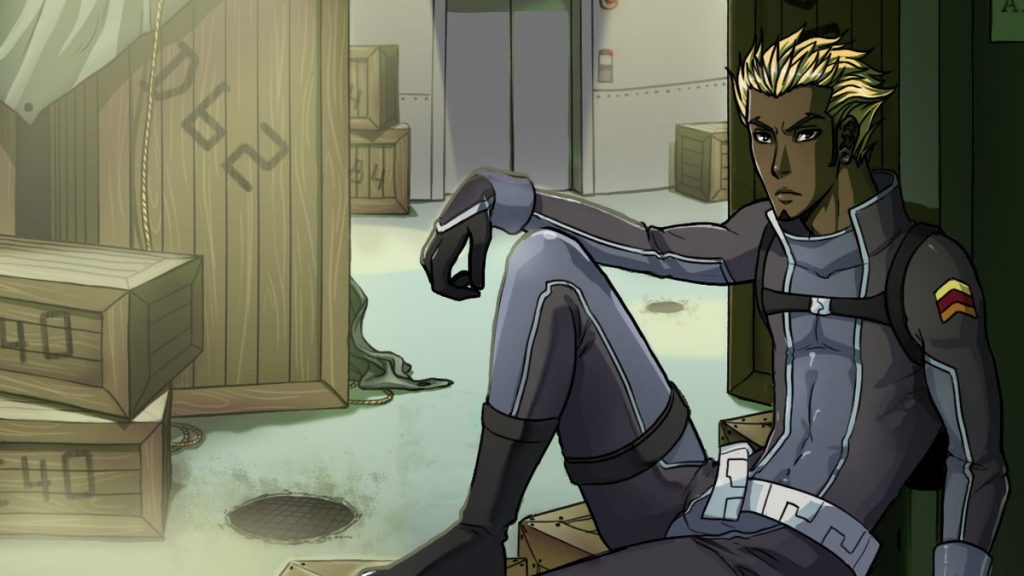 Damien Vargas was the leader of the so-called “Rebels”. Fighting for freedom against the evil Empire. Well, sort of. In reality, Damian was little more than a smuggler, trying to make a living during hard times by selling rare and stolen items on the black market.

When he got an offer he couldn’t refuse, he attacked the Planet Stronghold colony. However, he found out he was tricked. The same myserious people who offered him money to create total chaos ended up attacking the rebels too.

Because of this, he sought out Nelson and negotiated a truce with him/her, swearing to help in anyway he could. Nelson eventually learned that apparently Damian’s father and John Nelson were comrades-in-arms in a previous war on Planet Stronghold. Nelson doubted Damian’s words, but the rebel swears it’s true.

Playing as Lisa, you could end up in a romance with him. Despite Damien’s cynical and rude attitutde, a spark started between them. Is it only a physical attraction? Perhaps, but whenever the two are in the same room, they can’t stay separated.

After the war was over, Damien and several other rebels joined the colony and formed a new ‘Special Intelligence’ division, where their security and anti-espionage abilities would be put at good use.

Work is going well during this month, I added some extra features like the screen above, and I also coded a good amount of the 1st chapter. Like many other games of mine, even this game will be divided into four chapters, with the first being the demo. Of course, they’re not all the same length, so if you finish playing the demo of the first chapter doesn’t mean you’ve seen 25% of the whole game!

Last but not least, I managed to update the Google Play version of Love Bites to add Ashley bonus character. As usual I had to delete a “very offensive image” (lol it was a scene with Nadia FULLY DRESSED, but somehow it was too much!) but only in the app page, so the game remains untouched. I have no estimates for Amazon or iOS versions sadly.

Happy New Year! Like every year I’m going to set myself some goals. Taking a look back at last year’s goals, I still have to finish Volleyball Heaven and Planet Stronghold 2, even if for this last one it was obvious I wouldn’t make in time last year.

I think it’s safe to say that unless I get hit by a bus or something, both games should be finished this year. Of course I’m also going to finish Corona Borealis since we’re at very good point.

I’m particularly curious to see how people will react to Corona Borealis in particular, since it’s going to be a “SMALL GAME” (albeit very polished!) for real this time. It will be shorter than my other games and will be priced accordingly (I haven’t made my mind yet about the price but it won’t be over $9.99 for sure).

Beside those 3 games, I might have some surprises, but even if I have some projects going on “in secret” (except for my Patreon supporters) my main goal in the next years will be to finish all the games I started, in particular Loren 2 and Undead Lily since are the oldest games I’ve announced that I still have to finish. I should also really be getting Summer In Trigue done though, luckily that’s not a RPG so I’m not involved directly into it.

Every year I keep saying that I would also do some “experimental games”, but I never find the time. I have an idea about a card/sim game that I think could be interesting, in this case it would have a really minor story since the focus would be mostly on the gameplay. I need to find the time to code it though. A good moment could be when I finish Planet Stronghold 2, since I’d need a break before jumping into coding Loren 2 straight.

Anyway we’ll see. Honestly I can’t wait to have both Loren 2 and Undead Lily finished, because I think it’s really bad, both for developers and also players, to have games in the works since so much time. It’s a mistake I’ll never repeat again in future, alongside to never make sequels (in particular keeping the same protagonists).

In summary I think a good release schedule could be:

However, like happened back in 2018 with Cursed Lands, I realized that if I can work uninterrupted on a game myself alone, I can make progress much faster, and the story and gameplay are much better integrated (obviously since I write as I code and viceversa). So PS2 estimate release might change greatly depending on various factors. It would be nice to have it in beta before the Summer!

Like every year, when this is about to end, will be fun to go back and see how things went vs how I planned it. There are going to be some surprises for sure.