Like every year, besides wishing you Merry Christmas, I am going to review the year that is about to finish. As I wrote already in the past, this was a good year (professionally speaking) for me.

Haha, early this year was really me against the elements! I mean, here it’s not unusual to have snow (I live at 800m on sea level after all) BUT, this year was really crazy. I have never seen so much snow as this year since I live here (over 10 years!). To this, add some crazy winds that blow straight from the mountains to my house at over 100km/h, rain/hail storms, and some walls of my house were damaged.

But wait, that wasn’t all! My already crappy wi-fi connection (normal broadband is not available here yet) decided to go offline for weeks. I remember doing updates for Cursed Lands from December to March (that’s THREE MONTHS!) using my normal phone connection which features the superspeed of 640kbps! I was uploading the games at 25-30kb/s: a full 100mb would have taken me AN HOUR to update… for every single OS. Yes to upload 3 separate installers (Win, Mac, Linux) would have taken me 3 hours. During a beta, where you usually update the game daily. This was clearly not possible…

Itch.io to the rescue

Luckily, the year before, I started migrating my games to the new platform called itch.io. I wrote about the reasons already in a blog post back in 2017, but in this case it was really my safety net: thanks to the diff patching system, I would only need to upload chunks of 5-10 mb at time. So even with my  terrible connection, I managed to do updates that would only take me 15-20 minutes to upload max, without driving me nuts.

So the result was that I managed not only to do the beta regularly but even finished Cursed Lands much sooner than I thought!

I already wrote two detailed postmortems about Cursed Lands and Love Bites, so here I am only going to add that of course I was very pleased by the result of both games. I was really surprised to have Cursed Lands finished so early this year, since I had scheduled a late Summer or even Fall release!

For Love Bites instead, I knew more or less that it would have been ready in Spring. I delayed the game release a bit because it would have been too close to Cursed Lands, but that was the only reason. It was also great to be able to release a free new character (Ashley) later this year. Once again  many thanks go to Miakoda, one of my most reliable collaborator!

I cannot deny that it was a VERY stressing year, also because I lost a pet and had to do some house renovating works (I really coldn’t delay them any more…). But ultimately things went well. I’ve also learned another lesson which could be summarized in: believe in yourself and your ideas. I remember when PSCD was out 2 years ago, I was depressed. Now, with the art fixed, it’s steadily my 3rd-4th best selling game. Cursed Lands on release had many negative reviews, claiming writing is stupid, art sucks, and so on. I was a bit disappointed, even if by now I understand that Steam review are just a bit… “on the negative side” in general. 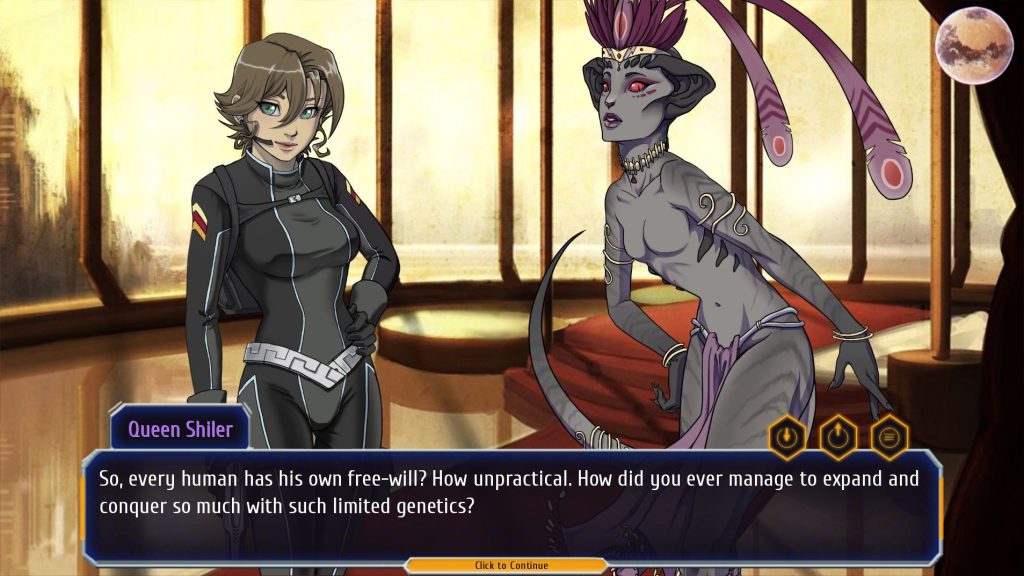 Yet, it sold extremely well so it’s obvious to me that I must have done something right, or at least, I managed to match the tastes of a lot of people, the “silent majority” who simply enjoys a game and doesn’t bother to write any review (even if maybe it would be positive), but that group is the main reason why I’m still in business after all these years 🙂

So, Merry Christmas and Happy New Year to everyone! And don’t forget to check my usual sales both on Steam and itch.io: 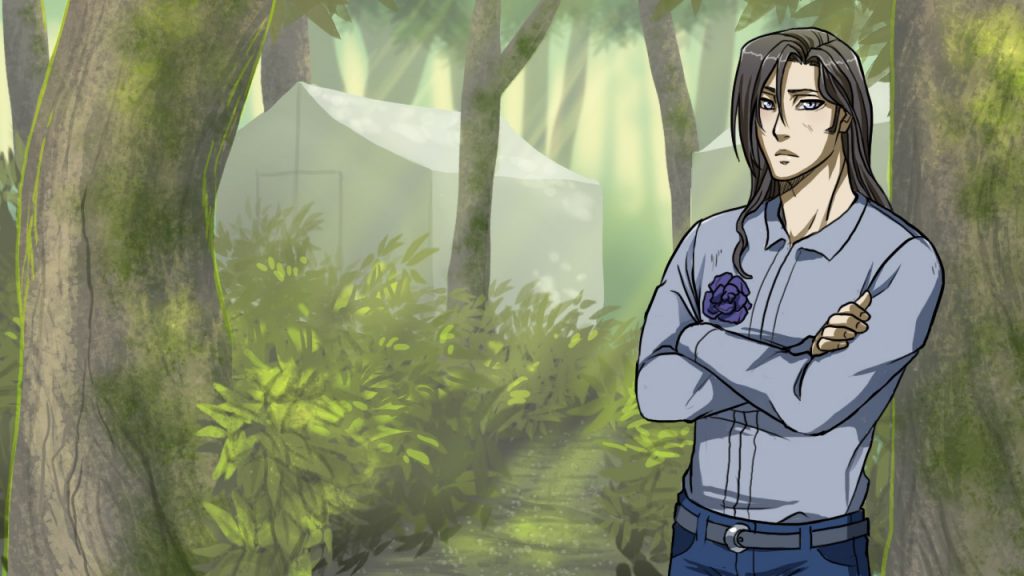 Prince Cliff was the first male gay character to appear in my games. I really like his design even if I know some yaoi fans prefer more muscular men. But you haven’t seen Cliff naked yet! Even if you wouldn’t bet on it, he has some nice muscles too. You’ll see, since Planet Stronghold 2 will feature optional fully naked romance CGs!

Prince Cliff has very little in common with his father, King Oscar. Cliff is very tolerant about the alien races and will always seek a compromise or even an alliance over a full scale war.

He is a daydreamer; more interested in culture and the arts. Though he isn’t a skilled warrior, don’t mistake Prince Cliff for a weakling or coward. He is a cunning strategist and will react to any threat to himself or his people with maximum force.

If you chose to side with the rebels in the first game, Prince Cliff imprisoned his father and took over the colony’s command in consort with Queen Shiler. After the final victory, Shiler returned to her people and while the two continued to have a good relationship, Cliff couldn’t help but notice how quickly new Maradan towns appeared.

If you sided with the Empire, Cliff would be imprisoned at the end of the war by his own father and sent to a prison on the planet Omega. However, he disappeared as soon as he arrived and nobody knows what happened to him.

If you started a romantic relationship after the final victory, Joshua and Cliff were burdened with additional responsibilities. Despite this, they were determined to make their relationship work because they knew it was special. 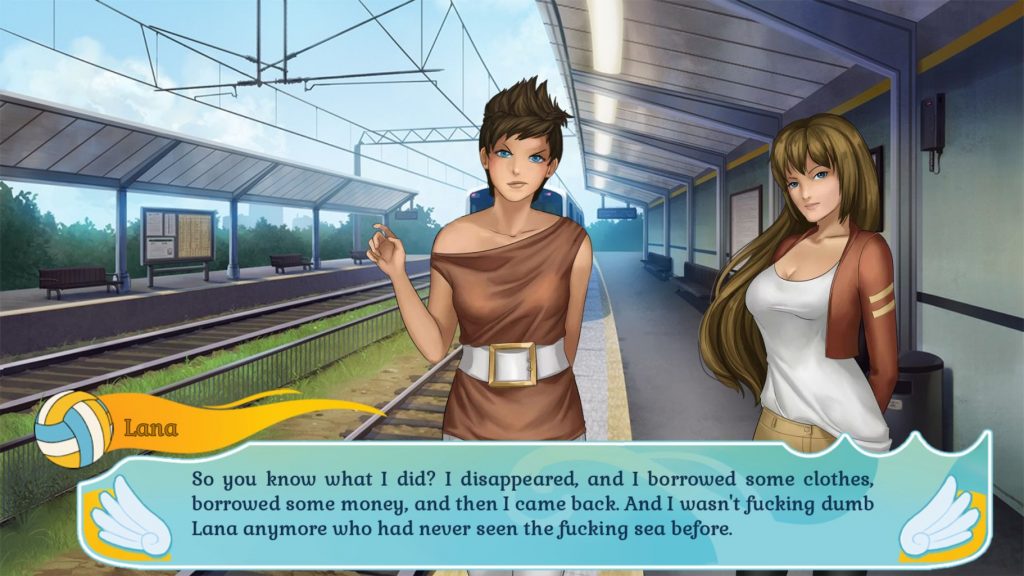 As you can see from the screenshot above, this game language/theme is much more mature than my usual ones!

Since I announced this game, a lot of things happened. I will assure you though that this won’t be another “cursed” game (I’m talking of course about the canceled Nicole yuri). Also because the story is fully written already, but there are so many outfits/scenes that scripting is taking a while, and also writer is reviewing and polishing every scene.

As I already said it won’t be out this year, but next year for sure! It will be my first title with very mature themes (and not just in the super hot romance CGs but also language, etc) so I’m curious how it will do.

Contrarily to what I said before, a “full Visual Novel Mode” version won’t be possible, but this only means that the scheduler will always be present. You’ll be able to skip the match completely with an instant result.

The gameplay will matter to reach certain achievements but in general, you should be able to unlock all the romance CGs. I also know the writer is preparing a full walkthrough 😉