First of all, Happy Valentine’s Day! I am running a small sale on itch.io until Sunday, check it here: https://itch.io/s/16804/valentine-2019

And now I’m introducing one of the new characters of the game and probably one that will become the most popular (at least speaking about the male characters). Actually, he might be the only new one I’m going to introduce! Yes, because the other new ones could be a bit of a spoiler of the game story (one in particular) so I haven’t made my mind yet if I’ll introduce them. I’m talking of course about Lakadema and… another one which his appearance alone might be a source of questions already! lol

Milo McKendry is a new character who will appear in Planet Stronghold 2. He comes directly from the Mars Military Academy and is a synth specialist ( synth encompasses things like synthetics, robots, androids and mechs).

Not much is known about him and his past, but his arrival doesn’t go unnoticed! He travels with this pet, Soot, an animal found on Mars which people call “dust bunnies”. He swears that Soot is harmless, however it’s not entirely true. Soot will give a hand on the battlefield and be a source of funny moments outside combat (especially when standing up to Rebecca, making her furious).

Milo’s personality is bizarre to say the least. He often uses humor to get through the most difficult moments, but he can be serious if the occasion demands it. However, don’t expect him to be serious and rational at the same time; you might be asking too much!

Milo is a bisexual romance, meaning he will be available both for Joshua and Lisa. Rumors say that there is something between Rebecca and Milo, and she might already know him before he arrived.  However, this will be discovered only by playing the actual game…

Planet Stronghold 2 development is going very well. As you might be aware I’m writing it myself (there’s no way such a complex, branching game could have been written by an external writer!) but I am of course using an editor to review everything. I think the result will be good.

We’re also doing the last finishing touches to Corona Borealis, the secondary NPCs are all finished and the last missing background is being made right now!

Meanwhile the script reviewing for Volleyball Heaven is still going. I am not talking much about that game recently, but no worries it’s still going! I am working a lot on Planet Stronghold 2 right now because in a couple of months I’ll need to do more house-renovating works that will last about one month, so I’ll be very busy during that month and for sure I won’t be able to work on a complex game like a RPG. But I might be able to script VBH instead! 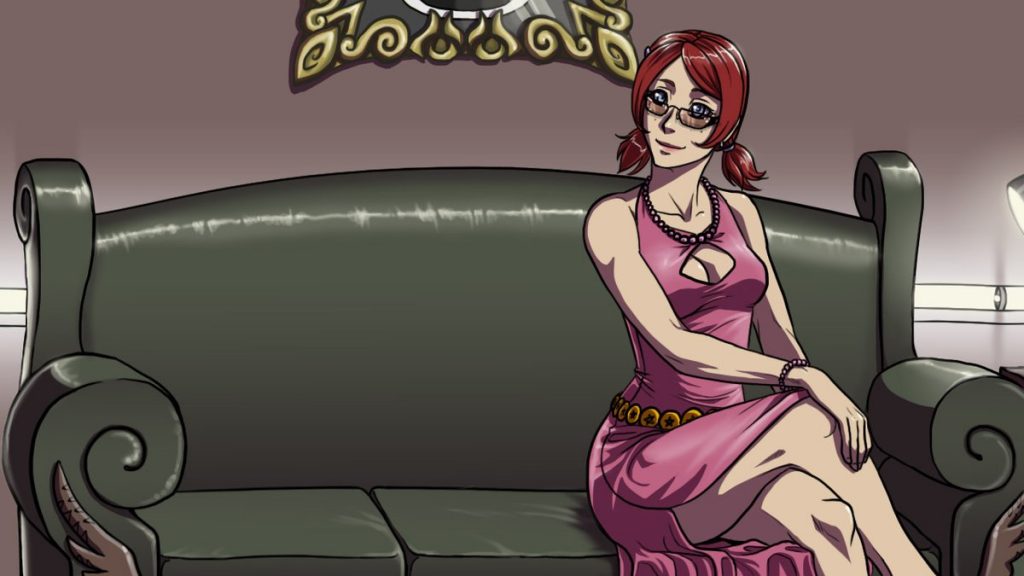 It’s no secret that Michelle Lafleur is not the most disciplined soldier. She prefers to be informal when talking to direct superiors, she frequently questions orders, and she is more likely to be found at a party than the training grounds.

So why is she still in the army, and more importantly on Nelson’s team? The reason is simple: she is naturally ambidextrous, dual-wielding pistols or submachine guns with deadly accuracy. Such ability is so rare that previous officers before Nelson turned a blind eye to her other problems.

Despite her natural talent, Michelle doesn’t really like to fight. She will always seek a peaceful solution over conflict. Even if she is very good at it, she doesn’t take any pleasure in killing other living creatures, even if they are aliens threatening her people.

Because of this, at the end of the first game she resigned from the army and lived in one of the new flourishing Maradan towns. She started to work as a bartender, the perfect job for her allowing her to socialize and meet new people.

Michelle was unsure about her sexuality until she broke-up with her last boyfriend Marcus. Since then, she realized that she only likes women. Playing as Lisa, it is possible to end up in a romance with her.

Progress on Planet Stronghold 2 is going well! As you can see above, I added a completely new feature (for my games of course) that is, automatic combat. The AI is rather dumb (unfortunately I couldn’t re-use the enemy AI) but to be honest it’s very effective. I playtested several random encounters and if I equipped my team properly, I won most of the fights in Normal difficulty (of course not in the optimal way as if I had played it myself). Overall I think will be a useful feature, both for players but also for me during testing.

I’ve also added another difficulty setting option. Beside the overall difficulty, now you can also choose if the enemy levels will adapt to your party. It works like this: in each sector there will be fixed quests/battles and random encounters. Each encounter’s level is based on the sector. If a sector says levels 1-5 means that enemies will usually be within that range, except bosses.

Needless to say, the latest option increases the difficulty significantly. I’d dare to say that the game is harder in Normal difficulty with this last option enabled, than in Nightmare with this option disabled, since as you can imagine if the enemy levels doesn’t scale the same way as yours, you can use grinding to get to the plot battles at higher level/better equipped.