First of all, in case you don’t know, the game is now out! You can get more info at the official page here: http://www.winterwolves.com/theflowershop.htm

Then I want to give a brief background history on this game in case someone is interested. It all started shortly after I found out about Ren’Py engine and the visual novel / dating sim world. I got to know the LemmaSoft community (which has been very helpful for me in making those games since then) and several great people like Tom Rothamel, Ayu Sakata and M.Beatriz Garcia. Those two last people were later fully involved in the game.

Summer Session, a dating sim made together with Hanako games, was released in July 2008 and was very successful, with mentions on Gamasutra, Macworld, and so on. So I wanted to make another, but at same time go on with my other projects (Heileen, Spirited Heart would get released in the next months). While browsing Lemmasoft forums I found out Deji (Garcia nickname) and of course I was impressed by her skills, but also by the fact that at those times (if I remember correctly) no games (even freewares!) were ever released with her beautiful art.

I thought to ask her if she was interested, and I still remember after I sent her my initial game idea she wasn’t much motivated because of the “guy goes after girl” theme: but when I expanded it mentioning one of the main girls would be a Flower Shop owner, she immediately changed her mind! Also, in the beginning, the game was really like another Summer Session. But then (luckily I think) I decided to ask Ayu Sakata to write it completely on her own, just following my original plot idea, but leaving all the dialogues to her.

Was July 2009, she had just done some proofreading /editing for Bionic Heart and I really liked her work, so asked her if she wanted to take care of the project, and she did. She changed the player perspective from the classic male point of view (the one of Summer Session for example) to a more delicate, romantic view (I’d say definitely more female!).

Meanwhile Deji was going on with the pictures, but was a bit slow because had to do an internship. In late 2009 the plot was fully written but there was still several pictures left: I still remember Marian was the last girl to be added, and some of her poses were paused for over 3 months 😀 But then, the internship ended and I must say I was surprised to see Deji motivation and speed (quality was NEVER in discussion) ! She finished all the remaining art in December, and the main menu in early January.

The background art was done by other external contractors and the interface… is my fault in case you’re wondering 😉 In December 2009/January 2010 I had lot of fun programming the farming sim part: I wanted something casual, not very complex but not too easy either, and I think I made it. Once again I was pleased to work with Python which is without any doubt the best language ever to do … just anything, from games to any other kind of programming task!

So that’s it… basically the game from its original concept in October 2008, was finished more than 1 year later, in January 2010! Of course, there were lots of pauses and dead moments so isn’t like the game took 1 year of actual work to make!

And now, what’s next? I am already discussing with Deji and Ayu about a possible “girl side” version of the game. I agree, I think many girls would like to deal with nice guys like Jacob and Trent…!

After I posted the first images I realized I created a bit of a mess. I forgot a simple rule, that the first images you show of a new game will also reflect what people think/expect from it.

But how will be the gameplay? Actually, will be one of my most unusual VNs… to be honest not even a VN, even if there will be several scenes to tell some important parts of the story, in particular the introduction to the new case.

The gameplay will be similar to Spirited Heart, you get a case, travel to a place and then have several days in which you decide which location explore or what action do. Meanwhile of course things will happen: someone might get killed, or disappear, or something else. I have yet to decide if to set a fixed amount of time to solve the case, or simply use a “variable based unlockable path”, which is probably better so players don’t get frustrated because they run out of time.

Vera will be able, on each case, to select 3 skills to learn for the mission, which will modify the game in several points. For example she might learn “Science”, and before entering an old building she could understand observing the structure that there’s risk of collapsing, or could repair a broken videocamera to see if she can recover some pictures, and so on.

It will also contain at least one word-based mini-game, and several endings even if most of them will be “sudden deaths” ! Yes, will be a game where you better save often… 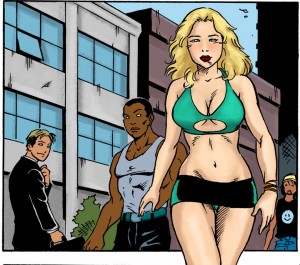 After posting my last sketch about my upcoming mystery / detective game Vera Blanc, I got some comments from people about the artstyle.

Everyone seems to love the new style, and I’m a bit relieved since it was a bit a risk to move away from manga style (even if many said that Heileen was a mix between manga and american comics).

Note that I will still make manga games too in future, but I also wanted to try a more realistic / comic style.

Especially since in that style women looks better IMHO 😀

I played with saturation level based on suggestions of Jake, and indeed seems that it looks better to me too. I wanted to obtain a sort of comic look, but before the image was less saturated than the one I posted above, and while was ok for a printed comic I think this new version fits more a computer game.

That’s just an example of what kind of fanservice you can expect from this series – yes, if things go well I plan to make a series of games. Another decision I had to take, which scares me, is to have multiple artists work on each “episode”.

Like in comic books, where each episode would be drawn by a different artist. I had to take this decision if I wanted to release each episode at 4-5 months of distance, rather than 1 year 😐

I hope players will understand my motivations! 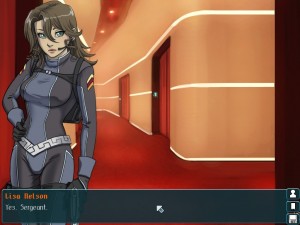 Regarding art, if I had the money I would make all my games looks like the picture on the right: that’s a new screenshot from Planet Stronghold game, probably the most expensive I’m making so far in term of art and coding (and I hope it will do well!).

Just for fun, I also wanted to post an image of one of my first games as indie: Universal Boxing Manager (see below).

Ok, it’s true that simulation/strategy games usually don’t need great art, however is fun for me to see how I started, and how the quality of the art in my games changed (in better of course!) over the years… 🙂 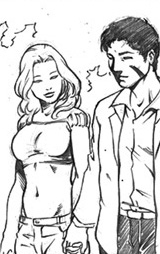 In the picture on the left you see a sketch for another project of mine in progress right now.

As I said several times, I always start many projects at once because is normal that there are some “dead moments” between a production of art, voices, programming and so on. So it’s always a good idea to have another project standing by when your main one is on hold. Or simply to “do something different”. Working always on the same thing can get tiring sometimes even if you love your job like in my case 🙂

This game is going to look very different from everything I’ve done so far. First of all as you can see, it doesn’t use manga art-style. I love manga, but I like also the other comic styles (american, etc), so I decided to try making a different game. I hope people won’t buy my games only because they’re manga! :p

About the gameplay: it will be a detective/mystery story. I’m still planning it so I can’t exactly tell much about it, but there will be some mini-games inside it, similar to the recent Spirited Heart update. There will be also a scheduler, and a very simple RPG element in it (some skills to pick at startup that will influence the story slightly).

The cute blonde on the left is Vera Blanc, and she is gifted with some special powers… while the guy on the right is Brandon Mackey, his partner during the investigations. In this image they’re hand in hand but actually in the game they’re not a couple: it was a wrong sketch made by the artists but is so nice that I wanted at least to put it in my blog!

More info about this project coming soon. Now time to get back to add some more enemies in Planet Stronghold…

Today I’ve received from the new Planet Stronghold artist the sketches for the characters. She worked already on a few enemies for the game, like the famous RoboAnts 🙂 But now I decided to use her also for all the game characters! 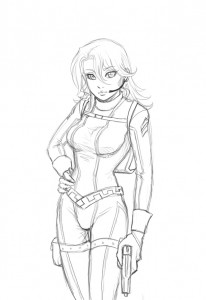 On the right you can admire the new version of Lisa Nelson, the game main character. I like her, she’s really beautiful but has also a determined expression/pose, typical of the natural born leaders!

I’m also going to replace the all-white uniforms in the game with more colored designs. I also have the “casual dressed” version of Lisa which is even more sexy, but don’t want to post everything here, you’ll have to play the game to see it 🙂 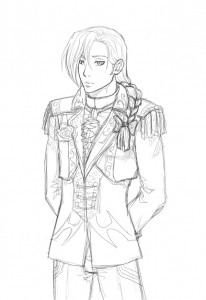 That nice looking guy on the left instead is Prince Cliff, a character you’ll meet later in the game, when you’ll encounter the Royal Family and decide if to work for them.

In my original idea you can choose if to remain loyal to the Empire (and the Royal Family) or become a rebel and join a group of native raiders on Planet Stronghold who wants to fight for their freedom.

Beside the sketches I’m also working on redesigning the battle screen to offer more fast-help, even if so far people who played it all said that the game is fairly intuitive to use: not just the veteran JRPG players but also a few more “casual” style players said it was pretty straightforward.

I’m happy since with this first attempt in a VN-RPG hybrid I don’t want really to create a complex JRPG, but build a base to make a JRPG (probably a fantasy one) later this year (or probably next year, considering how many projects I have going on!).