It’s almost end of July, and this year so far I released 3 of the 5 planned games for 2010. The Flower Shop and Card Sweethearts were already in production since last year, while Vera Blanc: Full Moon was entirely made this year.

I am quite satisfied for how things are going looking at my planned releases, a lot less about the actual revenues 🙂 But to be honest it’s not something under my control: the crisis and the return of middleman are making the life of indies way much tougher than was just 2-3 years ago…

Unfortunately it means that some things are very likely not going to happen. A 3rd episode of Vera, despite the game has received unanymous praise from all the press, isn’t going to be made, at least this year, and surely not in this format. But let’s proceed with order:

So if I actually manage to mantain that schedule, I would release 6 games, and not 5 as originary planned. It would be cool 🙂

Then, what next ? What will happen to the character of Vera? Will I keep doing downloadables?

I don’t know. I have lots of ideas in my mind right now: following the rule #4 of my “Five Golden Rules” post, I want to experiment:

That’s it! I don’t know yet which of those ideas will turn into concrete games and which ones will just remain ideas… but for now, I’ll finish all the project I started, and then will have to seriously think what to do next.

I thought to take all the years of experience as indie, and write down five ESSENTIAL rules/tips to follow if you want to be a fulltime indie, focusing on direct sales:

Of course, this is based on my personal experience! I hope you found this post informative, and if you did, spread the word about it 🙂

I’ve already uploaded two teasing videos on youtube (you see one above) and now I’m officially announcing the next episode of Vera Blanc, called Ghost In The Castle, that will be released this fall, probably in September. The game story is being proofreaded/edited, so all is need after that is some testing and reviewing the plot to be sure that there aren’t big mistakes (plot holes and such). As you can see from the video, there’s a new comic artist for this game, Ricardo Mendez from a Brazilian comic studio.

This time, Vera and Brandon are investigating a mysterious ghosts that is haunting a castle in a town in middle of italian countryside.  A local famous businessman, Roberto Anastasi, wants Vera to solve the ghost problem, because he doesn’t want the town filled by tourists. The first day seems to be rather quiet and relaxing, but as soon as the night comes, Vera will have a short encounter with the ghost! A short chase in the woods that ends up in a opening and a man hanged on a tree!

Stay tuned for more details and a more accurate release date for the game.

If you’re a player, this is going to be a bit tech-boring post, be warned 🙂

I wanted to share what I’ve learnt so far from the release of my first Public Alpha of my game Planet Stronghold. Was a good choice to make it a downloadable? What if was a webgame coded in Flash /JS /Unity ? This is what I think are pro and con of each:

Also, it’s SUPER EASY to make mistakes with online games. A first thing to do is NEVER mix your test server with the live server. For example I uploaded a wrong file last night, and the autoupdater would keep looping, thinking it’s always 1 version below the latest one 😐 Luckily for me Ayu was testing the game and reported the bug, which was only a wrongly uploaded file on server…!!

So for now I’ve learned lession number one. Always do your test in local, and if you really must, have a BACKUP SERVER to do your own tests. Never test anything on the “live” server!!! 😀 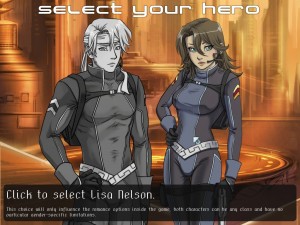 I’m proud to finally announce the first public Alpha of my next game Planet Stronghold. For those who don’t know what it is, I’m currently also building the official website which will also contain more info about the story and each character, but for now I can tell you what you’ll find in the game:

Instead what you won’t find on the game:

Are you still here? Good because now comes the good part, the download links:

I absolutely love to get feedback on gameplay and/or any bugs you encounter. Especially for the mac and linux platform, since I have already many testers on Pc! The build uses a very new version of Ren’Py game engine so you should be able to play with openGL acceleration enabled (press key F to go fullscreen).

Thanks and I hope you’ll enjoy the first alpha, even if is quite short for now 😀