After some minor updates, I started working on the big Spirited Heart update today! 🙂
There will be some major changes:

– you can now play until you’re 30 years old (so 2 more years)
– the penalties even in the Standard play mode will be greatly reduced
– you’ll be able to learn “Titles”. They’re a sort of Achievements, and require high skills values in more than one field. For example you can earn the Title of Warrior if you have Combat Skill at 99 and Magic Skill at 75
– from time to time, a God/Goddess might appear to your character requesting her to achieve a specific title before the end of the game. If you make it, you’ll unlock an extra additional unique ending for each character
– there will be an optional minigame when doing jobs: if you get a good result, you’ll be able to raise the associated skill much faster 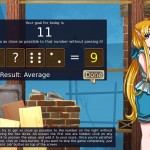 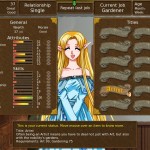 As you can see enlarging the two screenshots above, the minigame consist in trying to get as close as possible to the number of the day (that changes everytime) using 4 dices. The fist dice is discovered, and then you have 3 more dices you can pick. If you pass the value, you get a poor result, while if you get close, you’ll earn bonuses in the skill advancement for that week. In case you exactly match the number, you’ll get a big bonus in the job associated skill (sometimes even +4)!

So yesterday I released a Beta pre-order version of Heileen 2! Since I had many people waiting for it, and since the game is basically done (except some last-minute fix) I thought I could release it this way, without voices.

Of course, people that buy the pre-order now, will also receive for free the updated voiced version once is ready (but I believe we’re talking about January).

So, if you bought the first game, or some other of my games, you know what you can expect:

– top quality manga artwork: the amout of art in Heileen 2 makes it my biggest game so far!
– intriguing story with many mysteries: you’ll discover many things from Heileen past. Who she was, her surname, her parents, her early relationships with Marie, and more
– quality writing: the game texts have been proofreaded by a very good native english speaker, so no more mistakes 🙂
– 15 unique endings: discover the 7 sins  or the 7 virtues ending. And the bonus “limbo” ending too!
– 21 dreams, each one with two possible outcomes that leads to two or more different paths: a guarantee of big replayability

So what are you waiting for, go to Heileen 2 webpage and preorder the game!

I’ve been playing Fallout 3 on Xbox a lot lately. A thing I’ve noticed is that leveling up is done in the JRPG style, and not in the old AD&D one. For those unfamiliar, let me translate: JRPG usually have FAST leveling up. It means that you will level up quickly and constantly during the game, opposed to the AD&D system, where leveling up is a real “event”. I still remember the old SSI games based on the AD&D rules, the early levels were even acceptable, but then… going from level 10 to 11 was a real pain 🙂

To be honest I was a fan of the AD&D. Until recently. I mean, is cool that every level up is something unique, that brings new perks/features to the character. But on the other hand, I really like constant reward to the player. In Fallou 3 (but also in other games like Everquest 2) for example you can experience points by just discovering new locations. Or every trap/lock that you manage to disarm/unlock without a key. Beside of course completing quests and killing enemies!

It’s cool to see the EXP bar whenever you do one of those steps. It feels “right”. It’s like the game is telling you “YOU RULE”. I fell in love with it, and I am going to implement something similar to my VN/RPG game Planet Stronghold. There won’t be a full 3d virtual world, but I’ll fill it with many quests and also will make sure there are places in which you can use the various non-combat skills.

Speaking of which, two new screenshots: the skills screen, and the quests screen. They should both be final, no more change to skills 🙂 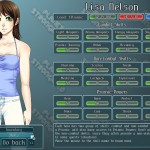 Today got the last missing background of Heileen 2! So the art is completely finished. In the two screenshots below you see Jack as woodcutter (what!? yes!) and a friendly group of pirates who seems to be interested in our heroine Heileen… 😉

I’m reviewing several parts of the game to add some cinematic effects (zooms, pan, etc) and reviewing the plot (is easy to get lost with so many choices!) and everything seems good. I also finished to put all the male voices inside the game, so I’m only missing the female ones and then the game could be considered ready to beta-test and then release.

It’s a bit discouraging that it will probably coincide with the pre-Christmas period: however I’m not sure yet, the game might even be delayed to January. Anyway, I’m still going on with my other projects, and hopefully if I can find the time I’m also going to do a decent update to Spirited Heart (nothing special, but I promised I would do one!). 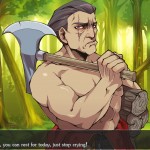 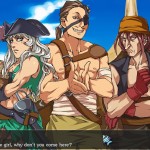 No, outside Japan there aren’t any AAA-commercial quality visual novel games, of course. BUT – and it’s sa big but, the visual novel elements are starting to pour into the normal AAA genres. Some examples? Mass Effect, The Witcher, and probably more I haven’t played.

Ok, but why you say this? What exactly defines a visual novel, and differentiate it from a normal RPG game? Well in the cases above is really difficult, but I think I could say that while RPGs had NPC and quests already as a feature, the way those two games present the dialogues and the choices makes them much more close to visual novel than other games. Indeed, there aren’t simply quests: first, there is LOT of dialogue. Those games are fully voiced (well, like all my future ones) so that helps a lot. Many people don’t like when there’s much text to read, but if you present the same text under the form of a movie/cartoon, with moving actors, scenes and voices, it’s VERY different (in practice is the difference between reading a book or watching a tv movie). In those games, there are MANY choices. Both on Mass Effect and The Witcher you can influence lots of characters/factions, and in the end, really change your ending.

RPGs always had the possibility to make choices, but to influence the world/characters around you and “unlock” different endings? No, that’s more a visual novel thing, to me 😉

Both those games were huge successes, selling million of copies. Of course, it’s not JUST because of the visual novel component: but I like to think that it played a big role. Yes, you can have visual novels features in a AAA game and not bore the western gaming public: you just need to insert them into a context with many other gameplay types (shooters, strategy, simulations). That’s what I’m going to do with The Flower Shop and Planet Stronghold 🙂