Yes, as the title says. I’m talking about indie scene, of course, even if the same could be said even for mainstream games.
Recently, thing are starting to change. Not just Bioware, with their Dragon Age and Mass Effect series, or Bethesda with Fallout, but also other new entries like Drakensang, The Witcher, and so on.

And in the indie scene? Yes even here. Almost everyone knows about Spiderweb, Basilisk games and their Eschalon series is getting known, Amaranth with their Aveyond series, Aldorlea and their various big/small RPGs, and so on.

And I? I am working on it, I swear. Is quite funny to think that, despite RPGs being my favourite kind of games, I never released a real one!!  The closest is Magic Stones but is more a strategy game with RPG elements than a pure RPG. 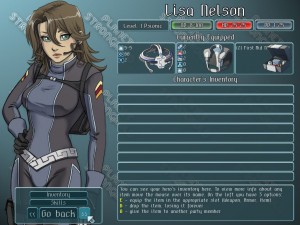 So this year I decided to do a real one. That’s why I started writing the RPG engine behind Planet Stronghold. I picked sci-fi settings for several reasons: first, the sci-fi setting is underused. There aren’t many good sci-i RPG, so I have less competition 🙂 But also because I like the setting in particular.

Second, the engine can be easily adapted to a fantasy setting. So while this first game will be sci-fi (and if does well I hope to release a sequel), I can easily change the art and tweak a bit the attack system (to include melee attacks, spells, and so on) and make a fantasy RPG.

What is more important to me though, is the story. That’s why I’m trying to write a good story, with uncommon characters. Not just “the good” and “the evil” characters, but simply factions fighting each other, every one with their motivations.

I gave up the possibility to choose between male/female character in the beginning since would require too much work – so the main character will be a female, but I’m sure that male players won’t complain to play as her 😉 Anyway, in the game you’ll control a full party, so while the story will be told from her perspective, you will still be able to control a range of different characters.

There’s still much work to do before the game is released, but slowly, step by step, I’m building my system that will be cross-platform (pc/mac/linux) and will also be able to retrieve updates automatically and also notify the user of new downloadable content patches availables (I plan to release several add-ons in the months after the game release).

Today for example I added a new thing in the inventory screen: instead of just showing off the items as a 1 line text description+some icons/stats, I display them as BIG icons that make the inventory screen look really polished IMHO (enlarge the screenshot in this post to check for yourself.)

That would be my goal with the Vera Blanc game series. Even if, as I’m not totally clueless, I “only” planned 2 episodes/games for now. But of course if the game gets some decent sales/becomes popular enough, I would plan/add more episodes. Just like in the comic books, is very common to have different artists working on each episode. That’s what will happen with Vera as well, even if I really like the new artist, so in case of a possible 3rd episode I probably would stick with him 🙂
(n.b. the 2nd artist is the one on the left in the gallery)
Take a look at the gallery below. For each image there are two versions, one from each artist. It’s the “introduction” to the character of Vera and his background, so had to be the same scene. It’s interesting to notice how each artists drew the same scene, using the same description: 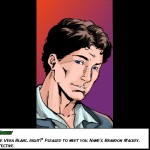 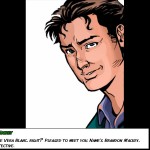 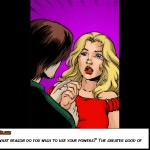 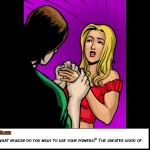 It’s true though that using that kind of comic-style art, the lines are more thick, this is due on the method by which they were digitized/draw (they’re not digital art, but traditional pencil/ink art!). The only solution would be to make them at bigger size but as you can imagine then the costs would increase exponentially… if you compare that kind of art vs my first games (artist was the super-skilled Rebecca Gunter) you can notice the difference in the lineart and in the colors.
However, I’m planning to do more of those comic style games because I like the way in which I can tell my story with them: more scenes means more power to the images, and less to the words. While my VNs are comparable to books or illustrated books, Vera Blanc is really comparable to a comic book.

I resumed working on Planet Stronghold after a hiatus of about 3 months (during which I planned the first 2 Vera’s episodes, and wrote the first one currently being proofreaded). The pause was good though, since I also had time to play the two latest Bioware’s RPGs, Dragon Age Origins and Mass Effect 2. In particular this last one, since it shares the same kind of setting (sci-fi) with my game.

Inspired by them,I decided that just generic/standard psionic power would sucks 🙂 I want each character to have at least one unique power.

They were already different each one from the other, because of the various skills (some could have high medicine skill, other high repair, and so on) but what makes really a cool RPG (or game, in general) is the unique powers, each character having his own personality/use within a party.

So I’m going to assign to each character in the game a special power, related to the combat of course. I am also going to rethink better the rock/paper/scissor system of the combat since in the first battles wasn’t really evident. Today also got two new sketches for new enemies from my artist: 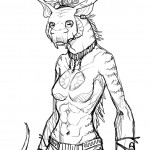 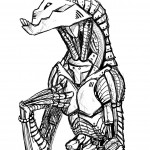 The game art-side is almost finished, just need some more enemies and a few other characters+the rebel/alien race which inhabits Planet Stronghold. Once all art is done I’m going to work on it at full speed 🙂

I had what I think a great game idea last week. It does break the common rules of narrative / games, so that’s why I think it’s cool 🙂

Basically, it’s a story told from three different perspectives. Three women, three friends, living the same story but each one from her own point of view and with different path / succession of events. The game will play quite differently from the other ones. I’m still deciding if to make it as normal visual novel or a dating sim. In practice, you would play the first character, until you arrive at what I would call “switch point”. It means you made your choices for this first one, and now you move on to the next one. You’ll be taken back to the beginning of the story (the beginning is common to all the three characters) and play it through a new perspective. You’ll share some common events, and you’ll see your previous character “executing” the choices you made before, but you’ll be able to change the plot again making new choices with the new character.  Also you’ll see new, different events that will keep the plot going. Then, with the final character, you’ll see what is the mystery, why those events are happening, who is the mastermind behind all. Yes, because the game will be a mystery one, not detective, but still a mystery style of game.

In practice, this is what you could define as a triple-otome-multiple-POV-mystery-dating-sim game! It’s just an idea for now but I’m prototyping it in Ren’Py to see if there are potential pitfall to its implementation. I really hope to make this because the story has a final plot twist which I consider quite cool, and the few people (non-gamers) I talked with all agree, saying that would be a good plot for a mystery book.

I have also in mind to experiment again with the visuals for this game, trying to raise the bar once again. I have in mind a sort of mix with manga (like my previous games) and comics (like Vera Blanc game which is coming out soon). 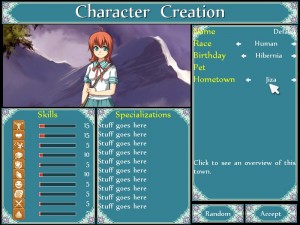 I got many requests for a sequel since I released my game Spirited Heart last year. I did a Deluxe version this december, but now is time to start something new. I am still in the early stages of planning/development, and as you can see from the WIP screenshot on this page, there is still lot decisions to be made.

However, I can anticipate a few things:

2) But fear not, because I have in mind to release several downloadable content for it, using my new system of autoupdater/patcher right from the game. This means you’ll be notified when a new update is available right when you start the game (and also by email to be sure you won’t miss it). Each update will be a very small fee, between $5-10, and will add new features to the game. The first planned is indeed the romance one and then the demon one.

3) Thanks to this “open ended” structure, it means that I can release an update with 6 characters, but nothing forbids me to do another update with 6 more characters to have romance! Or add a new type of job, a new pet (yes, there will be pets in the game), or even a new race. This means that I can develop a much more detailed game, since each update will be carefully planned. For example when I add the demon race, there will be a backstory behind it (a reason why it’s there), there will be new towns and maybe even new jobs related to it.

As you can see is an approach somewhat similar to those online games, with the difference that you’ll clearly know what you’re paying/getting, and that the game won’t require you to stay online, only to check the version and update it. It will also means that now you will be sure to play the latest version immediately, with all the bugfixes and new features.

I don’t have any estimate release yet, my HOPE is for next Christmas, however I really am not sure since have several other projects going on at the same time 🙂