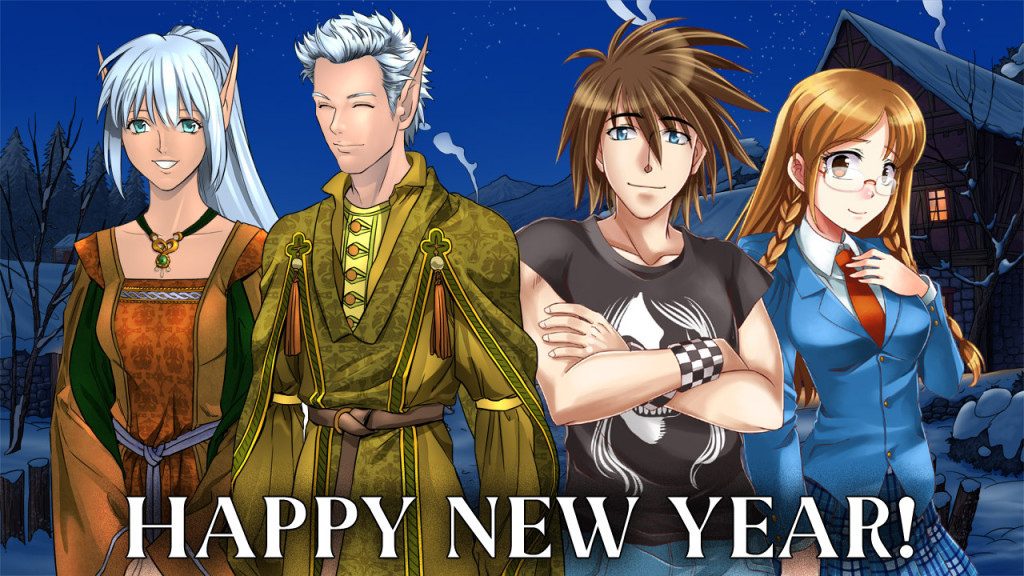 Reading back the previous end of year post, I can’t stop thinking how things have changed so rapidly for me. This is probably the biggest “problem” of being indie: things change at lightning speed, for good but also for bad!

Last year I was happy because Loren Amazon Princess was accepted on Steam. Nowadays, I have 13 games there, with the 14th (Seasons Of The Wolf) to be released next month!

Last year I had zero games for iOS. This year I ported almost all of them on Apple’s platform, and I plan to do more next year, especially since Ren’Py will get its own porting system!

This year I made “only” two games, but two big ones: Roommates and Seasons Of The Wolf.

Roommates is a title that totally exceeded my expectations. I’ve made “a few” dating sims before, but this one basically is of another league! I think probably is due to the fact that, like my RPGs, it is not focused on only a romance genre/combo, but all of them. Playing as male or female, straight or homosexual romances. It’s a game for everybody.

But also, great comedy writing. There’s nothing wrong with more serious/mature themes, but sometimes people just want to escape the mundane problems with funny stories 🙂 So, thumbs up to Michael (Roommates’ writer) for his great job on the game!

The game soundtrack by Leetstreet Boys was also a very good move. I really can’t find an issue in that game, something that “if I could go back, I would have done differently” and it’s a good thing!

ToA: Seasons Of The Wolf

SOTW is officially out since just little more than a month. It was a challenge, a bet. I wanted to see if I could make “a real RPG” myself. With romance, with a story, with my usual artwork style, but… much more detailed, with a Nightmare difficult level that would actually make people go crazy with it, with a map system, secrets, randomized items, etc.

I won that bet. The game is doing VERY WELL, beating Loren’s first month sales. Of course, is not an entirely fair comparison since 2 years have passed from Loren’s release and now I have a much bigger following. But to be honest, I was fearing that it would be a flop 😀 So seeing that is doing well reassures me and was already worth it.

Still, I’m not going to do another insanely big game like this one anytime soon! It really “burned me”, because I worked on it 10 months straight, every day, fixing/tweaking stuff. I know it’s my job, but now I need a break from such big games. I’m going to make some smaller games (this time, FOR REAL!! LOL) like Queen Of Thieves. They’ll still be RPGs, but have limited party members/skills/items/and so on. They will also be easier to balance 😉

However, there could be something new related to SOTW, maybe next year. I just received this letter via a pigeon from a certain Jariel the bard from the green lands of Grandtree: 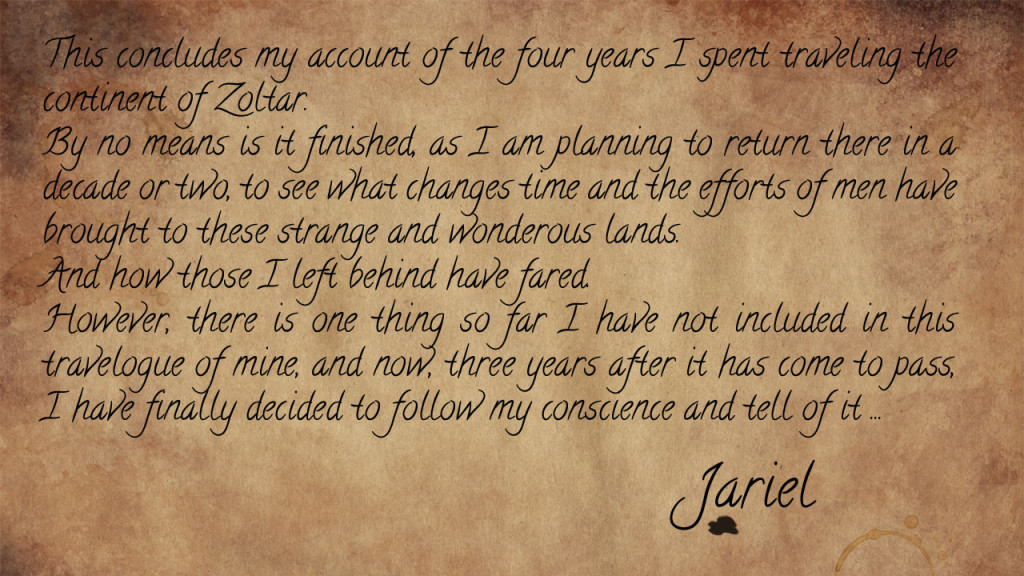 Even if this year was good for me, the future is still very uncertain.

I personally know several indies who this year took a huge hit on their finances, some have abandoned the business to move elsewhere, others went back to contract work or looking for funding. And only a few years before, they were earning six figures! So, you never know what the future holds! Doesn’t matter how much you plan things ahead… because this business moves so fast, is easy to be caught by surprise.

I think the most important thing is to stay humble, never think to have “made it”, and keep working on what you love. At least, this is what I’m planning to do in 2015 🙂 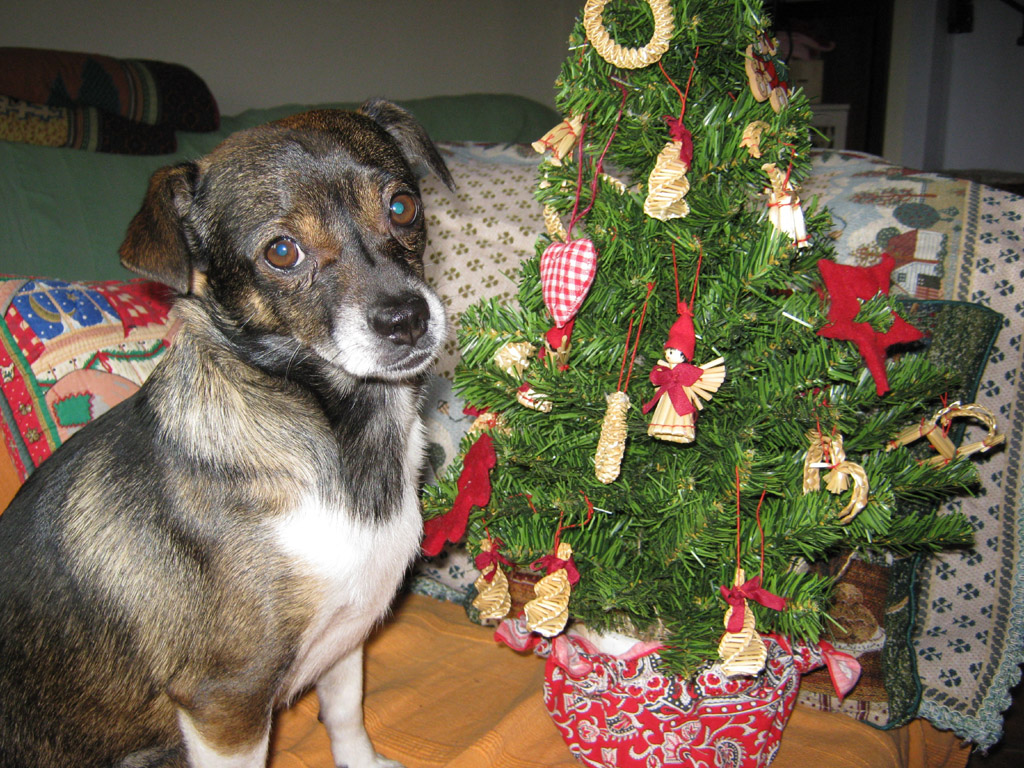 First of all, I want to wish you a Merry Christmas and Happy New Year!

Second, like every year, I’m running a promo sale with 50% discount on all games (except Seasons Of The Wolf) until the 2nd January 2015!

And now some quick random news:

Once again, Happy Holidays to everyone! 🙂 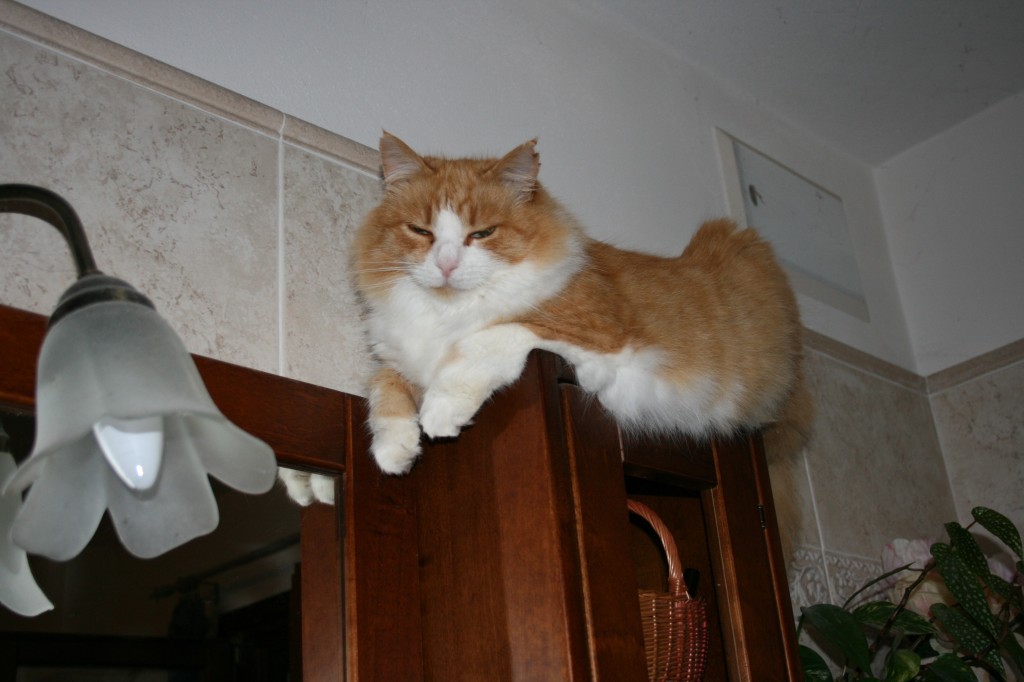 Otello has found a comfortable (?) place in the bathroom…!

Today’s blog post is a bit different. I want to talk about a side-effect of when small indies grow 🙂

Back in 2007-2008, I was doing some “research” on indie CRPGs and of course I’ve checked also Jeff Vogel’s site (Spiderweb games). He’s one of the most famous indie doing RPG, so I was curious to see how he was doing. I was surprised when I read in the official forums that “he used” to post there, but now he doesn’t even show up anymore. I was thinking “What? how is possible, he doesn’t care about his users?!”.

Now, several years later, I understand completely his reasons! When you start growing your business, when you have more titles under your belt, the things to do increase exponentially.

Just think what there’s to do for each game:

– support: that’s the biggest problem. No matter how fool-proof you made your registration/full version delivery, there is always going to be an issue with it. But not just that: hardware configuration problems, sometimes files are downloaded incompletely so people think are corrupted, false antivirus positives, etc. It’s just insane, believe me! Some indies I know have hired people to deal with that, but I honestly wouldn’t trust anyone (since I should give access to orders database, Steam keys, etc). So I do it myself…
– marketing/promotion: I honestly don’t do much of this, but even in this case, there are many things to do. Send press-releases, answer journalists, do interviews, send press-copies, etc etc
– social presence: nowadays is essential, so I try to post daily updates on Twitter, Facebook, Tumblr and so on. Is not a big amount of work each: but if you sum everything, starts to add up (5 min there, another 10 there, etc and voilà hours are gone!)
– game production management: emailing people, checking what they’re doing, etc. Note that I don’t include the actual game coding in this part, and still is big!

OK I’ll stop here, I think you got it 😀 so what is happening is that (luckily) this year was very good for me, but also means that my “free time” has greatly decreased…and I don’t mean to be rude or snob people, but I won’t be able to answer anymore people emailing me “to chat”, or “to know how is going”, or asking “when game XYZ will be out” and so on like I used to do in the past. I simply don’t have the time anymore! 🙁

Of course I’ll still provide support for customers, I don’t plan to disappear from my forums, and will try to reply on the various sites (blog, twitter, Steam forums, etc…there are so many!) but it will depend on how busy I am in that moment.

I also realized that I’m spending really too much time in front of the computer: I want to stay more with family… the wife and pets 🙂

End of the rant! Now, for some quick update on the games, check those screenshots: 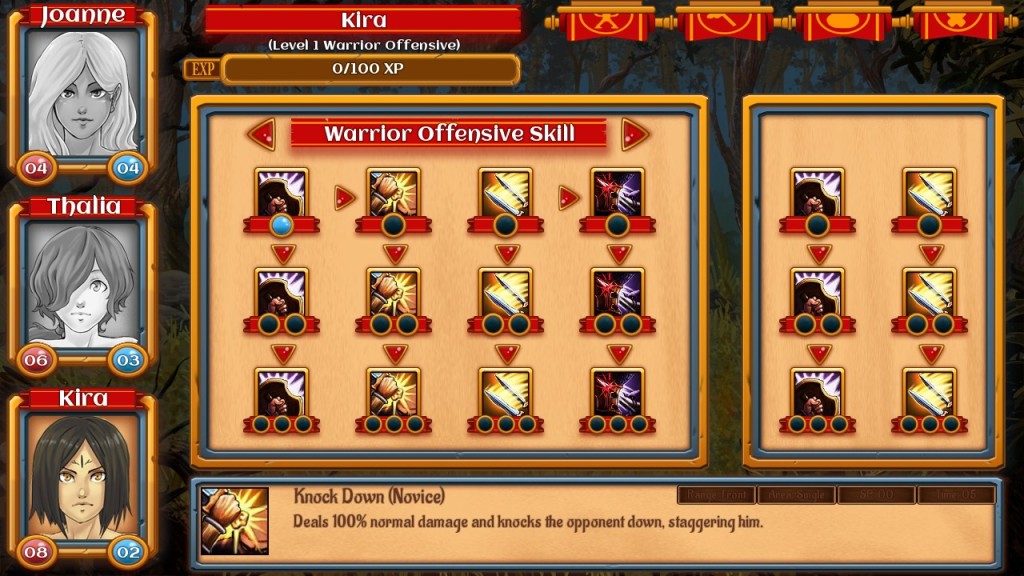 The skills screen of Queen Of Thieves 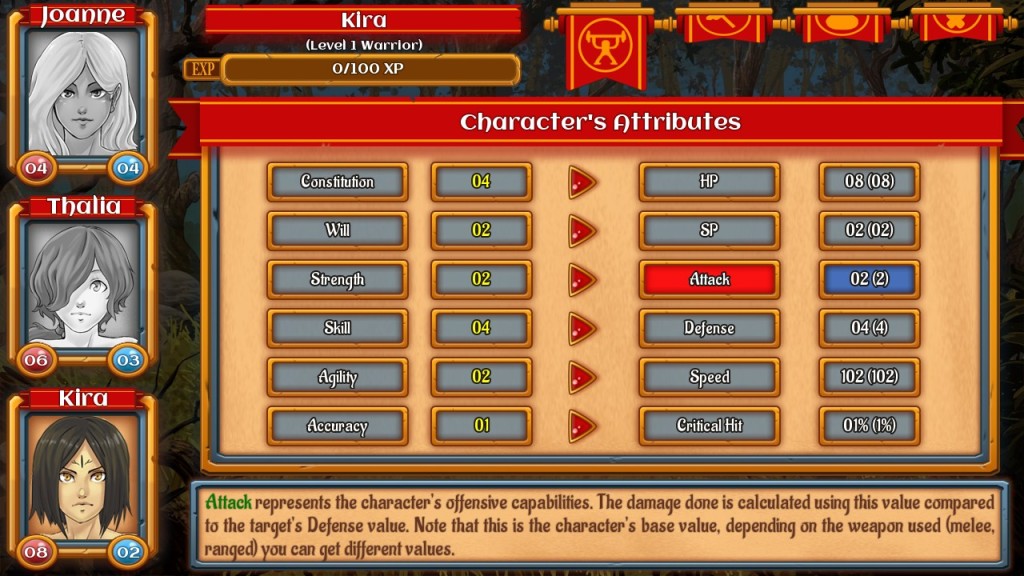 Attributes screen, similar to SOTW one (work in progress)

I got new GUI art done by a new artist who did a great job in my opinion. Is still work in progress but you can see the “return of skilltree” that some players liked so much in Loren 😉

Stay tuned for more info next week…Christmas is coming! 🙂 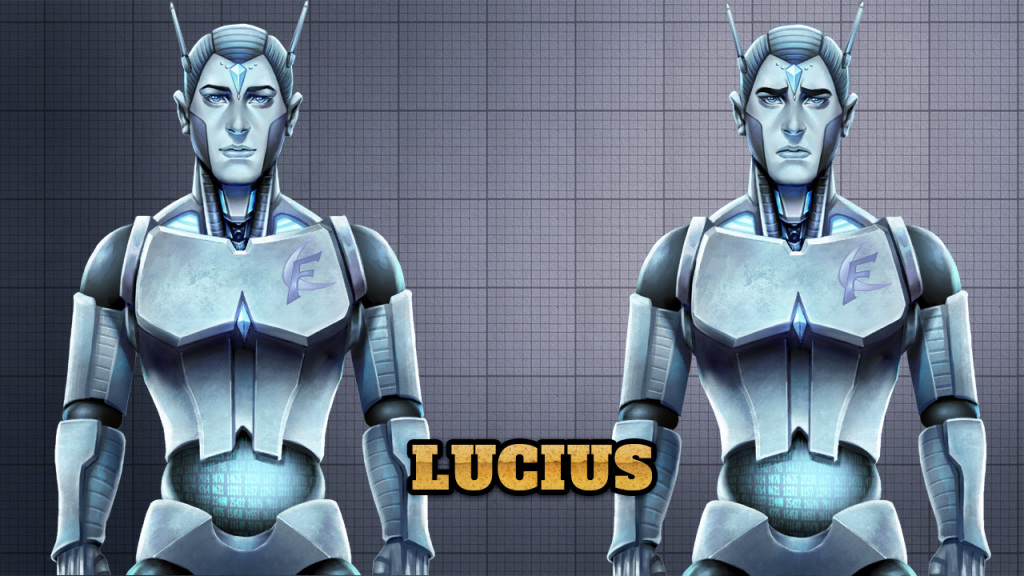 It’s time to talk about the first robotic male love interest of my games! Before, there was only the female Tanya of Bionic Heart that was an android, but she was more human-like. Instead Lucius looks like… a real robot, as you can see above 😉

And here’s more about him directly from the writer:

Description:
Built by Luna-Ferrix Industries, Lucius is a rarity; he is among the first generation of self-aware robots developed by humanity.  This isn’t to say there weren’t robots before as the RoboAnts demonstrate, but Lucius is definitely something on the cutting edge.

Though constructed as a male adult, Lucius is innocent in his interactions with others.  True, he has the accumulated knowledge to draw on, but he has no context to place it.  As a result of this, he is very curious about what goes on around him, and will sometimes place himself in situations which, if he was human, would be hazardous to his health.

Lucius is a direct, if trusting soul, and still has some trouble distinguishing between turns of phrase and direct commands, much as the kitchen staff found out when he proceeded to bake enough pies to fill the cafeteria.

Lucius’ construction also raises some further implications.  Luna-Ferrix sees Lucius as the first in a wave of robot servants and soldiers which will net them a healthy profit, but other people wonder whether it is morally appropriate to allow one’s ‘tools’ to be aware to start with.

However, despite others’ distrust, Lucius has shown himself to be a reliable, loyal person to those around him.

I am quite curious to see what people will think about his “romance story” 🙂 I am looking forward to it!

Progress have been made on several games:
Roger Steel script is now 100,000 words long! Is still not finished, though 🙂 The game will also feature a very particular theme song by Boossara (same singer of SOTW theme song).
PSCD script is at good point too (the main missions at least).
Queen Of Thieves art is being redrawn by artist and I’m very pleased by the results! Just take a look at the picture below, featuring the new female romances of the game: 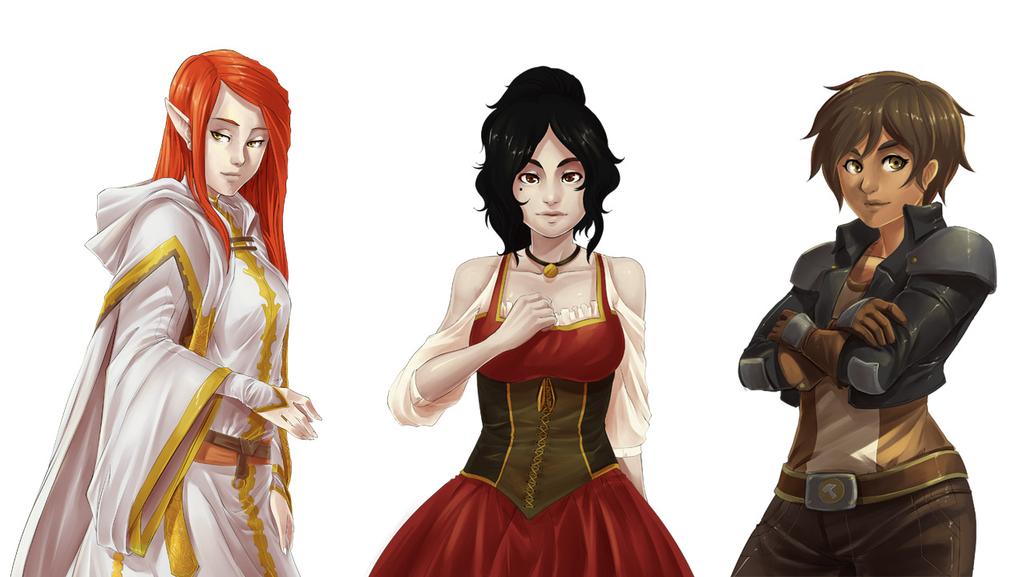 From left to right: Therjalla the elven healer, Moirgane the human bartender and Mary-Ann the human blacksmith.

Story-wise, the new writer is fixing the old script, so this part is going fast (since scenes have been written already, she can change some parts but doesn’t need to brainstorm/spend time thinking what to write for most of it). For the yuri romances I guess will take a bit more time. Anyway this time I want to release the game with both romances genders available, so to not repeat something like Nicole… At least there are “only” 3 characters to write! 😉