Ok just finished to program a big milestone in Supernova 2 development… computer AI during the battles ! 🙂

While not perfect, it offers a good challenge from what I could try on the game. In the last few days I was about to cancel this project or switch to a different battle mode (maybe similar to magic stones, with cards instead of real ships in a battlefield) but in the end I kept trying and I found a decent solution.

Now is all about balancing the game, finishing several custom ships for each faction, and testing everything. I thought I would have been able to finish it by end of february but of course I was wrong 😀 so this time won’t make any statement but I really think that, if I can work as the last week, I’d be able to release it in mid-April, just in time for my birthday… 🙂 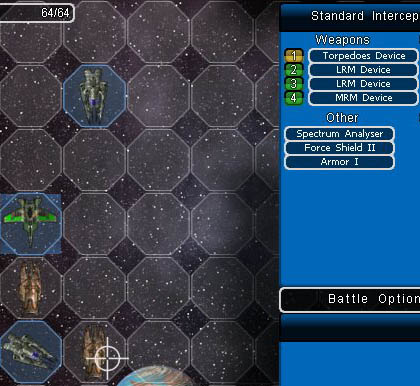 What you can see in the image above is the firing arc in action 🙂 I’m very proud of this last addiction I’ve done in the Supernova 2 battle, because really opens lot of new strategic possibilities for the aspiring star-generals. What is firing arc? each weapon has several statistics, and beside the usual damage, range, etc, there’s also firing arc: in practice determines if the weapon can hit an enemy, using his angle value. In the example above, we’re shooting from the green ship on the left, aiming at the other ship below (the one with the cross-air over it). In the panel on the top-right you can see a list of the weapons installed on our ship, followed by a number and a color: green means the target is in range and weapon can fire, orange means the target is in range, but the weapon firing range is too narrow to hit it, and finally red means that the target is outside the weapon’s range.

I also changed the way you move the ship: rather than a unique straight movement, you can move as long as you have movement points: this lets you use the most maneuvrable ships like the scout to exploit holes in the enemy fleet, moving them in good positions, to strike them from the side or from behind.

I really think there should be very good variety in battles for Supernova 2. Stay tuned for more news!