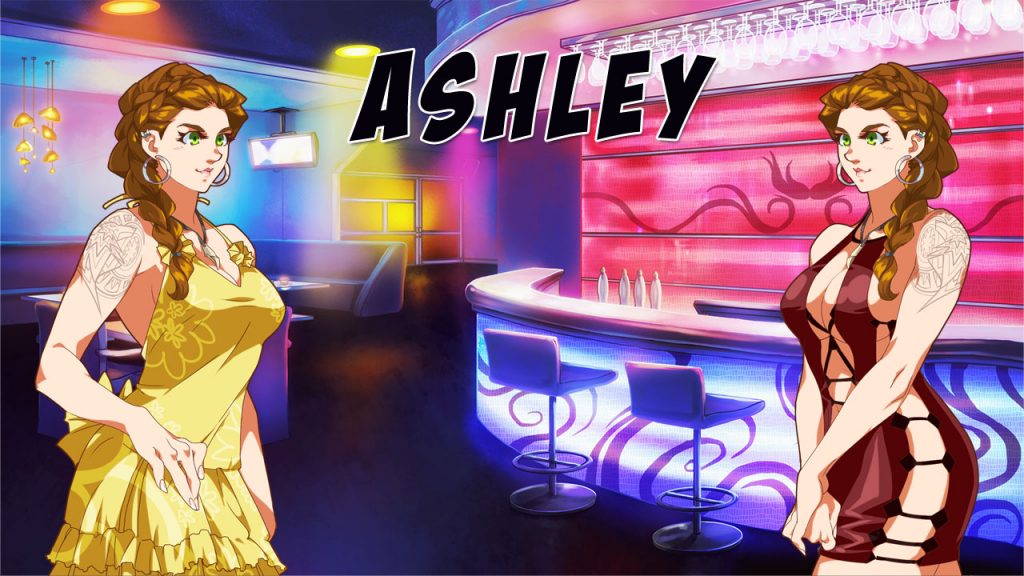 Surprise, surprise! I’m proud to announce that we’re working on a bonus DLC for the game “Love Bites”. And the best news is that the DLC will be included for free in the base game!

The DLC will add Ashley to the pool of the romanceable characters. Since both the writer and I loved her (for the appearance and personality as you’ll read below) we decided that would have been a pity to not add her. Like the other love interests, she’ll be available both to Kaitlyn and Brandon.

Now I can of course imagine that some people will be disappointed that there’s only one extra female, but also for technical reasons (like there simply wasn’t enough space to add more characters in the scheduler! and other things) we can only add one more, and after some recent events (cancellation of Nicole yuri, long time since I made a BxG game) I think if I had to add one character only, it should have been a female.

However, we might explore Love Bites world again in future, maybe in another game, and we’ll make sure to include some handsome boys too. Everything depends also on Rebecca’s (the artist) availability since she’s very busy.

The DLC writing has been already finished, but it still needs to be scripted and tested. I hope to have it ready next month.

Ashley is a soft-spoken, gentle woman who is much tougher than she looks. She has a deep abiding love for nature, and animals in particular. As such, Ashley is pursuing a graduate degree in environmental studies, and hopes to get a job as a botanist afterwards.

However, school is far from cheap, and to curb some of the soaring costs, Ashley works as an exotic dancer. The job is a means to an end, but her family is less accepting. This bothers the normally upbeat Ashley more than she likes to let on.

In such instances, Ashley takes solace in the nearby woods, spending entire weekends communing with nature alone. An avid outdoorswoman, Ashley knows the best parts to go camping, the best place to pick flowers, or the tastiest patch for berry picking. In the great outdoors she feels truly at peace…which should come as no surprise as she is also a werewolf.

Unlike movie lore, most werewolves are not cursed, but born that way. While her bestial side didn’t come as a surprise since her older siblings are also werewolves, Ashley has a hard time reconciling her animal nature with her human side.

Unfortunately, many people can sense when there is a predator in their midst, no matter how well-hidden, and this means Ashley has found it hard to make any close friends, let alone lovers. Those who aren’t put off by her, find they have a friend for life.

This isn’t to say Ashley hates her wolf nature, far from it, but she is learning that sometimes she has to let the wolf loose…or else, it will do so of its own accord, especially when the moon grows full.

In those instances, Ashley will usually head for the woods. While more than capable of defending herself, she’s also learned she isn’t the only person with a secret to hide.

During one incident in which a drunken, belligerent patron decided he could take advantage of a fellow dancer, Ashley intervened…and nearly lost her arm in the process to a young woman with black and purple hair. The woman said she wouldn’t allow Ashley to hunt among her charges.

Things might have escalated, except the dancer came to Ashley’s aid, pointing out how wrong the raven-haired woman was. Embarrassed, the young woman fled, but from that day forward, Ashley kept a closer eye on her friends and coworkers.

For Jacob sadly I don’t have any camp talk image. We did first the love interests ones, and we kept Philipp and Jacob as last. Artist managed to do Philipp but then she was too busy to finish even Jacob. Poor Jacob!

So instead of his camp talk screenshot you can admire in the video above some new nice battle effects I’ve added to the game.

Jacob Miles was raised by androids on Planet Stronghold. He kept his identity a secret from everyone except Captain Nelson: Jacob is half-human and half-alien. His father was one of the last few survivors of the Zhion, an alien race of powerful psionicists. Because of this, Jacob inherited a very strong psionic affinity from his father. He is regarded as one of the strongest psionicists of the whole colony, second only to Rumi Kai.

Even if he is half-alien, Jacob believes that ideals are stronger than belonging to a group. He has no regrets if he needs to fight against other aliens if he believes in what he is fighting for.

While Jacob can be a good soldier on the battlefield, his main interests are in the sciences. He spends every single moment of his spare time in the science labs of the colony, collecting and analyzing data on Planet Stronghold’s bio-diversity.

At the end of the war with the Descorians, he asked to reassigned to the research department where he felt more useful there in times of peace. However, this peace seems to be coming to an end, and Captain Nelson might need his skills on the battlefield once more.

Like all years, the seasons of sales kicks off with Halloween. I’m doing a small Halloween sale on itchio.

There will be one on Steam as well, but I am not allowed to say when sorry! 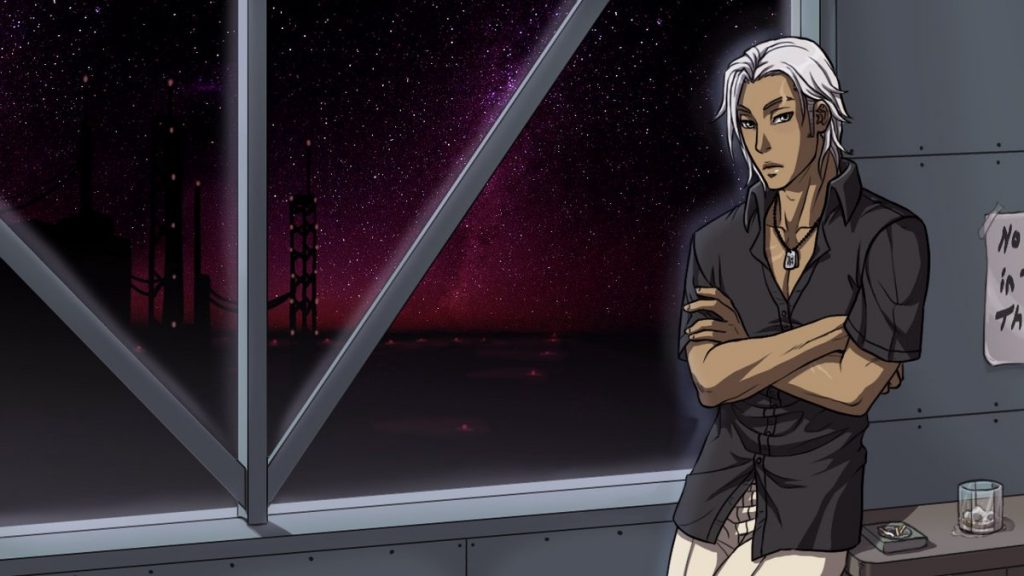 Before joining the army, Tom Shatz was a professional racer. He is still passionate about high speed and vehicles of all types. With modern ships, he likes to turn off the ship AI and take personal control.

Tom strongly believes in the military hierarchy, and will sacrifice soldiers on the frontline to win a battle if necessary. He believes those higher in command have a better picture of what’s going on, and they should be the ones making decisions.

Tom and Rebecca used to date, but that was long before Nelson arrived at the colony Zero-One. Though he may not show it, wrapped up in military matters as he is, Tom would do anything for love, even if he sometimes appears a bit clumsy and inexperienced.

At the end of the first game, Tom was assigned to Colony Zero-Two by the newly promoted Captain Nelson. Tom did so well in the new colony that he was promoted to Captain as well. Nelson and him communicate regularly, discussing matter that only Captains have to face.

I finally finished the crafting screen, that part took me much longer than I thought (sometimes it happens that you greatly underestimate how much adding a “simple” feature as crafting/upgrading might take). 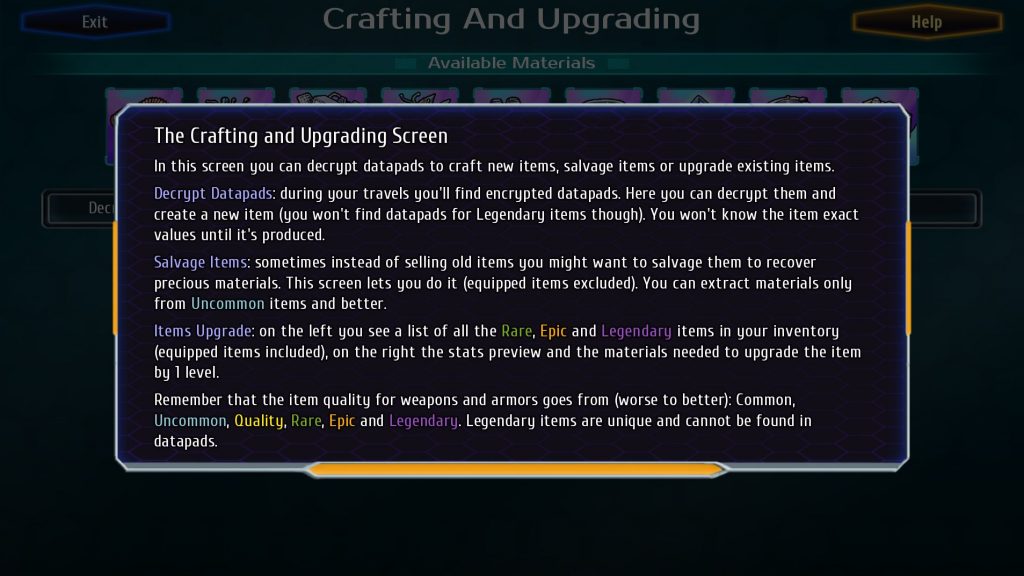 The screen above is the tutorial, as you can see I added also a few other things. Salvaging items to obtain resources is obvious. Datapads work like this: they contain specific item data, you can see a sort of preview of the item but not the exact stats, until you decrypt it. Once a datapad is decrypted, you unlock that item’s blueprint and then you can produce as many as you want (as long as you have enough resources).

This is actually more useful than you might think, especially for armors, or when facing certain battles. For example if you know a boss enemy is weak to Explosive damage, and you have a datapad for an Explosive weapon, you could craft 2-3 of those and equip a good amount of the party with it (of course not all characters could use that weapon).

In general I think the system I made offers a good compromise: I didn’t want crafting to be super powerful, but not useless either. Casual players might even not need it (because the battles will be easier) but I think in Nightmare mode it will be very useful.