In the picture above, Maja when was a kitten sleeping on a mousepad in my “old office”.

What is the unfinished business I’m talking about? Well, lots of games get started every year, and many of them, for a reason or another, are canceled. This doesn’t happens only in the AAA studios, but even at “indie level”.

In the video below, a work in progress of a 3d roleplay game called “Tower Of Destiny”. The project was abandoned about 3 years ago because the coder quit. It should have been a 3d dungeon crawler, with some “outdoor” zones. I think I’ll probably redo it as plain 2d dungeon game sometimes in the future.

In this other video a more recent work-in-progress. It’s the 3d version of one of my older games, Universal Boxing Manager. I didn’t hear back from the coder since June this year, so while I cannot officially say that it won’t be done, I don’t have much hopes as well!

So you might start to understand why I’m making mostly games I can code myself recently? Disappearing artists/writers are a pain, since you need to look for a replacement (and in the case of art, redo even the art that has been already partly done), but when a coder disappear… means the game can’t go on, especially if you’re not able to finish/continue coding yourself or if the coder used a different tool/language you’re not familiar with.

This just to show that being indie it can be a real pain as well, since there are many more problems than people might think. And now, let’s talk about something else…

I’ve updated Bionic Heart to use online activation, and like I did for Heileen 2, I’m offering two downloads: one without voices, which is about 32-35mb, and one with voices which is about 169-173mb!

So I got the first sketches from artist for this new game. As you can see, lots of interesting people… the 6 characters below are the dateable one. Max and Anne are the two main playing characters (the game will be playable as male/female). There are two bisex characters, can you guess which ones? 🙂

Do you think the male characters are sexy/interesting enough? I have no doubts the females are 😀

And for this week is all. Ah no, wait: there are rumors that a certain game with a winter theme MIGHT be really finished shortly… but maybe is just a rumor! Who knows? Keep following me on twitter/facebook/blog to know more. 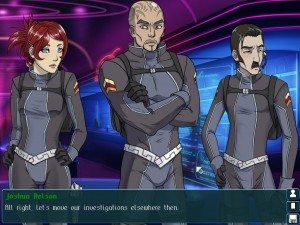 As you probably know, I’m working on a RPG game called “Planet Stronghold”.

I am trying to do something slightly different with this RPG. I would even dare call it “casual RPG”, since it misses some of the classic “hardcore” gameplay elements. In particular:

As you can see it’s quite different from a “standard”, traditional RPG. I hope the direction I took will be appreciated anyway, so far the feedback from the Alpha testers was quite positive (many says it’s the best game I’ve made so far, even if isn’t finished yet! :D).

Note that this won’t mean that the game will be easy. It will be if you choose the “easy” option. But if you pick the “hard” option, in the game you’ll have to face some really tough fights! That’s all for now, I’ll get back to writing more plot and coding more enemy battles.

p.s. For those who like traditional RPG, fear not. My other RPG game in development, the Dungeon Crawler “Tower Of Destiny”, will be much more similar to the classic “hardcore RPGs” 😉

You might remember some time ago I posted some screenshots and even a video of a game called Towers Of Destiny. It was a first person 3d rpg, both outdoor and indoor. However, the project has been put on hold, for several reasons:

But now I was wondering if would actually make sense to make such a kind of game. Would YOU play/buy a sort of Dungeon Master 2010? 😀

I liked those games a lot, but I’ve played them when I was a teenager, so I’m not really sure if I would play them now. There was Might & Magic V on sale at GoG and I didn’t even buy it (also because I don’t have much time to play games anymore). Still, if I have to choose between the tilemap games (think about RPGMaker XP games) or a first person indoor/outdoor game like Dungeon Master, Eye of the Beholder and so on, I would have no doubt which one to pick (the second!).

Sometimes I think about hiring someone to code a simple 2d dungeon crawler game, maybe even in flash so can be played directly in the browser. But is not that easy, even the art required is a lot and needs to be planned carefully (you have to build up the visual with several layered images/tiles for the floor/walls/ceiling).

It sounds complex? It is 🙂 Bah maybe I should hire people to do something else like a classic wargame or another card rpg game (since I love those).

Today I’ve experimented with the Psionic Powers balancing. I raised one of my chars to level 25 (the highest currently attainable in the game) and checked how powerful the stats would be. This way once I know the maximum power of that power, I can simply scale down the effects level by level until level 1 (of course the power need still to be somehow effective even at lower level otherwise would be useless).

Psionic Powers in my game are the equivalent of the Spells in a classic fantasy RPG game. Since I wanted to keep the interface simple, I don’t have 50 “different” spells like in most games. Instead each Power has a value that represent the character knowledge of that specific power, going from 0 to 99 (even if at start of game each Power has a random value from 5-10).

Each Power also requires Psionic Points (which from now I’ll abbreviate into PP) to be used – sort of the Mana points in fantasy game. The difference though, is that rather than having “Heal Light Wounds” and then “Heal Medium Wounds”, “Heal Severe Wounds”, “Heal Critical Wounds”, in my game there is a different (more casual) approach: each Power has a basic “casting” value, but you can spend more Psionic Points to increase its effectiveness. The base effectiveness is influenced by the character level and the knowledge of that specific power.

A few examples with some non-definitive value:

So as you can see, a level 1 character can deal almost the same amount as the level 10 if he spends x 3 of PP. Of course, at level 1, if you use 15 PP you’re left with almost no PP, while at level 10 you still have a good reserve of them 🙂

I think this system will still allow a good flexivity, but without filling the character “grimoire” with 50 powers that basically does the same thing, just in different proportions!

ToD (my friendly way to call my upcoming RPG game “Tower of Destiny”) got a major update today, in the engine (programmer tested it on mac and surprise, works!) and in the maps. I decided to do a “stress test” of the engine by placing lots of sprites over an open space, like a plain surrounded by trees.

So you won’t face only grey cities, unholy graveyards and zombies, but you’ll be also able to relax in a more bucolic map. The engine was going slower with that amount of sprites to render, but isn’t bad considering: a) is still work in progress so can be optimized, b) the engine is running in debug mode, so the speed is already slower than its true potential

For the record, I’m surely not talking about a powerful/complex engine 🙂 But it’s enough for the kind of game I have in mind. I’m sure players’ attention will be drawn by the enemies, the gameplay and the variety, but a nice art doesn’t hurt!

You can see a screenshot and a video below: 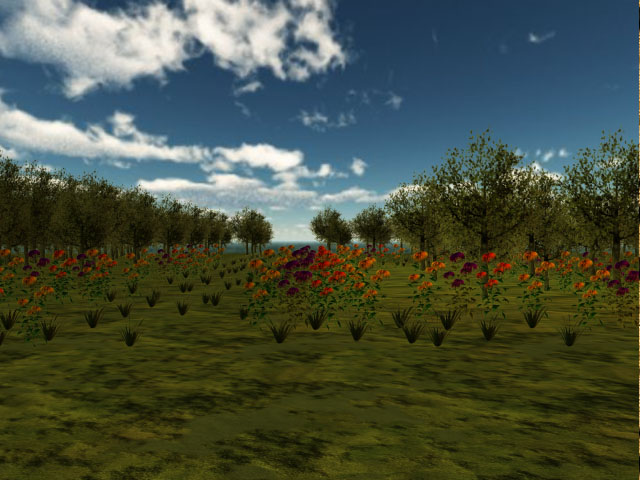