The Year Of The Tiger

I just discovered a fun thing. One of my best collaborator, Ayu Sakata (Flower Shop’s writer, voice actress / proofreader in Bionic Heart, Heileen 2 and more) and I are both of The Tiger in the Chinese Horoscope. This means that this is our year! 😀
It surely started well with The Flower Shop who is getting a positive response and nice reviews everywhere.

Now she is working on editing what should be my next game (unless I manage to finish Vera Blanc first but I doubt it). It’s a manga visual novel / strip poker game called Card Sweethearts. I started this project last year, asking Ren’Py main programmer Tom to create a poker engine out of his card game system for Ren’Py.
The poker is the classic Texas Hold’em, and will become a classic strip poker (featuring only tasteful images though) when you challenge one of the four girl depicted in the title screen image below: 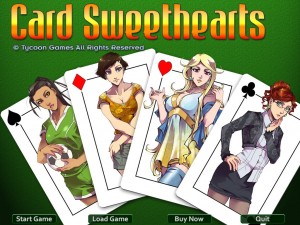 I absolutely like how Ayu is reworking the original game texts (written by another collaborator of mine who had to quit). Just read at Tobias description of Miko, one of the four girl you can pursue in the game and my personal favourite:
“You mean Rocco? That old guy ain’t much, but his woman Miko. Now she’s a fine piece of work. Hottest thing out of the orient since they invented gunpowder.”

Below a in-game screen featuring the poker part. That is really fun, and is cool how it integrates with the story itself. The game will also feature a scheduler like my other dating sims where you’ll be able to decide what to do with your week. 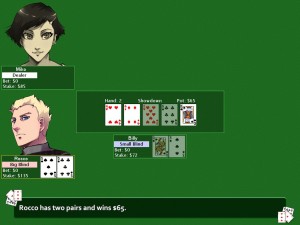 So basically I have in production (or planned) the following games for this year:

It’s going to be a very busy year as you can see!

10 Responses to The Year Of The Tiger