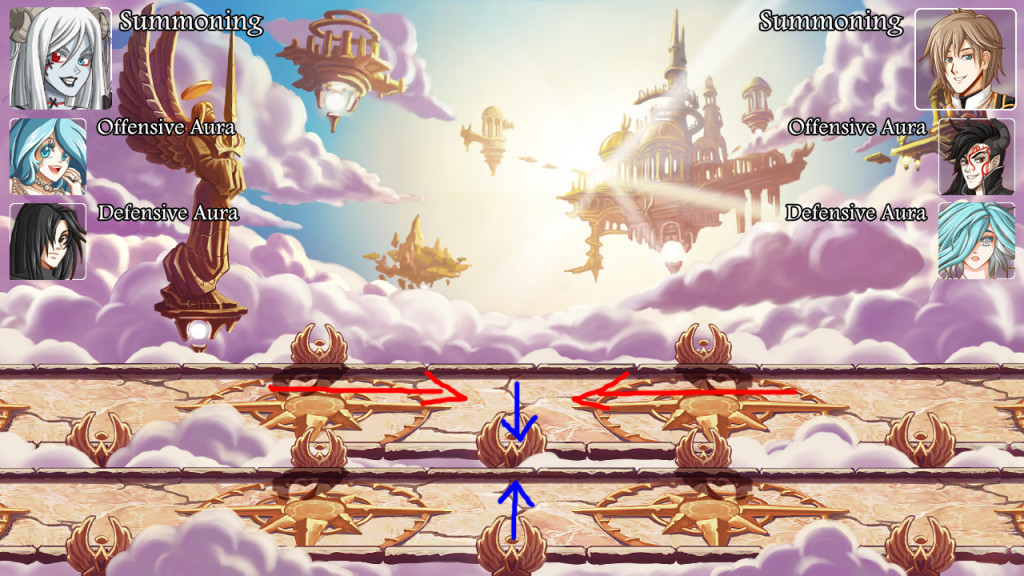 This is a mockup of the battle screen I made yesterday

How is Undead Lily going to play? I think the best definition is a mix between a strategy game and a RPG. I mentioned CCG (Collectible Card Game) before, but to be fair I don’t plan to have 200+ cards/avatars like those games do 🙂

Current plan is: at start of the game there’s a world map (being the underworld will be particular) with the two opposing factions on the extreme spots. The map will have a terrain, meaning that each cell will be linked to one of the 6 elements of the game: Life, Death, Nature, Fire, Water, Air.

There will be some “Power Nodes” cells, that once captured will give you more power (have yet to decide how it will impact the game). Capturing / conquering all the nodes would give victory to one side.

There are 6 characters on each side, and you can bring 3 to battle at time. I’m thinking that the main character (Undead Lily & Ace) must always be present, while you can decide who will be the other two battle members.

During the fight, there will be 3 roles: Summoning, Offensive and Defensive Aura. The character with Summoning role will be able to summon the avatars on the battlefield. The other two will provide a permanent bonus for the battle. For example in the screenshot above: Undead Lily does the summoning. Aquaria will provide a bonus attack to all targets, Ash will give a fire shield to all your avatars so enemies hitting them will suffer damage.

Still thinking if to allow the player to switch the superheroes role during the fight or not.

Thanks to the writer for this suggestion, it was very interesting ! 🙂

The bonuses will scale up as the superheroes gain more levels.

Of course the fights will be simplified, not like Loren. All the cards/avatars will attack the enemy in front of them (with some exceptions) and once they kill it, the next attack will hit the superheroes behind it. A mechanism common in those card/RPG games. Once all the heroes of one side run out of HPs, that side has lost.

So that’s the plan right now 🙂 there’s a small problem though: the battle screens were done by the artist, following my indications, so that there would be a lower part of it that would fit a one vs one battle. That means that it would be a bit problematic to fit a small army of 5-6 avatars.

I’m currently thinking if to put the avatars in rows facing top to bottom (blue arrows) or left to right (red arrows). The blue arrows would be the more logic solution, but the problem is that I want to have the superheroes on the left/right side of the screen, so I think that might look awkward to have the avatars fighting top/down and the superheroes left to right 🙂 Anyway, that’s not a big problem, the hardest part will be to design all the avatars and the battle rules. But that’s also the most fun part 😉

One Response to Undead Lily gameplay