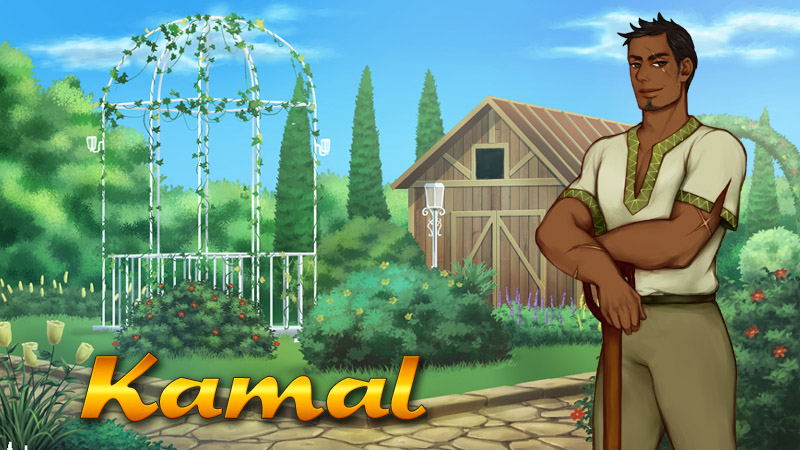 Time for another Heirs & Graces character introduction, this time the ex-gladiator Kamal. One of my favorite characters of this game 🙂

Before being employed by Lord Sandor, Kamal sought to make a name for himself fighting in the arena. He genuinely loved honing his skills and battling against powerful opponents; getting paid for it was nice too. If he had continued as a gladiator, Kamal could have easily become one of the best. However, after an incident in the Dingirra arena, Kamal’s feelings towards his job as a gladiator turned sour. He still appreciates a good fight, but he has no desire to return to the arena. Luckily, Kamal didn’t stay unemployed for long. Lord Sandor witnessed his last battle and decided to hire him on as a body guard.

As it turns out, Kamal isn’t exactly the ideal servant. He has a problem obeying orders from people he doesn’t respect and will outright refuse to serve nobles if they’re rude to him. This has caused a few incidents in the past, but Lord Sandor has no interest in firing him. If anything, this behavior only amuses him– though he’d never admit it while he’s keeping up appearences.

It does cause a bit of a headache for Lord Sandor’s butler, Vincent, though. To avoid incidents, Vincent has Kamal work outside where his interaction with nobles is at a minimum which is more than fine by Kamal. He enjoys spending long periods of time outside and has taken up an extra job as Lord Sandor’s gardener to help Vincent out. Though they may seem an unlikely pair, Kamal and Vincent are actually friends due in part to the fact that they’ve both worked for Lord Sandor longer than any of the other servants.

Kamal tends to keep his sentences short, but that doesn’t mean he dislikes company. He’s actually quite friendly and often perceives people’s needs before they need them. Kamal is almost always calm and laid back which may make him look lazy to some. However, that’s not really true. He gets everything done at his own pace and can put in a lot of hard work if it’s actually required. He just doesn’t see the need to rush.

In other news, today got the colored sketches of “Bad Blood” (the new SOTW DLC) CGs, so I think I will begin preorders next weekend! Stay tuned for more info 🙂

One Response to Heirs & Graces – Kamal