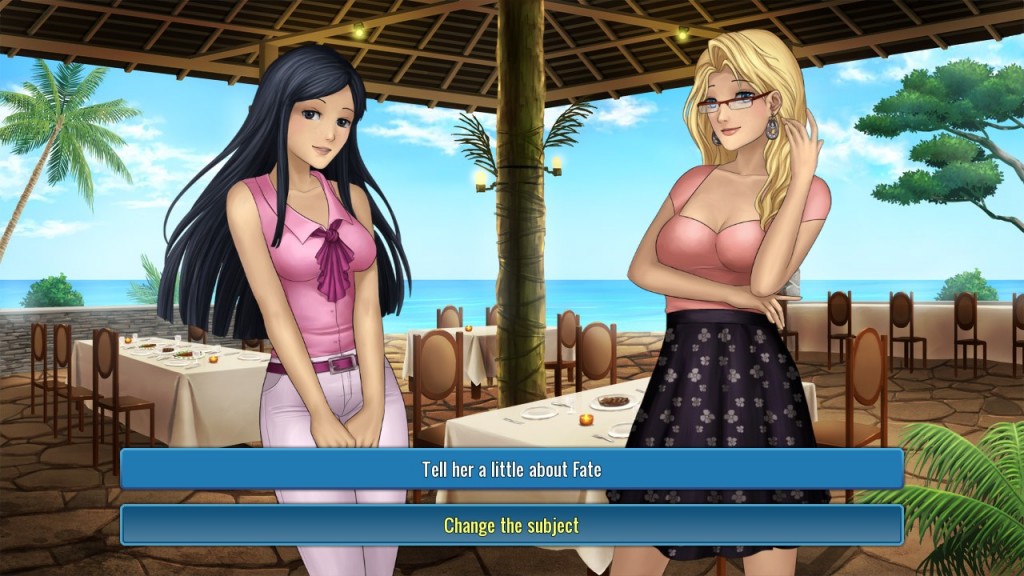 I’ve noticed that I never introduced the main character of Summer In Trigue: Sybil herself! So here’s the Sybil official introduction by the writer:

The protagonist of Summer in Trigue, Sybil is a young woman with a very particular view about fate. Back when she was a child, Sybil often noticed a lot of strange coincidences occurring in her life. Her friends told her it might be fate or destiny, but Sybil didn’t believe such things actually existed… not at first that is. Now that she is an adult, Sybil has become convinced that Fate with a capital F does exist, and that it hates her guts.

Or, at the very least, she feels it enjoys playing oftentimes cruel jokes and tricks on her, as shown by the fact that the “strange coincidences” have continued to occur with alarming frequency throughout her life, and have often been unpleasant and oddly specific. Sybil has developed a strong sense of determination and perseverance by weathering all the stuff Fate has thrown at her. No matter how many times life beats her down, she gets back up, usually a bit stronger, and perhaps a tad bit more paranoid as well.

Sybil can sometimes be impulsive and rash, as experience has shown her that all the best planning in the world sometimes doesn’t matter, and she wonders if doing something spontaneous sometimes makes it harder to Fate to mess with her. She has a very morbid sense of humor and a moderately active imagination, and sometimes indulges both when people piss her off too much. But she is very much a good person at heart, just someone with a few quirks.

Before her arrival in Trigue, Sybil was quite happy with her life, as she had a stable if boring job, a loving girlfriend, and a nice apartment. Those were enough for her, plus she was very much looking forward to her and her girlfriend’s planned two week romantic vacation in Trigue. After her arrival in Trigue, with Fate having reared its ugly head again, Sybil is initially sad and angry and alone. But she is hopeful that maybe she’ll catch a break for a bit, and the vacation will go smoothly and give her time to recover.

Sadly, she has no way of knowing she doesn’t star in “Two Weeks in Trigue”…

The other games are making progress steadily. I am still somewhat unable to work reliably because of heat and some life problems: had a cat with health issues, had to drive around town, etc. I’m starting to believe in Fate like Sybil! 🙂

This entry was posted in dating sims, development screenshot, Summer In Trigue. Bookmark the permalink.