What is “Cursed Lands”?

This week I got a big chunk of writing for my new game, Cursed Lands, from the writer, so I thought to make an introductory post about this game.

What makes it a bit different from my other RPGs, is that in this case there’s a bigger roleplay element, like the “character creation” phase at beginning of the game. There will be fights, but with some new gameplay elements. It’s much more story-based, since during the fights themselves you’ll be able to interact with the enemy, allies and environment, to change the battle/situation outcome.

In many cases you’ll have to make a “tough choice”. No compromises, just pick one of the two option, with different consequences.

Anyway, I thought to make a nice image as summary of this game romances: 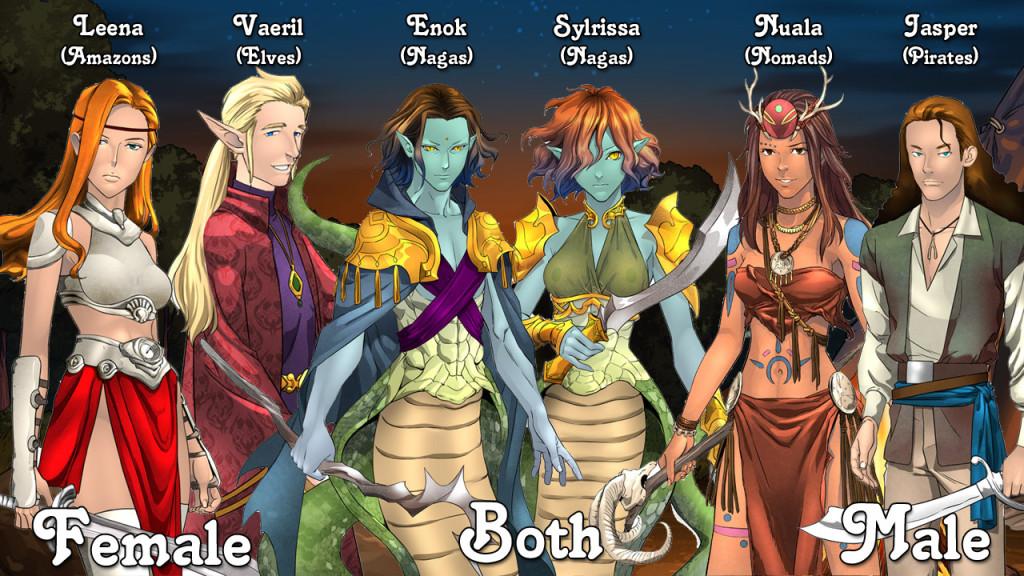 Forgive me for the low quality but I made the mockup quickly using JPGs instead of the original images, so there might be some white borders. The in-game art will look great as usual! My favorite character is Nuala, even if both Nagas are awesome of course. What’s yours? 😉

I don’t want to reveal much of the story for now, however I can share the initial premise, from an early draft the writer sent me:

The game takes place over the course of four “months” or cycles of the moon. The game begins with mist covering the area from the Castle of N’mar. The mist particles reflect light by day, causing blindness in those who spend too much of the daylight hour in the mist, and by night, it is too dark to see. Thus, the human empire responds by sending an army to investigate, coincident with the full moon; they can see by the light of the full moon without being blinded.

The game takes place in the year 653 since foundation of Grimoire (the official dating system of my fantasy world of Aravorn), so 13 years before the events happening in Loren Amazon Princess. Queen Karen will play a major role in the story (no, you can’t romance her!). If you’re curious, here’s the current Aravorn timeline: http://aravorn.com/index.php?title=Timeline

The cast is quite interesting and varied. The romances are only those pictured above (so don’t ask if someone else can be romanced!! lol), but there are also other characters that you can recruit for your main quest, max 1 for each race or guild/ethnic group. I’ll make a short introduction here, with a portrait and a phrase from what I’ve read so far that I found interesting/representative of that character:

Galan (dwarf berserker)
“I know that I’m no hero.  Sometimes I like to pretend that I am.  But when I jump into the fray, telling myself that I’m doing justice by defending the weak, I’m really lying to myself.  Because the truth is, when I get into a fight, it’s for one reason and one reason only: I like to fight.”

Dasyra (dwarf healer)
“I never fancied myself a fighter, but in that moment of combat, standing by your side, it was like I was operating in a higher state of consciousness.  It was like I became suddenly aware of my own mortality, but also aware of the mortality of the men who were attacking me.  Everything else, the entire world of worries and stress I’d been carrying until that moment, they all ceased to be relevant.”

Kusho (elf assassin)
“So you’d have me working as part of a group?  Well, solo work really is my preference.  But infiltration sounds right up my alley.  I imagine the castle of N’Mar is ripe with hiding locations.  That architecture is ripe with nooks and crannies.  And shadows.  I do like shadows.”

Vaeril (elf druid)
“You’ve just met me.  It seems a bit premature to judge my character when we’ve had not more than an hour to share words. Some will have drinks with a man one day, and slay him the next.  You can’t judge the body of a man’s character from a single act.  You know nothing of the sins or virtues of my past.”

Lady Geraldine (merchant)
“Do you want to know what I think?
The needs of the living outweigh the needs of the dead.  Give the dead their respect.  But don’t let them occupy space that could be put to better use.  The memorial can always be rebuilt elsewhere.”

Cedric (merchant)
“The truth is, a symbol like the Tomb of the Unknown Soldier means more than a profit-minded woman like Geraldine could ever hope to understand.  An officer realizes there are things more important than money.  Loyalty.  Duty.  Honor.  Those are the values that we prize above all else.”

Sylrissa (naga blademaster)
“If I ever met a vampire, I’d very much enjoy having the chance to dance with them, and then have a pleasant chat with them, and then slice them up a bit with my blade. No better way to get to know someone than from the inside out, eh?”

Enok(naga battlemage)
“Nagas have very few rules when it comes to killing. Anyone who steps into naga territory unwelcome is likely to made into a meal. Naga kill all the time, without provocation.”

The pirates, amazons and nomads are missing since the recruitment scenes for them haven’t been written yet.

I’m quite excited by this game, also for personal reasons: back in the years 1996-1997, I already wanted to make games, but was still too young and inexperienced. However I liked to dream, and so I started to design on paper a game, which was called indeed “Cursed Lands”. Now, almost 20 years later… 😉

This entry was posted in Cursed lands, roleplay games. Bookmark the permalink.