First of all, public service announcement: after a month of very intensive testing, my dating sim with optional crafting gameplay Amber’s Magic Shop it’s finally out!

You can download a demo and get more info at the game’s official page: http://winterwolves.com/ambersmagicshop.htm

As usual, if you buy from my site you’ll also get a free Steam key once it’s out there (not sure yet when, but should be in the next months). A mobile version is also planned and should be out probably around June on Android, followed by the iOS version later.

Today I also wanted to talk a bit about what I’ve learned in the past months. As you know I like to try different things. This lead to two “experiments”: Queen Of Thieves’ randomized missions, and Amber’s Magic Shop crafting simulation.

While I know many people who liked both games gameplay, I am the first to admit that the result was less fun than I originally planned. Talking with people in forums and other devs, I think I found some basic mistakes I have done:

The conclusion I can draw from those observation is simple: if I decide to try again doing a game with more different gameplay, I should really either have a beta prototype to get early feedback from players, or at least code it myself first, and then worry about the story later. Otherwise, the final result it’s never going to be as good as it could have.

For VN/RPGs the thing is different, since you can tweak the battles as you play/read the story, that’s what I did both with Loren and SOTW, and both games are the ones which got more praises for gameplay. Same thing for PSCD, which probably has the best gameplay of all my games (unless you really hate card games…!).

In summary any kind of game that has a story mixed with combat/fights at certain key point of the story it’s safe to do for me. For other kind of games, I really need to try a different approach, to have a better final result 🙂

Last but not least, Love Bites coding/playtesting is progressing well. Below you see a fun scene where Brandon tries to invite Viktor to dance 🙂 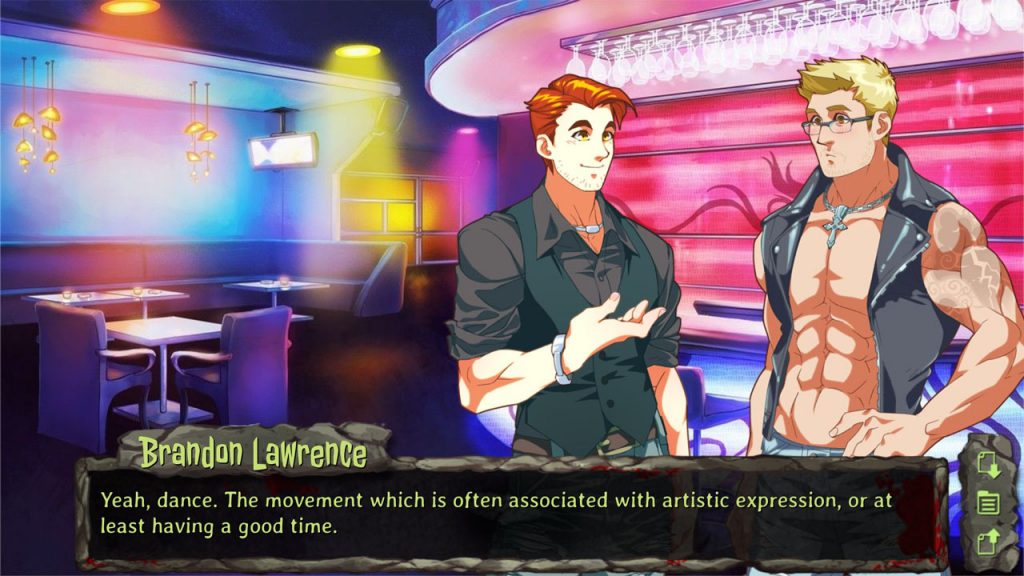