Last time I said I was hoping to bring some good news, and here they are! Let’s proceed in order.

If you missed my announcement in the social media, a beta version featuring the full first chapter except the Nagas rescue mission (until the end of first full moon) is now available on itch.io here: https://winter-wolves.itch.io/cursed-lands

All the usual disclaimers apply when talking about a beta: savegames “should” be compatible, there WILL be bugs (but if you tell me about them I’ll fix them), I might tweak things (not story-related though). As of now I haven’t added a “visual novel mode” yet, though you can always try playing in Easy mode. 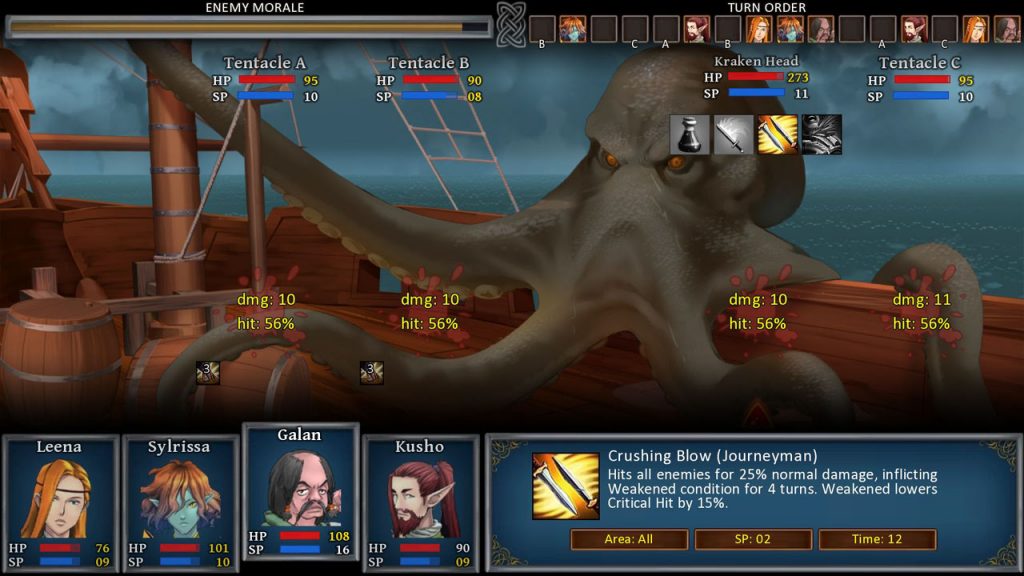 Meanwhile I finished coding some more stuff for the second chapter, including an epic boss fight against the Kraken! It’s optional, so you don’t need to do it, but it’s very hard and has probably the best loot reward of the whole game: 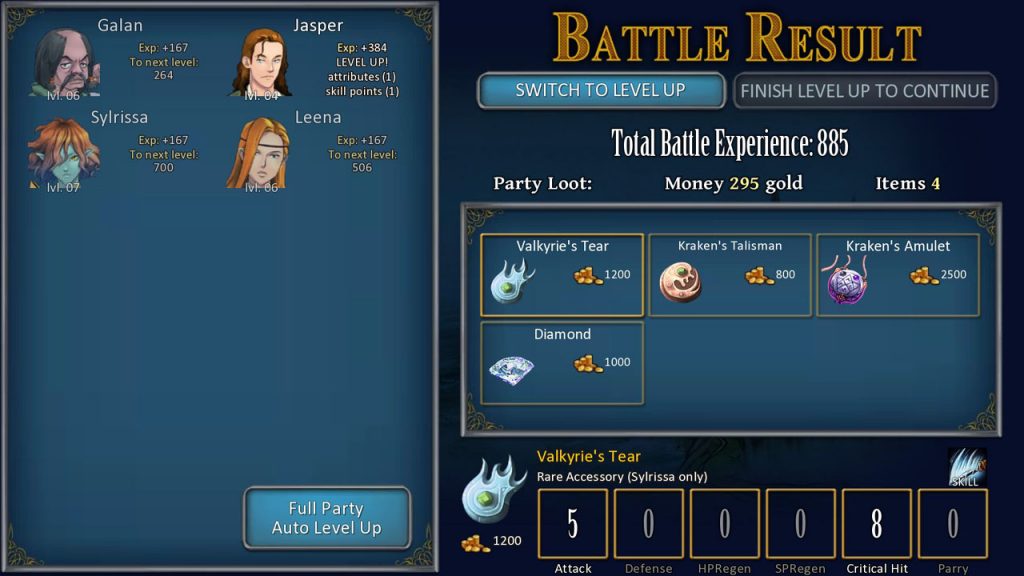 So might be worth trying, don’t you think? Especially if you like to use the two nagas characters (two items are exclusively for them).

Currently I’m waiting for the writer to send me the new texts necessary for the second chapter, however as you see from the images above, I have already coded a LOT of things: all the rescue missions, the kraken fight, a tomb exploration sidequest, etc etc. It has the biggest amount of content of all the three chapters probably. Of course being an “open world” rpg, you don’t necessarily NEED to do all those quests in the second chapter, some can be completed also in the third.

As soon as writer sends me the missing scenes I’ll update the beta again, unlocking the whole second chapter. For now, have fun with the first 🙂

Things are progressing well for this game too. The “half-game” beta shouldn’t be much away from now! Not sure about the exact release date yet, but should be out before Christmas, with the final/full game out first quarter of 2018.

Haha yes you read it well! Since I am now waiting for Cursed Lands’ remaining writing, what there is better to do than start working on another RPG!? Jokes apart, yes, I think it’s a good idea for two reasons: first, I’m in “RPG design mode”, I am working with the RPG framework code, so I’m fresh / familiar with it, and second because it’s about time to finish that game (I announced it back in 2011-2012!).

As I posted in forums, I’m going to plan the ruleset, gameplay etc, still using the good old framework but once again, it will play differently from the previous RPGs. I’m planning to try having randomized items again (like in Seasons Of The Wolf, since it seems players liked it) but still have only 2-3 equipment slots each character to reduce micro-management. Anyways it’s still early days but managed to update the old character creation code with the new GUI and I think the result it’s very good: 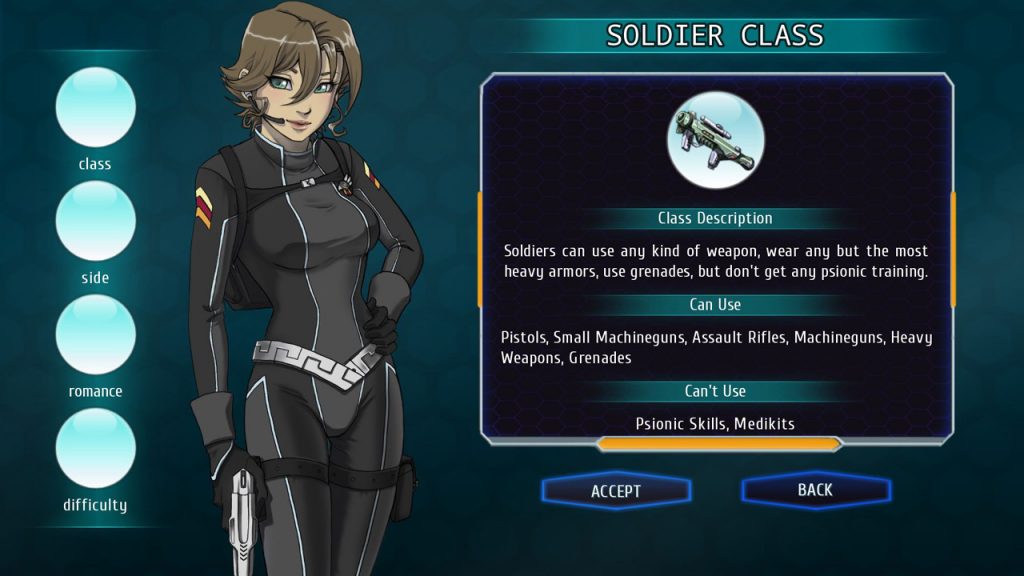 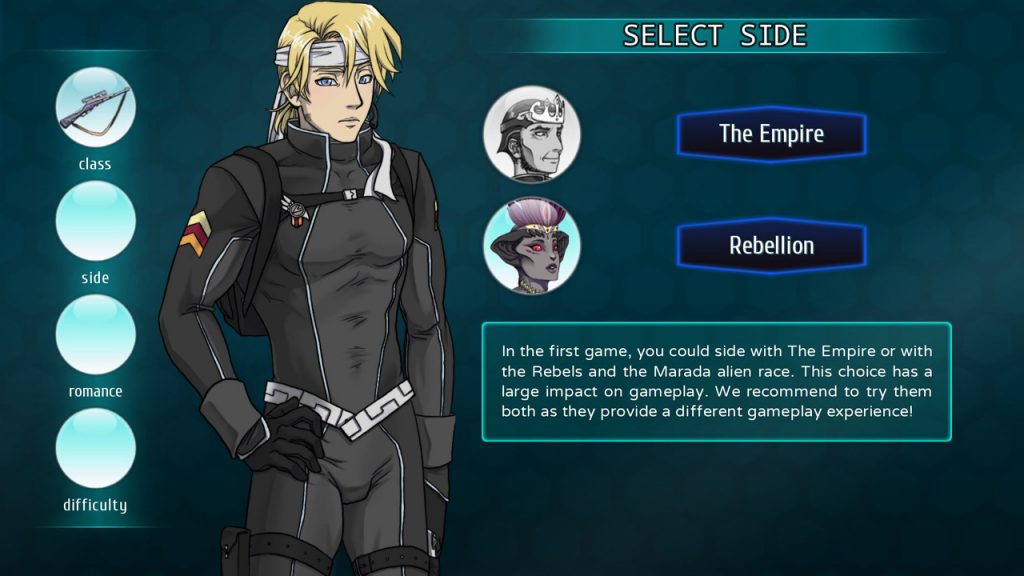 Choose your side at start of the story

As announced at beginning of the story you’ll be able to choose who you sided with (Empire/Rebellion) and who you romanced (if any) in the previous game.

This will inevitably require a lot of branching in writing the story so I’m doing this part myself, but of course will ask the help of Miakoda (who wrote PSCD) for editing/proofread and writing the new romance scenes. I’m only writing this first part myself since it’s going to be a pain with all the gameplay and multiple beginning/branching!

Obviously there’s no estimate release date, I’ll just work on it whenever I’m waiting for the other two games currently in active development above. But at least I’m not wasting time 🙂