What is Bionic Heart 2 ?

I realized that I always talked about Bionic Heart 2 like if everyone played the first game. By the way, if you haven’t, you should since I lowered its price to $9.99 and even if was one of my earlier games, the story is still one of the best I think 😉

Anyway, for those who haven’t played it, I’ll introduce the game. Warning there are some small spoilers about some endings/characters of the first game, so be warned before you continue reading!

The story takes place after the “Escape to Mars” ending. It’s the 2099 and Luke, Tom and Helen are chased by the ruthless Richard Meier IV, CEO of Nanotech and a very influential man who can bribe the entire London media and police. Tanya, a robot with the brain of a woman who died a century ago, escaped from Nanotech and wants to find out more about her past and take revenge against Richard.

Tanya provides Luke, Tom and Helen with fake ID and they board the first shuttle to the secret colony of Mars. They are safe for now, but what lies on Mars? Who are those people doing there, and why it’s kept secret?

So we have two parallel stories: on Mars and on Earth. The game is told using multiple point of views, so you’ll play the Mars storyline from Luke or Tom point of view, while the Earth one will be played by Tanya and Tina point of view.

Tina Gomez is one of the few police officers that aren’t bribed by Richard. She’s just a small ordinary street cop: 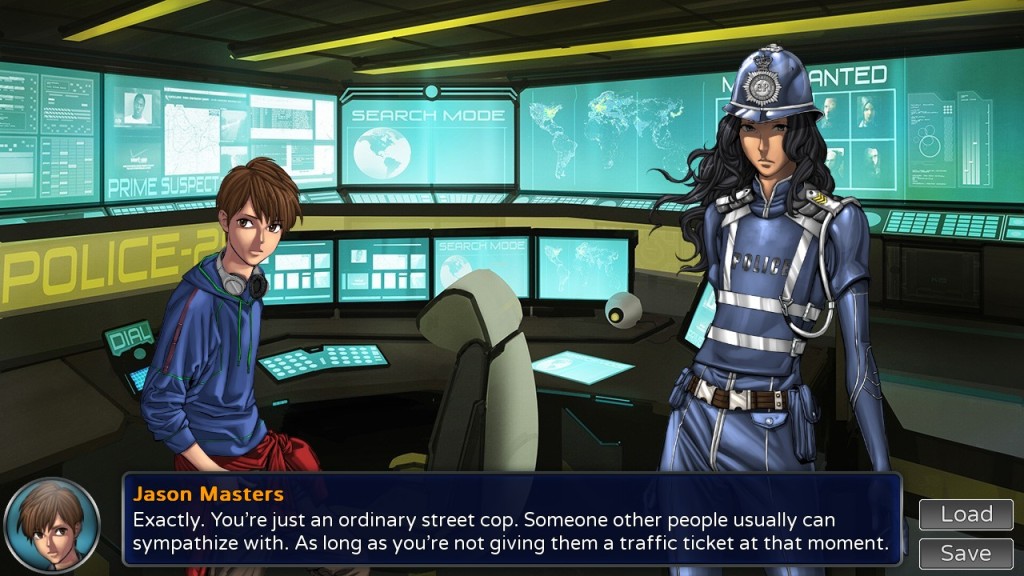 and together with her partner Robert Carson, they have strong suspects about Nanotech and want to find out more.

The game is structured in a way so that if you lose one story, the other goes on. You can have 8 different ending both for the Mars and the Earth stories, though some of them are just variants of the same ending. If you manage to finish both plots, you’ll get an extra 9 “combined endings” that are the hardest to get.

The cast of playable characters

I’ve already introduced Tina Gomez. She is very ambitious, her main goal is to get promoted and she hopes to do that by discovering what Nanotech is doing.

Luke Black was the main character of the first game. He is a good looking man in his 30’s, and apparently he’s calm, he’s rational, or at least he was until that night when Tanya knocked at his door. In the story, he’ll have several tough decisions to make. Does he still love Helen, or not? Will he be able to reunite with Tanya? He is the character with more interior struggles, one of the most complex of the whole game.

Tanya Vanic is a unpredictable character. Her new robotic body gives her superhuman powers. It will be up to her to decide how to use them. She can become a deadly killer, or only try to discover the truth behind her past. Who she was before they turned her into a robot?

Finally, Tom Sparks is Luke’s best friend. He often tells bad jokes, so nobody takes him seriously. He is secretly in love with Helen, so his plot will be mainly about the question: is worth breaking his long friendship with Tom for Helen? and does Helen love him?

What are Social Boss Fights ?

In the first game, I had some “interactive scenes” where you could move and had to choose action like in an adventure game. In this sequel, the game uses a classic visual novel gameplay with choices, except for one thing: the Social Boss Fights! 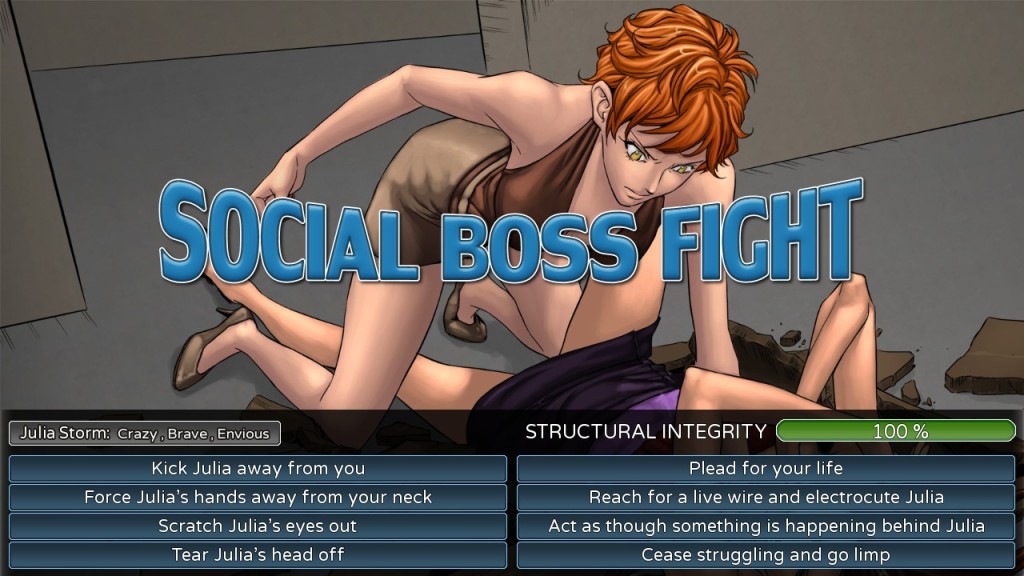 In the image above you see one of the toughest “Social Boss Fights”. Tanya isn’t in a good position 🙂

The Social Boss Fights are minigames in which you must pass a sort of test/escape a bad situation. You’ll need to convince a person about something, escape from someone, and so on. You’ll have to do that finding the right sequence of answers to give to the “enemy”, before the time runs out.

Each boss fight will have slight variations: in all of them you need to pick the right order, but in some you can choose the strategy to use, in other like in the screenshot above you’ll have a counter (structural integrity) that will go down, and so on.

In all fights, you’ll be able to see the personality of the antagonist (in the screenshot above, Julia Storm) described with 3 words, that should give you some hints on what could be the right strategy to choose.

All right I think now you know a lot more about the game. I’m in “crunch mode” trying to finish it as soon as possible but probably will still need a week or two!

3 Responses to What is Bionic Heart 2 ?