What last missing piece you ask? Well, yesterday for real-life reasons I had to commute for long distances, so I spent a lot of time thinking. An activity that probably I should do more often 🙂

So, I thought that making games is like making a puzzle. You need all the pieces to finish it, and like puzzles, there are pieces that fit immediately, and others that take long time before you’ve found the right spot.

A bit is for gameplay design reasons. I had to experiment a lot with the RPGs, but even for simpler games (at least apparently) like dating/life sim, quite often I have to tweak the screen layout and system for days or even weeks.

For example you might remember the old look of the scheduler for Nicole from last week post. Now look at the new version below: 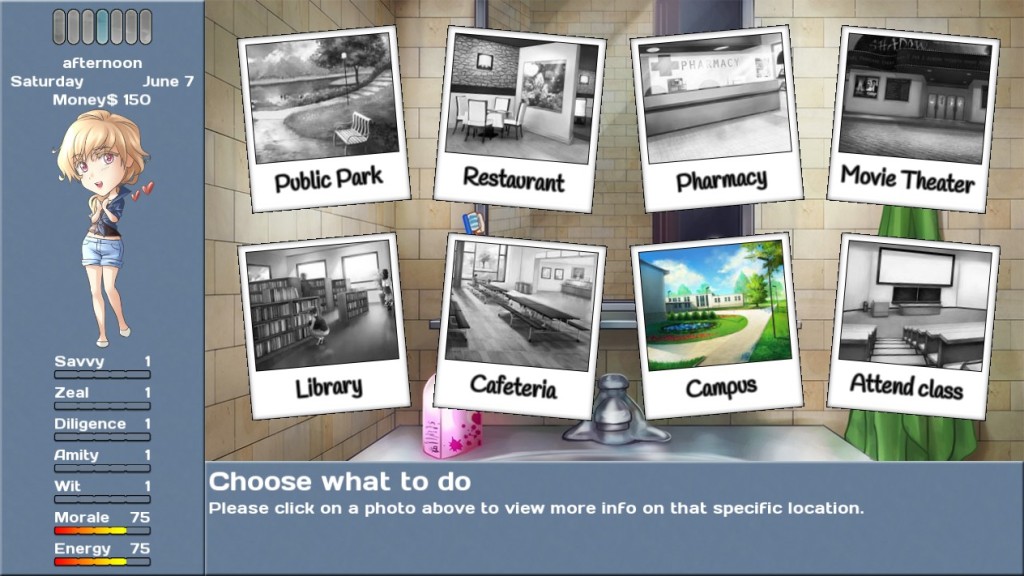 Much better now! I eliminated the top title and made the photos look like Polaroid so four could fit on each row, and the text doesn’t overlap the image anymore. Small changes like that might seem obvious but still take time to design and code.

But the most important thing, is to have all the needed pieces/parts/assets for a game!

I am doing several projects at once (probably too many) but there’s a reason for that: in every one there’s something missing. Nicole is missing some chibis and some extra artwork. Roommates some artwork, the main soundtrack, some writing. Planet Stronghold 2 is still missing a good amount of writing, some art (the talk poses) and good part of the RPG framework, plus GUI work.

In some cases is people’s fault, in other simply the job takes time to make, or is my fault because I waited too much to hire the right person for the job or planned the project badly.

But no matter the cause, every indie is in this situation, unless you make games that you code yourself using pixel-art / poser to do the graphics. In that case you might be able to do everything on your own, like I was doing in the beginning. No delays ever except for my own, but the results were much worse, since obviously I’m not a good artist nor a great writer!

So I wrote this post to say that even if a game is 90% done, sometimes that last piece of art, music track, writing scene, gameplay tweak, might cause big delays on a game release. That’s why when people ask me when a game will be out I always use the conditional “it SHOULD be out…” 😉

I realized that we’re already in May, so at this point, as I said to a recent interview I did a week ago, my main goal is to release one RPG this year! Since I have the feeling that with the first Loren game everything went smoothly, all pieces fit together very easily, but I didn’t notice it until I started working on new RPGs and difficulties started to arise 🙂

Meanwhile, here’s a short video of Nicole so you can get an idea of the art and writing. The GUI artwork is still temporary placeholder of course!

7 thoughts on “The last missing piece”